iZombie: Dead to the World 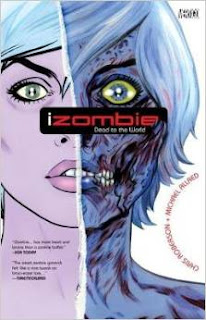 iZombie: Dead to the World

It’s hard to assign a label to this work: on one hand it’s teen angst title as they work through the social awkwardness and on the other it’s a monster title.  The opposite of Buffy I’d be willing to suggest.  We’re introduced to a world where the undead and arcane appear everywhere but are presented as the boy and girl next door.  Everything is tongue and cheek, including a werewolf that turns into a terrier lycanthrope and an undead hunter that just wants to get a life.

The characters are quirky and easily likeable in this off framework that’s established; what’s not to like about an attractive zombie who works and lives in a graveyard to keep herself on a steady diet of brains?  Dialogue is fast and snappy, coming off whitty and original like everything about this series.  Sustainability comes from our lead Gwen’s ability to absorb a dead person’s memory when she eats their brains: this will lead her on a regular series of mystery adventures and allows for a long running ongoing series.

Art is solid Mike and Laura Allred.  Mike presents clean lines and thick outlined inks while Laura gives her muted and slightly blurred colours.  Great looking character design and right up their alley; odd monster type characters are the norm in their creator owned Madman.
Posted by John "Zanziber" Rogers at 6:00 AM
Email ThisBlogThis!Share to TwitterShare to FacebookShare to Pinterest
Labels: Reviews