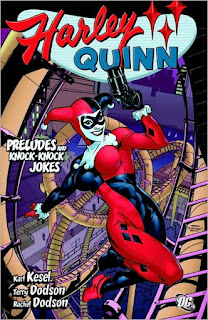 Superhero comic industry conventional wisdom has long held that supervillains simply didn’t work as the stars of their own titles.

In the good old days, this was due to the fact that villains generally had to get punished for their crimes at regular intervals, and apparently it was somewhat frustrating to end every single issue with your lead either being hauled off to jail or seemingly killed in an explosion or something (The classic example of supervillain comics being untenable is probably DC’s 1975 Joker, which lasted just nine issues).

I assume supervillain comics—or at least ones of the ongoing, monthly variety—are still really hard to make work, even if there’s less of an emphasis on good-always-triumph, crime-never-pays morality in super-comics. Nowadays, the most popular villains have motivations that make them poor leads: A comic about a villain robbing banks and avoiding capture might be rather thrilling, but how do you do a comic about a character’s whose goal in life is to, say, kill his archenemy?

I don’t know. But in 2000, writer Karl Kesel seemed to have figured it out, making the then-new-to-the-DCU character into the star of her own monthly comic, one that lasted some three years and 38 issues (Well, Kesel himself only handled the first 25 issues, but still!)

The first seven issues of the title were collected and released in a 2008 trade paper back entitled Harley Quinn: Preludes and Knock-Knock Jokes (Title sound vaguely familiar? It’s supposed to).

Back in 2000, Harley Quinn was familiar to Batman fans from Batman: The Animated Series (for which Paul Dini and Bruce Timm created her), and the various DC comics set in and around the “animated continuity” (Most notably 1994’s excellent special, Mad Love, by Dini and Timm). In late 1999, she was officially introduced into the DC Universe continuity, in a prestige format special which gave her an origin and superpowers. A few appearances in a few books later—this was around the time that the Bat-books were involved in the big “No Man’s Land” storyline/status quo—and BAM! Solo book.

Kesel’s approach was to keep things admirably light and fun. The Joker is still a psychopathic serial killer surrounded by hardened criminals and lunatics (like our protagonist), but Kesel established a tone similar to that the animated series that spawned his star.

A great deal of the violence is implied, talked about or otherwise danced around (One henchman has his head blown off, but the wound is obscured by someone standing in front of his body, rather than earning a detailed splash panel). The Joker and Harley are genuinely funny—even if occasionally just corny funny—and there’s not a whole lot of effort into making the book realistic, or dwelling on the sort of real world concerns that can destroy comic book stories. (You know that The Joker ogn? This is absolutely nothing like that).

Basically, Kesel writes as if he were writing the characters from and episodes of the animated series, only setting it in DCU continuity.

The book similarly benefits from its structure, which is a bit of a beaded-necklace of done-in-ones (or two’s), with connective threads holding them together.

The first issue begins with Harley and The Joker at their more-or-less default setting. She rescues him from Arkham Asylum and they begin a crime spree together, with him trying to bump her off and she eventually taking him down in self-defense. By the end of the first issue then, she’s Joker-less on her own.

From there she tries being second banana to Gotham’s next biggest supervillain (Two-Face), hosts a party for female supervillains, starts her own gang to break her pet hyenas out of the zoo, pulls off a heist at The Finger Warehouse (seen in Neil Gaiman and company’s Riddler story from Secret Origins Special #1) and, in the books only two-part story, attempts to rob Wayne Manor—at the same time The Riddler and his gang attempt to rob it (And with the Bat-people all busy, Oracle’s forced to call in then-Justice Leaguer Big Barda to save the day).

While Harley’s starting over as her own first banana in these stories, a foe she makes in the first issue has assembled a team to track her down and catch her for him, and Kesel imbues these characters and Harley’s gangmembers with strong personalities and individual voices (even the least rounded of them have a distinct character trait or tic to call their own).

It makes for interesting reading, but it’s the tone Kesel establishes that makes the book sing. It’s serious without ever being too serious, light-hearted and funny without ever being zany; it takes place within the greater DC Universe without being obsessed by continuity, and perhaps most remarkably given the general trend of Batman books over the last few decades, it’s fun and exciting rather than grim and gritty.

I think Kesel’s plots and dialogue probably could have established this well-balanced tone with different artistic collaborators, but the fact remains he has rather ideal ones in the form of Terry and Rachel Dodson.

The volume opens with about a half-dozen pages of perfect Bruce Timm homage (I actually checked and re-checked the credits to make sure that these pages were actually Terry Dodson working in the “animated” style, the aping of it is so perfect), so the book literally moves from the animated universe into the DC Universe.

The Dodson’s working in a perfect compromise style between cartoony and serious—the art is round, smooth, somewhat flat and devoid of unnecessary filigree, but the character designs are never too terribly exploded or exaggerated.

The worst you can say about the Dodson’s designs here are that all of the women are built just like Harley Quinn, but that’s certainly an effect they were intentionally going for. While there’s little of the out-and-out fan service and exploitive posing seen in the current Harley Quinn book, Gotham City Sirens, there’s an awful lot of cheese cake, of the wholesome, good girl variety.

I didn’t read this series at all when it was originally being released—I think the Our Worlds At War special guest-starring Jimmy Olsen and featuring art by the likes of Paul Grist and Amanda Connor and an issue guest-starring Martian Manhunter I found in a fifty-cent bin was the extent of my exposure to the title before now—but I was pleasantly surprised at how accomplished it was.

A large part of that surprise was due to the fact that it seemed like Kesel actually wrote a better Harley Quinn than Harley’s creator Paul Dini did (Since he started writing DCU comics regularly, Dini reformed Harley into a Catwoman-like bad girl hero). That, and I was surprised to see the Dodsons drew almost every page of this issue, save a handful near the end that Craig Rousseau penciled (in the animated style, inexplicably). When the Dodson’s became the “regular” art team of DC’s relaunched Wonder Woman title in 2006, they drew only the first four issues, and those took about seven months to come out…but then, I guess there were all sorts of problems with that Wonder Woman relaunch.

At any rate, Harley Quinn: Preludes and Knock-Knock Jokes—great stuff. I’d love to see DC continue to collect the series for a while, if only because that would be the easiest way for me to find out what happens next. Failing that, I’m sure all of these are in fifty-cent and $1 bins somewhere.
Posted by John "Zanziber" Rogers at 6:00 AM
Email ThisBlogThis!Share to TwitterShare to FacebookShare to Pinterest
Labels: Reviews