Constantine Vol 1: The Spark and the Flame 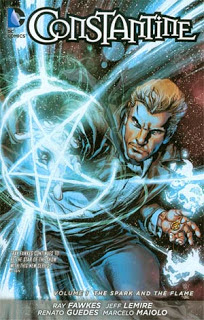 Constantine Vol 1: The Spark and the Flame

The New 52 John Constantine first appeared in Peter Milligan's Justice League Dark and I was significantly underwhelmed. Trash-talking Constantine might have bullied some of his teammates, but there was hardly the roguish anti-hero the legends spoke of. Fawkes and Lemire, however, know what makes Constantine great (or terrible, in the story, but great as a character to read) and they bring it in the first issue. Constantine recruits young friend Chris on a quest for pieces of a magic compass, and then literally sacrifices Chris so that Constantine himself can escape from Sargon the Sorceress. Indeed that's what Milligan's Constantine was lacking -- Constantine letting one of his allies die so that he could live for the "greater good."

The "greater good" is a constant theme, especially in this book's early issues. In the fourth chapter Constantine argues with rival magician (and, as I understand it, constant Hellblazer foe) Papa Midnite, both that Constantine stealing from Midnite was an effort to help "protect" him from other enemies and also that the two should stand together against those enemies. Earlier, Constantine had run afoul of the Spectre, but managed to avoid his death by convincing the Spectre that Constantine is the lesser of two evils -- that the evil Constantine does is less than the evil he ultimately helps prevent. There is an arrogance to Constantine here, that if he does something wrong it must actually be right, that's eminently appealing in a character irrespective the universe.

Constantine's explanation to the Spectre is hardly an apology, to be sure, as not an issue later Constantine causes a monster to put out an old man's eyes, again to defeat his foes. If Fawkes and Lemire mean us to understand Constantine holds any guilt over his actions, it's only subtly, in the fourth, quieter issue, in which Constantine's "day off" reveals he really has no friends to speak of. (One can't help but see Dotty, Constantine's landlady, in this issue as akin to Una Stubbs's Mrs. Hudson in Sherlock, and it's not a far stretch to see some of Constantine in Benedict Cumberbatch's character and vice versa.)

That Constantine generally takes place in New York and not London is most likely a writer's conceit, though the idea that Constantine couldn't have his adventures in London and still run afoul of the globe-spanning Justice League seems like overthinking it. Nevertheless, in the three-part initial "pilot" story, the writers do take us to London and show why Constantine can't be there -- that the city itself has cursed him. If such explanation was necessary, I thought this fairly clever. The London issue also offers some good horror elements; the DC Universe proper doesn't tend to do horror well, always conflated as it is with superheroes, but the sub-London of hanged bodies was pretty disconcerting.

I know Fawkes mainly from a couple issues of Batgirl that I felt were too formulaic; I was bound to change that opinion with with the first four chapter of Constantine that Fawkes wrote with Lemire, but I do note that the final two issues by Fawkes alone are the least strong of the book. I appreciated that the sixth issue brought back Chris in ghostly fashion; I expected that storyline was done with the third chapter, so I was genuinely surprised to see it brought back up again. However, the chapter has by my count over a dozen pages of less interesting characters, like the villain Tannarak or Constantine's bartender fighting werewolves and demons, and only three or four pages actually featuring Constantine. This is a trend I sensed a bit in Fawkes's Batgirl, focusing on characters other than the book's main character, and I hope that's curbed in future issues.

The fifth chapter is the Trinity War tie-in issue, amusingly called (for an old JSA fan) "Stealing Thunder," and teaming Constantine with Shazam nee Captain Marvel. I remember the classic LEGION "War of the Gods" issue where Marvel fought Lobo, and the humor of the issue was seeing Marvel's extreme innocence contrasted with Lobo's sheer filthiness. Geoff Johns's new Shazam is quite a bit more of a brat than previous incarnations, and so there's an amusing but different interplay with Constantine, in that they're both jerks being jerky to one another.

The issue is problematic only because, as a Trinity War tie-in, it appears to have relevance to the Trinity War storyline, but ultimately the set-up turns out to be a misunderstanding and the issue factors into Trinity War not at all. That's bad for Trinity War, but the upside is that if you accept that Constantine and Shazam walk into a bar in the middle of the Trinity War goings on, there's not much more you need to know to enjoy the issue from a Constantine perspective.

Constantine Vol 1: The Spark and the Flame was, for me, better than it could have been, and I consider that a win though I understand others might feel more strongly. Between Constantine and Phantom Stranger, I think DC's doing fairly well with the "Dark" corner of the New 52, and I'm looking forward to the next collection of each.
Posted by John "Zanziber" Rogers at 6:00 AM
Email ThisBlogThis!Share to TwitterShare to FacebookShare to Pinterest
Labels: Reviews