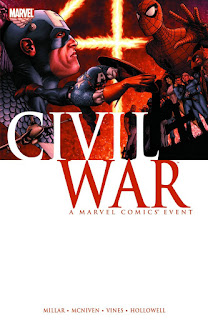 In the comic world, every now and again, there are events. These are stories when it involves most of that universe's characters, and there are usually big events that change everything, or set a new status quo. For example, DC has had several "Crisis" book, these titles were massive events with universes, realities and character's lives on the line. In these events, we saw the destruction of the multiverse, the death of Batman amongst others, and other just massive events. Naturally, Marvel has had it's fair share. Like Secret War, where the heroes were at war against each other and casualties were taken, it was also the first appearance of the black-suited Spiderman. So, needless to say, event comics are big deals.

In 2006, Marvel launched a story called Civil War, which promised to pit Marvel's heroes against each other over their ideals, and nothing would ever be the same. Marvel delivered this, and it started out strong, but teetered out to a rather surprising conclusion (not the best though).

The story starts off with a group of young superheroes, The New Warriors, trying to make a name for themselves, try to take down some powerful super villains. This results in a massive explosion that takes out a neighborhood, including an elementary school while class was in session. We see the superheroes show up immediately to help with the clean up. This event was the last straw, and now the public and government have had enough of the superheroes and want them to go away. Tony Stark, getting a wake up call, negotiates with the government and after long discussions, they reach a conclusion. The Superhuman Registration Act would go into effect, forcing all superheroes to reveal their secret identities and become agents of the government, their workers essentially.

Iron Man, with Mr. Fantastic and Yellowjacket by his side, lead the push for the Act, realizing this was the only way superheroes would be allowed to legally do what they do. While Captain America leads the resistance of heroes who believe this Act takes away their rights and makes them simply tools of the government who have to obey their every command. The 2 sides clash over their ideals, bringing in a lot of big superheroes to take sides.

Ok, let's break down what went wrong. Now my first point is something Marvel messed up with their recent event, Avengers vs X-men: both sides were not given a fair chance. What I mean is, it was clear after the first issue, who Marvel has villainized and who has made who they want to win. If you want to make a compelling hero vs hero story, make both sides believable. Make people torn between choosing which heroes they want to follow, have both sides have equally just arguments that you can get behind and understand their points. Civil War does not do this.

It is clear after Captain America's argument with Maria Hill in the first issue, that Captain America's resistance is in the right, and that the side of registration will be the bad guys. Now, registration was a bad thing, and it should not have gone through, but if you really wanted fans to pick sides and get behind the conflict, the registration side should have been more than Iron Man working for the jerky government and doing what ever it takes to take down the resistance, no matter how despicable the methods. So the whole story, you are cheering for the resistance, and it just becomes another good vs evil story, not a compelling war.

Next, humanity. What. the. heck? Seriously, humanity looked like a bunch of ungrateful jerks throughout this story. Yes, the bombing was a horrible thing, and they shouldn't just sit back and take it on the chin from the supers like that, but come on! The humans come down REALLY hard on the heroes, you know, the ones who protected their worthless butts time and time again from certain destruction. I'm all for them saying that the heroes should train the younger and inexperienced heroes to prevent this kind of recklessness, but they wanted to go away for good!  You know, in a world where Doctor Doom or Red Skull could destroy them all in an instant. Because getting rid of their protectors makes sense. Even when that didn't go through, they wanted them to become soldiers of the government and reveal their secret identities, which Spiderman foolishly did. It was just incredibly frustrating to see the people being such unreasonable and unrealistic jerks. I almost wanted the heroes to take a vacation so that Galactus could come eat the planet or something.

The worst human amongst them, was Mr.s Sharpe. She was a mother of one of the children who were lost in the bombing. Yes, this woman lost so much in the attack, and she is unstable. However, this woman was downright annoying. She goes after Tony Stark at the funeral and blames him for everything. She became the focal point of Tony supporting the Act, forcing the downfall of Tony (more on that later.) Why this woman?! It would have made more sense if Tony showed support towards all of the families, or if he did speeches for all of the lost children. However, Mrs. Sharpe and her un-called for attacks on Tony, were right next to Tony at conferences, he even brought her on the Helicarrier. Every time she was on the page, I groaned, because I just hated her existence. I know she was supposed to represent the grieving families, but it could have been handled better.

That brings me to Tony himself. My gosh, why did Mark Millar (writer of this story) do this to you? It didn't seem like Tony was himself. Sure, he has been shaken up about everything, but he has gone through worst in his past, and still seemed like himself. Tony was so willing to take down his former teammates and lock them away forever. We saw moments of hesitation, like when he offered Daredevil freedom if he joined his cause, but then we saw him willing to cave in Captain America's skull. Tony was one of the reasons it was hard to get behind the registration, because Tony and his fellow partners, Mr. Fantastic mostly, were just asses who didn't care about past experiences and friendships/relationships, because this Act was now everything. Nothing else mattered. Mr. Fantastic almost ruined his marriage because he was excited about their plans to imprison the resistance and ruin what superheroes stood for. What a couple of jerks. They were even willing to enlist supervillains like Bullseye and Venom to get the job done. Villains they know would have no problem killing anybody. That was the biggest WTH moment of the book. Matt Fraction would go on to write Iron Man a little over a year later and redeem him, but Iron Man in this book was such a disgrace of the character. Even worse than Iron Man 3, yes that is possible.

Captain America and the resistance are not completely innocent either. His reaction to The Punisher's involvement was a little unnecessary, but it wasn't out of the realm of possibility.

Last complaint, the ending. Marvel has a reputation of butchering the endings of their event stories, and this is no exception. In the final battle of the story, we are getting the ending we want. There are cameos we wanted and seeing the good guys come out on top. Then...the humans...interfere (without spoiling anything), then in like 2 pages, the story abruptly ends without a lot of resolution other than, everything still stinks. We were building up such a big story with big resolutions, and the story flatlines. One side loses, one side wins, it just happens, and it is such a let down. Now I wasn't mad about the ending and think that it ruins anything, but it just stopped and I think it could've gone on.

Minor note: where was the Hulk, Ghost Rider and Moon Knight? They were featured in the advertisements, and Hulk and Ghost Rider don't just blend in the background.

Now for I did like, the art is beautiful. The characters and facial expressions are fantastic and highly detailed. In the battle scenes, they were impressive. Cloak is a teleporting character who uses his...cloak... to cover people and move them, these effects were stunning. I also really liked Spiderman's new Iron Spider costume, that was incredible. Also, when people took a hit or punch to the face, it showed. Iron Man and Captain America laid the smackdown on each other, and they looked it. The art had a serious and sort of dark tone to it, which was fitting for the story.

Also, Captain America was great in this story. He didn't accept flak from anyone, and he was the strongest character of the book. He was willing to take in people from Tony's side, and didn't want to fight. While Tony and registration hunted them down like dogs, you know what the resistance did? They stayed underground and still fought crime, capturing super villains and saving people. AND THESE ARE THE ONES THE PEOPLE WANT TO LOCK UP OR GO AWAY?! That is severely illogical and a blatant disregard for sanity. Captain America stayed a consistently great character and led a faction of characters that continued to shine in the face of the rest of the world being schmucks.

The battles are also great. Intense and sometimes downright gritty action happens several times and it is great to see. It isn't typical over the top comic action. This seemed like explosive, gritty street fighting, and it was awesome.

Overall, past all of the complaining, I do enjoy Civil War. While the argument was one-sided, it was still great political drama, and it spoke out against how the government does things. The art is gorgeous and the characters are incredibly strong. Captain America was the best part of the book, and it was a strong read. It is just a shame that there were so many flaws with the story. Iron Man is one of my favorite heroes, but in this book he was written as the antagonist, a position I never wanted to see Tony in. I recommend reading Civil War, because not only was it an enjoyable read, but it set a big status quo, in other books after it. This was like the equivalent of reading Harry Potter 1-6. You get a lot of set up and change, you will just have to read what comes after it to get the resolution.
Posted by John "Zanziber" Rogers at 6:00 AM
Email ThisBlogThis!Share to TwitterShare to FacebookShare to Pinterest
Labels: Reviews