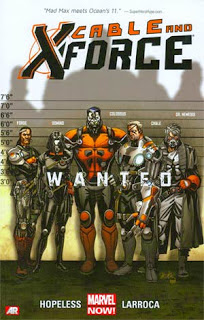 It’s apparent that for the Marvel NOW! initiative, the X-editors couldn’t figure out what format to use for X-Force. On the one hand, Rick Remender’s weirder and more continuity-laden Uncanny X-Force had been a hit. On the other hand, readers were clamoring for the return of classic X-Force characters, especially since Cannonball and Sunspot had been upgraded to Avengers. As a result, they made an interesting decision: “Let’s try both and see what happens." Unlike the multiple Avengers titles, there’s not a wide enough readership for multiple X-Force books, so there was a sense that only one format would survive. Dennis Hopeless and Salvador Larroca’s series won, at least in the sense that the books merged into a team led by Cable after a crossover. The first volume is Cable and X-Force Vol. 1: Wanted.

While Uncanny X-Force had the star power of Storm and Psylocke, it also shared them with Astonishing X-Men, Adjectiveless X-Men, Wolverine and the X-Men, and the other books based out of the Jean Grey School. The idea of a private X-assassin team operating out of a children’s school stretches the suspension of disbelief too far. This has been a problem that Uncanny X-Force struggled with ever since its launch a few years back with the all-black outfits. Conversely, Cable and X-Force is a covert team of mutants with questionable pasts and a desire to stay away from the main teams.

A second advantage Cable and X-Force had over Uncanny X-Force was in its character selection. Where Uncanny went with unusual choices like Spiral and Puck just to keep fans interested, it’s clear that Cable knows exactly who he wants for his team and why. Domino is an obvious choice, but fixing Forge’s brain and having him become Cable’s technical support was a very cool move. The same goes for recruiting the X-Club’s resident mad scientist Dr. Nemesis -- a character left out in the cold a bit with Beast’s involvement in All-New X-Men. Hopeless used the momentum of Avengers vs. X-Men’s sales to bring in readers by having Colossus and Hope (Cable’s adopted daughter) get involved.

Colossus illustrates one of the weaknesses of the book. It’s not that the character choice was a bad one; his post-Phoenix Force regret and need for absolution is in character. But his involvement interferes with the constant flash-forwards and flashbacks that Hopeless uses to set up the team’s unusual situation. The book begins with the Uncanny Avengers catching the team in what appears to be a slaughter of innocent factory workers. By the end, we know who the truth, catching up to what the Uncanny Avengers are seeing ... and then the final issue in the collection skips forward again to an uncertain point. This is where the Colossus issue comes in: he was a crucial part of X-Force’s infiltration of the factory, but we never see the infiltration happen. I have a feeling that this was intended to be a six-issue arc instead of five and the change came too late for Hopeless to revise his plotline.

I’m a little split on how Cable acts in Cable and X-Force. Hopeless does nail his characterization as a weary warrior with a heavy dose of PTSD, but he also changes Cable’s power set and gives him a new mechanical arm instead of a techno-organic one. I gave up on Cable and Deadpool because they kept screwing around with Cable’s powers so I’m always a little nervous when this kind of thing happens. On the positive side, the idea of giving Cable precognition is a creative one, especially when it’s clear that it’s indicative of a bigger change. A proactive X-team with a psychic leader who can tell when and where exactly to strike is something that X-Force should have had long ago. There are some other minor quibbles I have with the characterizations; Domino seems too eager to restart X-Force, while Hope seems overly emotional.

One last choice put Cable and X-Force ahead of Uncanny X-Force from the start: the art team. I have nothing against Ron Garney, but as someone who misses Invincible Iron Man dearly, it was a treat to see Salvador Larroca and Frank D’Armata creating the artwork here. D’Armata in particular sets up some clever color work, illustrating flashbacks with bluer tones compared to oranges in the present. There are moments when the art seems washed out but it works for a war-heavy comic. Larroca really gets to let loose in depicting “The Girth,” enormous zombies created by a food-borne virus. They look horrific on their own, and it only gets creepier as they combine.
Posted by John "Zanziber" Rogers at 6:00 AM
Email ThisBlogThis!Share to TwitterShare to FacebookShare to Pinterest
Labels: Reviews