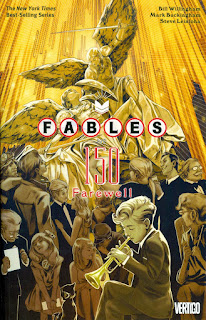 “Fables” #150 begins by jumping a head in time and we see that our narrator is Ambrose Wolf, the child prophesied to “judge the rest”. He’s a writer (naturally) and is working on what he refers to as the last volume of his history of the Fables in the Mundy world. This takes us to New Camelot, where Prince Brandish has defeated Lancelot in combat and in typical Brandish fashion, he’s gloating about it. Flycatcher decides to take things into his own hands and challenges Brandish to another combat based on charges he brings up against him with the power he holds in Haven. The core of this story is two fold, Bigby is still feral and Rose Red is still bent on destroying her sister. On top of this, “Fables” #150, that also acts as the final volume of the series, is full of one page final stories for almost the entire cast including the final fulfillment of all the Wolf children’s prophecies.

The last arc of “Fables” found Snow White and Rose Red fighting each other and what we learned was that this was always going to be their destiny. They were from a very magical line and all groups of sisters in their family eventually fought each other to the death to completely own the magic. Snow and Rose are next and Rose Red has pulled out all the stops to defeat her, including using Bigby Wolf as a weapon. Fabletown was also being divided into two camps with Totenkinder taking the side of Rose Red and Cinderella taking the side of Snow White and this too was something that needed to be wrapped up.

Willingham and Buckingham wrap things up very neatly and Totenkinder and Cinderella have one of the most brutal fights in “Fables” history. These two women were undeniably the warriors of Fabletown but worked in very different ways. Totenkinder was about loyalty to people and Cinderella was something similar to Captain America in that her loyalty was always to Fabletown itself. Both of their different skill sets are on full display, with Buckingham creating some of the best action heavy artwork he’s done in the entire series, and their endings pack a huge emotional punch that while sad, is still very fitting for the two of them.

Bigby’s faceoff with his family could have ended in disaster and it would have arguably ruined the ending as a whole and this is where the almost too tidy feeling of the wrap-up works. He spent so much of the later part of the series killing and all it took was for Connor to stand up to him and begin to fulfill his fate as a hero to make Bigby snap back to reality. I won’t like and say that I didn’t want Bigby to make it out of this unscathed but this happens almost too easily.

When you look back at what’s happened in the series thus far, everything was always going to end up right here with Rose Red and Snow White facing off. From the first issue of the series, they were at odds and even when things were good, there was always something lingering in the background. Snow always thought of herself above her sister and as Rose became more powerful, more loved and more responsible Snow became more defensive. Her power slipped away and Rose became more resentful towards her sister for how she felt. Willingham and Buckingham planted the seeds from the beginning and the payoff ties into a bigger theme that “Fables” has played with a bit before. War is ugly, war is oftentimes pointless and people die needlessly. That’s what ultimately happens in the conflict between Rose Red and Snow White. It wasn’t only about them and so many other characters died because of their fight. Beast, Ozma and more died fighting in what was their conflict but unlike real wars, intelligence and compassion won. Many people will call how their fight ends anti-climactic and they may say that these death ultimately meant nothing but it’s a statement about what these fights do to people. It also acts as a great illustration of how these two characters aren’t perfect but eventually get to the right place and do their best to try and fix things before it goes too far.

Mark Buckingham is as important to the success of “Fables”as Bill Willingham and maybe even moreso. “Fables” has been a fantasy book from the beginning even if the tone changed depending on the storyline. “Fables” #150 features Mark Buckingham doing some of his very best work from the panel layouts to the backgrounds. Buckingham lays out a lot of the pages in his main story with long columns and there’s a sense of urgency because of it. This story is almost over and there’s a lot to get to so the art moves across the page quickly. Buckingham however doesn’t rush his craft and each column is detailed so nicely with some of the action overlapping into the next panel. The fight between Cinderella and Totenkinder is something right out a disaster movie with massive explosions and a real sense of danger. It’s a gorgeous sequence that reminded me of the final battle in Harry Potter and the Deathly Hallows Part 2 because it was a visual representation of the ending and a new beginning for these characters.

There are a few huge splash pages throughout the main story that are absolutely breathtaking because of how grand they are. Buckingham features some of the characters in big close up scenes on these pages with detailing done from their hair to the finer points of their armor. Their facial expressions, especially in the eyes are full of emotion and in Rose Red’s case in her huge moments, the feeling of determination comes right through. There are a couple of splash pages featuring some of the giant creatures of The Farm and he takes his designs to the next level. With some of these characters on Rose Red’s side of the “war”, they come off far more menacing than usual. The backgrounds on every page give us the proper setting and nothing ever feels very static in that sense. So many artists do this weird thing where action seems to take place on just a color block without any context. Buckingham takes the time to build every single scene. The final pat of the book “The Last Snow and Bigby Story” features a massive gatefold that is easily the greatest thing Buckingham has drawn.

Lee Loughridge on colors with Steve Leialoha, Andrew Pepoy and Dan Green on inks are vital to the success of this book. The inkers add a nice amount of depth to the pencils and never overdo it, allowing Buckingham’s pencils and designs to shine through. Loughridge, one of the best colorists working, does a wonderful job with light, fluffy colors that aren’t at all too much. Even the golden avatar of hope isn’t overwhelmingly yellow and the explosions in Fabletown are layered in a nice way that makes it feel a bit more authentic and cinematic.

“Fables” #150 is a massive book coming in over 100 pages that features multiple artists working with Bill Willingham to tell the final stories for many different characters. I won’t go into every single one, because if I did this review would go on forever, but none of them are truly pointless. Each one adds something to what happens next for this world of characters because the story doesn’t end when Rose Red and Snow White end their fight. The world changes in a huge way thanks to the destruction of Fabletown and each of these stories shines a small light on what came next. We also get the final say on each of the Wolf children and how they meet their fates. Mike Allred, Joelle Jones and Aaron Alexovich are some of the artists who’s pages stand out the most because of their very unique styles.

The final couple of pages will undoubtedly bring a tear to the eye of all “Fables” fans because of its focus on the most important romance of the entire series. Bigby Wolf and Snow White get their day in the sun and they get a happy ending. It’s not easy for them to get to but for someone like me, who rooted for them since day one, the last line of dialogue between them moved me. It was beautiful and spoke to so much more than just their love.

Where does “Fables” rank in the history of comics? I don’t know if that answer is known to us just yet. There’s no question that it has a firm place as one of the best fantasy series comics has ever seen and it’s won many Eisners but as far as the pantheon of comics goes, I don’t know. Now that it’s all said and done, there will be a group of readers who will decide that by borrowing trades from their local library the way I did. They will fall in love with it and they will determine where this book ranks among everything else.

“Fables” ended up being a piece of the history of these characters but what we learned from them will stay with fans forever. “Fables” in many ways taught us about the passage of time, loss and being able to live with all of it in a healthy way. People come and go, life moves on but we will always have the memories of the moments that mattered most. Prince Charming’s heroic sacrifice in the Homeland, Flycatcher’s journey to becoming a King, Boy Blue’s death, Snow White’s leadership in tough times, Cinderella’s constant sacrifices for Fabletown and even Dare’s death that ultimately saved his sister all mean something to the readers in ways that can’t be forgotten. These things shaped so many of us as comic readers over the last 13 years and this final volume is for us. I’ve never experienced a time where “Fables” wasn’t on my monthly pull list and it’ll be a tough adjustment but I couldn’t think of a better way for the series to go out.