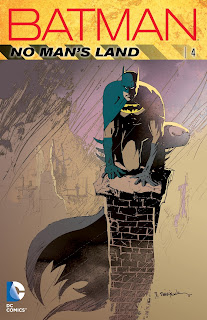 Volume 4 is a rather sloppy finale to the No Man’s Land saga. It never quite builds enough momentum and often repeats plot points over and over again verbatim because the story was told in multiple titles that are all collected here. That gets pretty annoying pretty fast. However, volume 4 also features some of the very best chapters that this epic had to offer like a devilishly clever Joker attack, Two-Face’s kangaroo court, and the reconciliation between Batman and Jim Gordon that is one of the most memorable moments the two characters have shared in their entire history.

Okay, so first I should probably address my claim of this book being “sloppy” and one of the best examples of that I can lay out on the table begins with Volume #3. The previous book ended with a cliffhanger about Tim Drake gaining fame as the innocent boy lost in Gotham City. A missing person’s case. He’s all over the news and it’s put No Man’s Land back in the headlines. What could possibly happen next? Well it’s never addressed again until the second to last chapter of Volume 4! That issue, Robin #73, shows the rescue operation to bring Tim Drake back to the mainland and reunite him with his father. It’s not a bad episode, it’s actually pretty fun. However, it took us 483 pages to get to that point and in the meantime we’ve already seen a chapter that shows Tim Drake having dinner with his pop and that would be pretty confusing to someone reading this story for the very first time.

Another instance of sloppiness is how Batman: No Man’s Land #0 is tossed into the center of the book and totally breaks the tension created by the previous chapters. This segment about Huntress back when she was disguising herself as Batgirl doesn’t belong here. Instead, it would’ve been more fitting back in volume 1 or 2 when these events were pertinent.

But the biggest problem is the repetition. You see the same exchange, dialogue and all, between Catwoman and Batman not once, not twice, but three times back-to-back-to-back. And later on there’s a catastrophic explosion that you have to watch play out twice, but sadly, even though it has greater impact on the story in the 2nd telling you don’t care because you already know it’s coming. There’s no surprise there. If anything, you’ll be confused (I was) because you would’ve thought that this event happened days ago in the story.

Those are all pretty big structural problems, but lets talk about the story itself. What is going on in NML #4. Well, Gotham is trying to recover. The government is on the verge of lifting the No Man’s Land blockade and Lex Luthor has his sights set on taking over most of Gotham’s real estate (although I’m sick of seeing this guy pull real estate schemes in the movies, this instance actually fits quite well). Do I like the Superman connection? No. Not really. I would’ve been happy with some other Gotham related character doing the deed. Reminding me that Superman exists destroys my suspension of disbelief. I addressed this in the other reviews when Superman came into play, but come on… after watching the Death Battle episode recently with Goku vs. Superman, the idea that Superman couldn’t clean this whole mess up in 2 seconds is ridiculous (I know they try to make the point that a quick-fix can’t solve Gotham’s problems, but in this volume Luthor offers exactly that, a quick fix, and everything works out fine).  Thankfully there aren’t too many extended DCU references in this work. Dr. Fate gets mentioned once, but unlike previous volumes the Teen Titans never visit and nobody writes another inept Superman into the tale just to make Batman look better.

Speaking of Batman, he’s not really in this book very much. In fact, for most of No Man’s Land he’s standing over Oracle’s shoulder or showing up to a fight at the very last minute before telling his team what needs to be done next. So it could be argued that No Man’s Land is actually more about the bat-family than it is about Batman himself. However, the moments where we actually see Batman, those are easily the best and it starts with the very first chapter about Leslie Thompkins. Leslie is a shamefully underused character in the New 52 so it’s great to see her used so well and so often in all volumes of No Man’s Land. There’s a tender moment between Bruce and Leslie here and it brought back fond memories of Batman: The Animated Series, which also utilized Dr. Thompkins beautifully. When will we finally see this character on film? Nolan’s films seem to have given some of her characteristics to Rachel Dawes, but I want to see the kindly old lady, dammit. Other than Batman and Leslie, another character who shines in No Man’s Land is Commissioner Gordon. When talking about great Jim Gordon stories we often hear Batman: Year One get thrown around along with Black Mirror and maybe Gotham Noir (which is alright until you think about the twist and then that whole book falls apart). But really, No Man’s Land deserves to be on that list and ranked quite highly. Gordon stayed in Gotham when Batman didn’t. He also helped hundreds of people survive, fought wars, was destroyed by how the rest of the world saw him and rose back from that to become an even greater hero figure.

As you know, The Dark Knight Rises and Batman: Arkham City borrow pretty heavily from this saga and if you loved the hospital scene between Bruce and an injured Jim Gordon in “Rises”, you’ll adore Legends of the Dark Knight #125 “Falling Back” as much, if not more. Personally, I think this is an instance in which the comics did it better. For one, Gordon wasn’t dazed from medication and actually got to speak to Batman man-to-man about how abandoned he felt. This is not only an emotionally powerful segment, but it breaks down the Batman/Gordon relationship nicely. There are two other great Gordon chapters, but I’ll only go into one of these because saying what the final one is could spoil things for someone who has never read these comics.

Two-Face’s kangaroo court. Out of all the stories that cut out Batman entirely, this is the one that function the best. Not once did I get bored or wish I was watching Batman do whatever he does when not bossing everyone else around. No, the drama of Gordon being put on trial was more than enough. It’s not only a good story for Jimbo, but we see plenty of Renee Montoya and Two-Face is at his craziest.

As for the other characters…

Nightwing and Oracle have a story of their own here as well. A two-parter that dives into their romance too, which was fun to read since it’s something that’s hardly been addressed in the New 52. Seeing the damaged Barbara push away Nightwing is heartbreaking stuff.

Azrael hangs out with Batgirl and the two of them seem to be the only ones who try and keep the peace in this town anymore. In fact, Batman sends Azrael after the Joker. THE JOKER! I don’t know why Batman put so much faith in Jean-Paul Valley in the 90’s but he did. Once again, Nightwing is overlooked and all hope is put into the guy who was raised in a bizarre Christian cult that trained him to be a killing machine.

Lucius is probably the one working the hardest and causing the most change because he’s the one on Capitol Hill doing everything he can to bring Gotham back into the embrace of the United States. It’s odd though to see Batman hiding his identity from Lucius, though. After the Nolan films and the recent Batman Incorporated stuff it feels like Lucius should absolutely know who Batman really is under the mask. It would make life a lot easier on Bruce.

Catwoman is fighting robots, gets her origin story elaborated on (it’s a lot better than the New 52 issue #0 version), and plays games on Penguin and Lex Luthor. These chapters can be skipped, really, especially the stuff that repeats beats from Azrael’s comics.

And the Joker… The writers behind No man’s Land never really found anything for Joker to do. Instead they seem deadset on not letting him do much of anything simply so they could save him for the climax. They even go so far as having Bane and Mercy (henchgirl from Superman: The Animated Series who made her comic book debut in No Man’s Land vol. 3) go on a mission to track down and kill the Joker and they actually have him. 100% could kill him, which was what they were sent to do mind you, but suddenly Mercy decides to just let him go because “He got the message.”

Thankfully, when Joker does show up again the the final quarter of the book we get some pretty fantastic scenes. The battle between Joker and Petit’s forces is easily one of my top 3 moments from the entire saga and a must-read.

Other villains don’t get quite as much attention. The focus is instead on Lex Luthor and Batman’s plan to use him to save the city and then kick him out before he can take control of it. It’s a good plot line but I wish someone like a Roland Dagget type character would’ve been used instead so it would’ve been a pure Batman story without the distraction of knowing it exists in a world where magic and super powered heroes are an option.

The saga doesn’t exactly end in epic fashion. It instead closes in tragedy and the notion that help is on the way and the worst is over. The cleaning-up of Gotham happens very quickly and that didn’t sit too well with me after all the struggle witnessed in previous chapters. It didn’t feel natural. What it felt like was DC said “That’s enough of the dystopian stuff, make everything normal again.” and so it was.

There are a few diamonds in all of this rough, but overall Volume 4 is yet another horribly unbalanced read. No Man’s Land is one of the most awesome concepts for a Batman story but it appears as though the creatives behind the scenes were not well coordinated in what the saga would ultimately be. Batman is hardly in this book, the ending arrives far too abruptly, and after 4 whole volumes worth of buildup that can be pretty unsatisfying. Still, there are some must-read chapters here. Greg Rucka’s segment about Batman asking for Gordon’s forgiveness is one of the best Batman stories of the past 20 years and the tragedy that befalls one of the book’s heroes near the end is deeply saddening.

I used to think that No Man’s Land was a classic but after reading it all these years later and really analyzing it I’ve found that I’m more in love with the idea of No Man’s Land than I am the actual book. If anything, I’m now wanting to go back and read the novel by Greg Rucka again, which was what exposed me to No Man’s Land in the first place. From what I recall it focused more on the true Batman characters and Superman and Azrael entirely. Perhaps what No Man’s Land needs is a remake. Studios do remakes of TV shows and movies all the time, so why not a comic book arc? There is something truly captivating here in No Man’s Land but the comics collected in these 4 volumes barely scratched the surface of a premise that ignited the imagination of an entire fanbase.
Posted by John "Zanziber" Rogers at 6:00 AM
Email ThisBlogThis!Share to TwitterShare to FacebookShare to Pinterest
Labels: Reviews