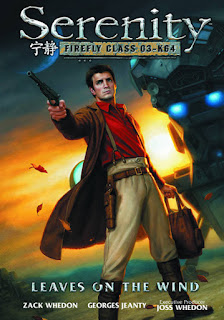 The series starts about 9 months after the events in the Serenity movie revolves primarily around the same characters.  This story starts with it being made clear that the transmission from Mr. Universe did make it out to the public, and the Alliance is working to minimize its effects while trying to hunt the crew down.  Additionally, as revealed in other comics taking place more immediately after the movie, Zoe is pregnant with Wash’s child.  Complications during childbirth force Mal to take Zoe to a doctor.  The ship and crew narrowly escape capture after having to come out of hiding, but are forced to leave Zoe behind, alone, to be healed.

The series of comics also creates a new storyline by having a resistance group form after seeing the transmission; this storyline allows a new character to be added to the crew.  The comics also explore the storyline of River’s past, which allows some familiar faces to be brought back and new foes and dangers to be introduced.

The only ding I gave this book is for that slightly off vibe I got in general from the characters.  I tore through it in one sitting and immediately wanted more (hint, hint, editor-in-chief).
Posted by John "Zanziber" Rogers at 6:00 AM
Email ThisBlogThis!Share to TwitterShare to FacebookShare to Pinterest
Labels: Reviews