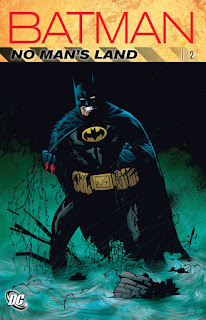 Like the last volume, #2 starts off strong with all the warring gangs and infighting among Gordon and his cops. Two-Face is rising to power and we are also introduced to Cassandra Cain, although it seemed kind of odd that she wasn’t mentioned at all in the previous volume. Looking past that it’s still pretty interesting stuff and seeing Two-Face’s plan unfold is even more riveting. The only thing I could’ve done without in his grand scheme was the use of a villainess named Echo who felt (and looked) like a blatant knock-off of Marvel’s Black Widow.

The book has a very heavy tone that’s great for the material until page 95 when Young Justice: No Man’s Land is inserted into the collection. It’s very over the top and goofy with Lagoon boy (says things like “Beats the kelp out of me!”, Superboy (Not the brooding emo Superboy of today, but a leather jacket wearing, girl crazy Superboy), Impulse (Flash boy), and Robin taking a “road trip” (that’s the title. Seriously, that’s the title) to Gotham for a little adventure. This story felt horribly out of place, as did the artwork which was cartoony in nature. It felt more like an episode of Tiny Toons (which actually had Paul Dini as a writer…everything ties back to Batman) than a chapter in the story of Gotham’s darkest hour. So don’t let the name fool you, it’s nothing like the Young Justice show on Cartoon Network, which is actually quite good.

Volume 2’s heaviest emphasis is on the allies. Whereas they were used hardly at all in the last book, this time they are seen more than The Dark Knight himself. In fact, as soon as Batman orders Oracle to “Call them.” Azrael, Nightwing, and Robin appear almost instantly. It makes it seem way too easy to move around Gotham or worse, in and out of Gotham. And if it’s that easy to move in and out of the city, why aren’t they trying to free some of the people who didn’t get a chance to flee on evacuation day all those months ago? Bruce Wayne could secretly hire an entire militia, bring ’em in, give them orders not to kill anybody, and clean up the streets in a pretty timely fashion if it’s this simple to traffic the good guys inside.

The first bat-family adventure (I’m not counting “Road Trip” because that should just be ignored. It’s the Star Wars Christmas Special of the No Man’s Land saga) features Nightwing and Robin teamed together and it has some nice character moments and funny banter but it wasn’t much of a story. Robin and Nightwing walk around the sewers until they run into a bad guy, beat him up, and continue walking around the sewers. The end. Which makes their sewage trek a prime example of my problem with these cross-over issues: practically none of them progress the plot.

Nick Scratch finally makes his move and his past is explained to those readers who couldn’t get their hands on Cataclysm. He’s a pretty lame character who, in my opinion would be the first thing to go from a DC animated film. His alien (“Star Beings”) background in particular has no business in a story like NML which is at its best when being grounded as a story of human survival. I will say that since he looks so much like Aladdin Sane I read his speech bubbles in David Bowie’s voice and that made the whole episode a lot more bearable. (By the way, my favorite rarely heard Bowie song would probably have to be this. What’s yours?)

After that came a story that actually featured Batman but it unfortunately dealt with Man-Bat Jr (a kid everyone wants because he can sniff out peaches and other perishables). This story was an unfortunate diversion when I really wanted to get back to the gang wars, survivor’s tale, and redemption of Gotham City. Instead volume 2 is mostly made up of short stories that don’t add to the saga nor are they very entertaining. Only one stands out to me as being pretty good and that was about Batman hijacking the airwaves to sway public opinion back in the States.

The biggest story of the book comes from Nightwing. He must infiltrate and reclaim Black Gate Prison from Lock-Up, who used to be an ally of Batman but has grown a bit drunk with power. A funny surprise was the inclusion of the Trigger Twins from Knightfall Volume 2, who act as Lock-Up’s lieutenants along with the KGBeast. Although it’s way too easy for Nightwing to break into the prison (the story skips over that aspect entirely) everything that followed was fairly entertaining. It never recaptures the dark and gritty tone of Bob Gale or Greg Rucka’s work but it found a nice balance between the light and dark, much like Dick Grayson himself. One of the weirdest things about this 3-part story was the way the artist handled Black Mask. He basically looked like Dracula’s man-bat form from Coppola’s film Bram Stoker’s Dracula and that really is the most perfect looking Man-Bat you’re ever going to see on film (also, Dracula was played by Gary Oldman who played Jim Gordon in Nolan’s trilogy–everything connects back to Batman). These Nightwing issues also have a subplot of their own regarding a “Nite-Wing” impostor in Bludhaven and the villain Roland Desmond needing a new heart—it adds nothing but confusion to the overall NML collection and it wouldn’t have hurt to just cut those bits out. I’m sure those threads played a large role in the Nightwing books at the time, but they are very out of place here. In the end, Nightwing’s adventure is over-the-top fun, but there’s never any sense of danger. He’s taking on one hell of a task, but there’s no urgency and Nightwing himself never even seems to get tired.

The biggest Batman story of the last half of the book deals with Clayface’s plan to get rich off crops he is forcibly making Poison Ivy grow for him. I found it interesting that just like Knightfall, No Man’s Land Vol. 2 featured Socko (a puppet personality of Ventriloquist from Knightfall Vol.1), The Trigger Twins, a large 3-part Catwoman story, and a large Clay-face story. Anyway, what’s Clayface going to spend his profits on? Where’s he getting the salt to torture Poison Ivy? Anyway, it never really goes anywhere  and the way Poison Ivy brings Clayface down so easily in the end that I can’t help but wonder why she didn’t think of it 6 months ago. The one good thing to come out of this tale is a little glimpse at what Bruce was up to back in the Prodigal days when Dick was wearing the cowl.

Volume 2 is full of stories that aren’t all that interesting, but it’s the smaller side-stories that really captured my attention. Seeing Huntress try and find her place in No Man’s Land, witnessing tough-cop Bill Petit break off from Gordon’s gang to start his own tribe, etc. These are the stories that make No Man’s Land great.

The whole book ended on a fairly sour note and I just wanted it to end. First was the 3-part Catwoman story which actually featured her wearing what could have been my favorite costume if it wasn’t for the suit also including a tail and whiskers. Those two details ruin the look. Those details made as little sense as Catwoman’s heist. She’s hired by Batman to steal mysterious computer discs that will “save Gotham” but she’s stealing them from ultra bad-ass mercenaries who were authorized by…wait for it…Bruce Wayne. What? Why? It stretches for three issues and it even managed to squeeze in Queen Bee, Maxie Zeus, a mystery woman, and a buffoon of a henchman who accidentally discovers he has the super power of surviving explosions at the small price of tripping balls immediately after the blast. And when I say tripping balls, I mean he gets high. Stoned. Needless to say I forgot I was even reading No Man’s Land at this point. But the book wraps up with a final chapter that left an even worse taste in my mouth. It’s the story of how Batman brought down Mr. Freeze and his power station and it has some of the worst dialogue of any comic I have ever read.

So…yeah. These No Man’s Land books are kind of a mixed bag. If you wanted all of it, every single cross-over issue from the No Man’s Land event then I’m sure it’s a collection that’ll make you happy. But if you’re just looking for a really good read then you’ll find yourself picking and choosing which chapters are worth your time when you open this thing up. It’s clunky.

Much like the previous volume, this book collects some good stories and some bad ones but it’s not quite as balanced. There are far more stinkers in this collection that I really wanted to skip past; stories that didn’t fit the tone of the book at all (particularly the cartoony Young Justice “Road Trip” story). Still, this volume is an integral part of the No Man’s Land saga and anyone who wants to read this epic needs to have part 2 in their collection as well or part 3 won’t make any sense at all. In for a penny, in for a pound I suppose.
Posted by John "Zanziber" Rogers at 6:00 AM
Email ThisBlogThis!Share to TwitterShare to FacebookShare to Pinterest
Labels: Reviews