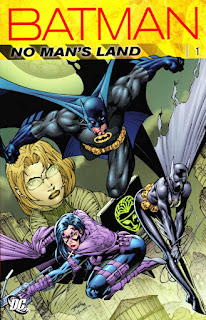 If you haven’t read the prelude, Cataclysm or Aftershock then reading the back cover is an absolute must. Everything from the first tremor to Bruce’s pleas to an uncaring congress (swayed by a charismatic alien-charged David Bowie figure…on second thought just ignore that aspect) are collected elsewhere. This book contains 22 issues altogether.

And since these 22 issues come from a variety of sources it means that this volume lacks a consistent vision. There were only 2-3 writers and 2-3 artists working on the two Knightfall issues I’ve reviewed so far but in just this one volume of No Man’s Land there are 8 writers and 11 artists! That’s not going to be a problem for folks picking up this book because they thought the previous printing lacked all the extra stuff that happened outside of Batman and Detective Comics and they like to be as complete as possible in their trade collection. But anyone reading this for the first time or folks like me who just want to sit down and enjoy a good story will see this conglomeration of creatives as having too many cooks in the kitchen. Each writer approaches the concept differently. The dystopian Gotham never feels the same from one creative team to the next. The best work comes from Back to the Future (Yes, THAT Back to the Future) scribe Bob Gale (who writes the most compelling stories here of all), Devin Grayson (who focuses on the Scarecrow as a Lucifer-esque character whispering in the ear of different gang leaders), and Greg Rucka (whose name is synonymous with No Man’s Land). One chapter will have incredible intensity and you’ll feel like these poor people could die at any moment and then another writer’s chapter makes the situation feel far less severe. It’s this way throughout all the first three volumes of No Man’s Land. It’s hard to take the story seriously when the gravity of the situation and the urgency of every act is constantly fluctuating. Often times it feels like nobody is focusing on the bigger picture. All of this extra material robs the story of its impact, it doesn’t enhance it.

The artwork goes from dark and gritty to colorful and cartoony far too often. D’Israeli’s art, while still good, doesn’t fit the material at all. His art looks more like Adventure Time than The Walking Dead meets Batman. The worst example of conflicting visions for the event is the way Joker was handled. Bob Gale did a great job of showing us a Joker who had something big planned. Joker’s portrayal was subtle, mysterious, and scary. But in the Azrael issues written by Denny O’Neil, The Joker shows up alone, bored, and with hair like Eraserhead. It turns out the Joker hasn’t been plotting, he’s made a giant death trap and he’s been waiting and waiting for months for Batman to show! Bored, Joker finally decides to pick up some orphans and see if putting them in danger will attract Batman. To do this he goes into a makeshift orphanage where stranded children are being cared for and the caretaker looks at him suspiciously and says, and I kid you not, “Y-you’re that criminal…that killer…” to which Joker basically says “Nope, I brought candy and stuff, see? Now where are the kiddies?” and SHE TAKES HIM TO THEM. She looked at him, suspected he was the most heinous killer in the world and then less than a minute later agreed to take him to where all the children are. All the tension built up around the Joker is gone after the Azrael stories are told.

Don’t get me wrong, No Man’s Land is very much a must-read for any Batman fan but my God does this thing need to be edited down (much like this review which is going to be over 2,000 words. Easily). I never had the chance to read this series when it was originally published. Instead, I read the novelization by Greg Rucka and although its been years since I flipped through that thing I remember it being a far better and far more focused story. The comics waste too much time trying to please everyone and connect the event to the rest of the DC universe. Acknowledging that there’s an extended DC universe really takes the wind out of the story’s sails. If Superman tries and fails to save Gotham, it’s not a testament to how screwed Gotham is, it just proves that someone isn’t very good at writing Superman. And even if Superman failed there’s an entire Justice League out there that could step in and easily clean up everything wrong with Gotham. The writers of NML try to play the “This is my city. All you other superheroes stay out.” card but I think that if the entire city was starving to death and murdering each other under tons and tons of rubble the Justice League would tell Batman to go f*@% himself. Just ignore the fact that the rest of the DC universe exists and you’ll get a more compelling story. TDKR would’ve sucked if Flash existed and could’ve ran in and checked everyone’s pocket for a detonator. But by occasionally showing Superman come in and screw up here in NML it keeps the Batman fans happy who love to see him outdo the super-folk. The other two kinds of Batman fans are appeased as well throughout the NML run. Volume 1, this book right here, makes the “I’m better than super-powered heroes” Batman fan and the solo-operator Batman crowd very happy, but the fans of a Batman who depends on his extended Bat-family pulling together will have to wait for Robin and Nightwing to show up in volumes 2 and 3. See, in order to get all those other side-kicks out of the way, Batman had to turn into Jerk-Batman and tell everyone to leave. Why? So that eventually he can say “I was wrong and you’re all important to the comic books.” in volume #2, thus making Batman&Friends fans happy. Of course, the solo-fans still have to put up with Azrael in this volume.

Azrael…where do I begin? When the common people have devolved into warring tribes in a crumbling city, seeing a colorful hero jumping off rooftops to beat-up thieves looks very silly. And look at this from my perspective, I just read volumes 1 and 2 of Knightfall in the past month for you guys so psycho Jean-Paul Valley is still fresh in my mind (as was Arnold Wesker being, well, dead!). At this point in DC history they tried to save the character and reinvent him. Author Denny O’Neil is trying way too hard to give Jean Paul a nice balance of light and dark but we already have a guy like that named Dick Grayson. Azrael describes himself as “nerdy”, makes wisecracks, wears a brightly colored suit that exposes his Fabio-like hair (the way the cowl opens looks a lot like the upcoming hero, Talon), and he even drives a Volkswagen beetle (not joking). Batman doesn’t need this many side-kicks and allies in Gotham. It’s lame. Sure, the last Azrael story in the book is entertaining because it has heart but it also has a terrible villain (Lord of the Dance, kills people with knives on his dancing shoes) that makes for a rather unsatisfying end.

As I said before, the Grayson, Gale, and Rucka stuff is the best and that basically makes up the first half of the book. Oddly enough, NML drops in quality in almost the same way Knightfall Vol. 1 did! As soon as there’s a chapter that goes back in time to show us something pre-event involving Two-Face it’s all downhill from there.

The first half of the book is a great read. All of the stuff about Gordon struggling to survive and lead his gang is really fascinating. Seeing average citizens turn on each other or lift one another up to survive is a refreshing break from the norm as well and guess what, some of the people are black! Hard to believe, right? Not enough artists portray people of color in Gotham. It’s something that always bugs me. Gotham should be a more diverse town but it’s all too often shown to be nothing but white folks. Blacks, Asians (not portrayed as ninjas), and Latinos are all a part of this Gotham City and it makes it all feel a lot more real. As for Batman, seeing him handle things on his own (with a little help from Oracle and a new, mysterious Batgirl) is gripping, especially since he can’t rely as heavily on technology in NML. This raises an interesting question: how much advanced tech can Batman use before he stops being Batman? The more tech he has, the less detective work he does and the more super-human he becomes as well. Just look at Snyder’s recent Batman run and the implementation of computerized contact lenses that read out data to Bruce as he sees the world! What about Batman Beyond? How much is too much when it comes to technology and Batman? While you’re thinking about that, let me just say that I think less is usually more when it comes to the Caped Crusader.

The more he gets by on his own know-how and hard work, the more interesting he is as a character. And that is what is at the heart of Batman in this volume of NML, he’s a Batman who has to go back to basics. THAT is what makes it a good read. Yes, the last half of the book meanders and the story loses any drive or sense of purpose so that it can be dragged out as an extra big money-making crossover, but the first half of this book shows a Batman who has to resort to his old detective skills and his urban legend and that’s fantastic. Here is a Batman who has to remind a city why they should be afraid of him. Watching him rebuild his myth is something you won’t soon forget.

No Man’s Land is a bold and exciting premise but it’s not that well executed. This is a great book for anyone who hasn’t read the story before or those who loved the original run of EVERYTHING No Man’s Land related and were disappointed when it was left out of the previous printing. For me, the majority of these tales that took place outside of Detective Comics and Batman were often distracting and made for a bloated story. But in those moments when we’re just seeing Gordon reclaim the city or Batman rebuild his legend and re-establish fear, the book is truly compelling.
Posted by John "Zanziber" Rogers at 6:00 AM
Email ThisBlogThis!Share to TwitterShare to FacebookShare to Pinterest
Labels: Reviews