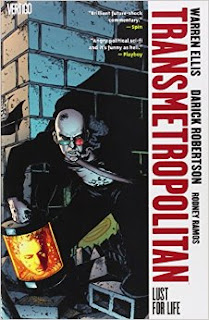 In this second volume of the Transmetropolitan series we see Spider Jerusalem regaining his stride as a columnist writing about life in his city of the future. The first few chapters follow him through some of his research, explaining the Transmetropolitan universe as we go. The last three cover an extended storyline that is a little more action and a little less journalism.

After the constant flow of the first book, the disjointed first section of this volume feels a little stilted. A common thread is used throughout this set of short stories to try and bind them together, but it still feels like filler material in comparison to the previous volume. We felt far more at home with the second section, where Jerusalem runs into a bit of trouble. More time is taken to develop both the plot and a selection of intriguing antagonists.

Robertson's artwork continues the quality trend he set in the first book, though there's less opportunity for his superb bustling cityscapes and a little more of the inside of Jerusalem's apartment. With the second half of the book though, he's allowed a little more leash and his work is a treat.

This isn't the revolution that the first book was, but is a collection of monthly comics gaining momentum. It remains far superior to the vast majority of work you'll see in this medium and is certainly valid of collecting in this form. However, the concept of a difficult second album can sometimes refer to comics as well as music, and it's only towards the end of this collection that I felt the pace was picked back up again. Still, the last three chapters are more than worth buying the rest of the book for.
Posted by John "Zanziber" Rogers at 6:00 AM No comments:
Email ThisBlogThis!Share to TwitterShare to FacebookShare to Pinterest
Labels: Reviews 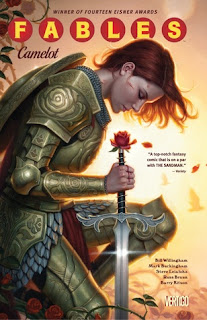 With Fables closing in on its 150th and final issue, creator Bill Willingham has been slowly moving toward what looks to be an epic, and potentially disastrous conclusion to Vertigo's long-running series.

Fortunately, Willingham is aware that before you lay waste to a fictional universe, it's helpful to give your audience a breather of sorts. And so it is with Camelot, the penultimate storyline now collected in the 20th Fables trade paperback. Mainly serving to move critical pieces into position for the finale, readers are thankfully spared the bloodbath that has steadily removed beloved characters from the series like an outbreak of Spanish flu. Instead, the story focuses on the relationship that has arguably defined Fables from the very beginning: the Cain and Abel-style conflict between Snow White and her sister, Rose Red.

But the absence of devastating character deaths or a specific disaster by no means makes Camelot a filler episode. Big, challenging ideas are chewed over, among them redemption, whether or not one can fight fate, the nature of evil, the idea of just what 'home' actually means. But perhaps most important of all is one that in some ways is a radical departure from the series' manichean struggle between good and evil: the idea that two people on opposite sides of a conflict can both be right.

Opening in the aftermath of Snow White's victorious duel with Prince Brandish (who had just murdered Bigby Wolf), Camelot primarily follows Rose Red, now finally beginning to fulfill her destiny as a servant of the anthropomorphic spirit of Hope. Having spent the previous two storylines dithering, Rose Red has at last decided that she'll be the embodiment of the hope of redemption, and to that end, she sets about establishing a new order of knighthood. This new round table (and yes, the connection to King Arthur is explicit) is intended to champion the cause of second chances, and thus will be comprised of knights who themselves are in desperate need of their own.

Unfortunately, a serious and perhaps intractable conflict with Snow is provoked when Rose decides to make Brandish, (who survived his duel thanks to what amounts to the Fables equivalent of a horcrux), her personal redemption project. Taking him under her wing for what she describes as a crash course in how to be a decent person, Rose is told by an outraged Snow that if she doesn't relent and allow Snow to finish off Brandish once and for all, their relationship - which has been slowly and steadily improving throughout the series - is done. But Rose, who has come a long way from the selfish and self-serving wastrel she once was, is now devoted to principle, and a cause she believes in. Her decision severs the two with apparent finality, and sets in motion Fables's endgame.
Posted by John "Zanziber" Rogers at 6:00 AM No comments:
Email ThisBlogThis!Share to TwitterShare to FacebookShare to Pinterest
Labels: Reviews 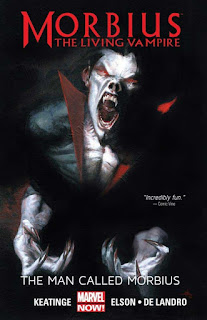 One thing that struck me very much about this – not being a dedicated Marvel fan – was that by the end of volume #1 of the Living vampire series Morbius had, in his own words, died twice – perhaps he was just injured (to a degree where a normal person would be dead) but he mentions being a dead man and a dead vampire – so surely he should have become Morbius the undead vampire? No... I'm probably spoiling the concept of the character to even suggest it.

Rather than that we have Michael Morbius, sufferer from a rare blood disease who, whilst trying to cure himself, manages to transform himself into a living vampire. He has few of the disadvantages other than a sensitivity to sunlight (though he doesn’t burn up) and the bloodlust.

What’s rather nice about the series is that, despite the superhero universe, Morbius is no hero – and when he tries to do good he tends to make things worse. Part of me missed the early Vampire Tales stories where Morbius was faced with a demon cult and there was a definitive supernatural element. However by moving the story into the mundane, and by eschewing an “end of the world” story for something much more small town focused and actually corporate at heart, the writers managed to change focus and make the story more interesting for that.

Spider-man does make an appearance during the full story, as do some of the more famous super-villains in the escape from the Rift Spider-Man volume, and the Legion of Monsters cameo towards the end.

The artwork worked for me more through the Morbius comics than the Spider-man comic – but that was personal preference more than anything. The vaunted AR (where you can get extras on your phone by aiming an app at certain pages) never seemed to work for me however.
Posted by John "Zanziber" Rogers at 6:00 AM No comments:
Email ThisBlogThis!Share to TwitterShare to FacebookShare to Pinterest
Labels: Reviews

The Walking Dead Volume 21: All Out War Part Two 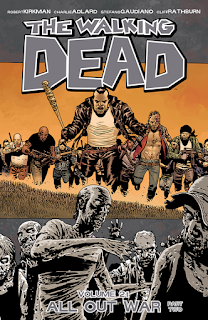 Title: The Walking Dead Volume 21: All Out War Part Two

(I realized that I missed this after I had already wrote my review for volume 22.)

“All Out War (Part Two)” is the harrowing ending to the long, bloody war between Rick and his civilization and Negan and his Saviors. Going into “All Out War”, I expected something similar to the conflict with the Governor many, many issues ago. In the end, however, Kirkman and company threw a pretty big curveball.

All Out War wasn’t necessarily about the brutality and the conflict between these two forces. It was more about re-establishing the universe that The Walking Dead exists in and giving the characters hope of living in a habitable world. It’s something Rick has been espousing for a while in these later issues. With the conflict’s conclusion, it seems like a distinct possibility.

There are some clever strategies used by both sides in this collection that makes for suspenseful and entertaining reading. However, some of the character arcs don’t really lead anywhere. The whole war, at times, feels like it’s bridging the gap between this man vs man world to the supposed new world order of man vs undead that the series seems to be heading toward. I’m not necessarily complaining. I’m all for taking the series in new, interesting directions and I approve of doing that with a 12-issue long war. I would have preferred some tighter character arcs and improved storytelling. However, if I’m wishing for those things 126 issues in, I’m heading for disappointment.

“All Out War (Part Two)” held my interest very well and provided a lot of appetizing action and general entertainment. Some of the character arcs didn’t lead where I wanted them to lead (or anywhere, for that matter) but the series is heading toward a nice change of pace that may well be welcomed. This trade is a must for any Walking Dead fan.
Posted by John "Zanziber" Rogers at 6:00 AM No comments:
Email ThisBlogThis!Share to TwitterShare to FacebookShare to Pinterest
Labels: Reviews

East of West Vol. 1: The Promise 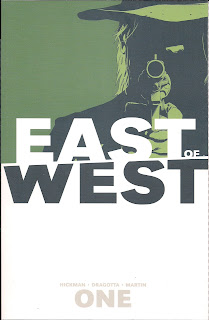 I’ve had my eye on East of West for quite some time now and finally got a chance to read the first volume, which collects issues #1-5. Like the Hugo-award winning comic, Saga, East of West is an edgy science fantasy story. Loosely inspired by the Book of Revelation, it depicts the Four Horsemen of the Apocalypse who have reincarnated on Earth shortly after a new prophecy is given. Three of the Horsemen roam the countryside to fulfill the prophecy, but one renegade Horsemen — known simply as Death — is on a mission of his own.Traveling from city to city on a robotic horse, Death uses all means possible to find his wife and accomplish his goals.  Unfortunately, he’s probably humanity’s best shot at survival.

Weird westerns are almost a genre onto themselves and this series is as much of one as it is space fantasy. Following a meteor strike, borders are divided among the seven nations of America. We have characters that are vested in bringing about the apocalypse and others that have amassed large armies to defeat the horsemen and take over the world. The vast world takes a lot of time to develop and after five issues, I like the feel of where this is going, but there was minimal character development.

Unlike Saga, East of West has a serious and dark tone. Violence is abundant and the humor is sparse. But I love the general weirdness that slips into the comic, such as the strange talking eye that the barkeep must keep locked up in his metallic eye patch.

I will most definitely continue to read this comic to see where it is going. It is fast-paced and intriguing. The artwork is cleverly drawn and brings the SF-style western to life. As a fan of both original-content comics and science fiction, this comic is right up my alley. I’m hoping that we get a little more character and plot development in subsequent volumes, but I don’t feel it is premature to recommend that people give this a shot.
Posted by John "Zanziber" Rogers at 6:00 AM No comments:
Email ThisBlogThis!Share to TwitterShare to FacebookShare to Pinterest
Labels: Reviews
Newer Posts Older Posts Home
Subscribe to: Posts (Atom)