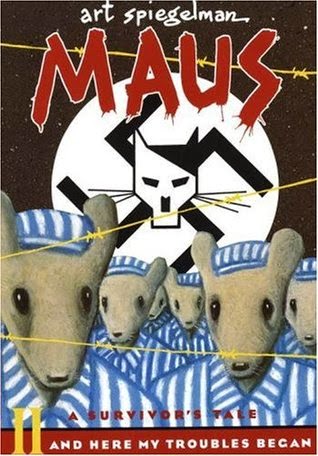 It sounds like a sick joke: a cartoon history of the Holocaust in which the Jews are mice, the Nazis cats, the Poles pigs, and so forth. And it would indeed be grotesque if Art Spiegelman didn’t draw the life of his father, Vladek, with such defiant grace. The anthropomorphic animals are there for a reason, as Spiegelman is the first to admit: They give the artist and his readers the distance necessary to absorb horrors almost beyond imagining.

Those new to what has become Spiegelman’s life work should go back to the first volume of Maus (1986), which contains chapters originally released in the new-wave comic Raw. The earlier book follows Vladek through his early years in Poland — his romances and marriage, the gathering Nazi threat, his imprisonment in labor camps — leaving us on the doorstep of Auschwitz as if to pause for breath. Maus II drags us inside, but while parts of the book are exceedingly grim, this is no parade of atrocities. Instead, it’s an astonishingly rich portrait of survival through wit and luck.

One of Spiegelman’s finer points is that, in a sense, his father didn’t survive — at least not as the clever, urbane Vladek we meet in the first book. Framing the Auschwitz segments in Maus II are scenes set in modern-day New York, in which Art cajoles his ailing father (he died in 1982) into recording his memories. Here, Vladek is a bitter and needy old man, a neurotic hoarder who may have driven his wife, Art’s mother, to suicide. It’s not a flattering picture, nor is the artist’s portrait of himself as a rebellious son torn between coming to terms with his father and keeping him at arm’s length.

But Maus is not about rounding off the edges of the past. It’s an attempt to understand a man and his place in history through small, evocative drawings. Spiegelman’s mice are no Disney concoctions — their blocky solemnity defies cuteness. They’re intentional abstractions, meant to put off pathos until we can take in the details of what happened. Then, and only then, are we allowed to get closer. At the very end of this brilliant memoir, Spiegelman prints a photo of his father in 1945 — and with one devastatingly simple step leads us back into the world of man.
Posted by John "Zanziber" Rogers at 6:00 AM
Email ThisBlogThis!Share to TwitterShare to FacebookShare to Pinterest
Labels: Reviews