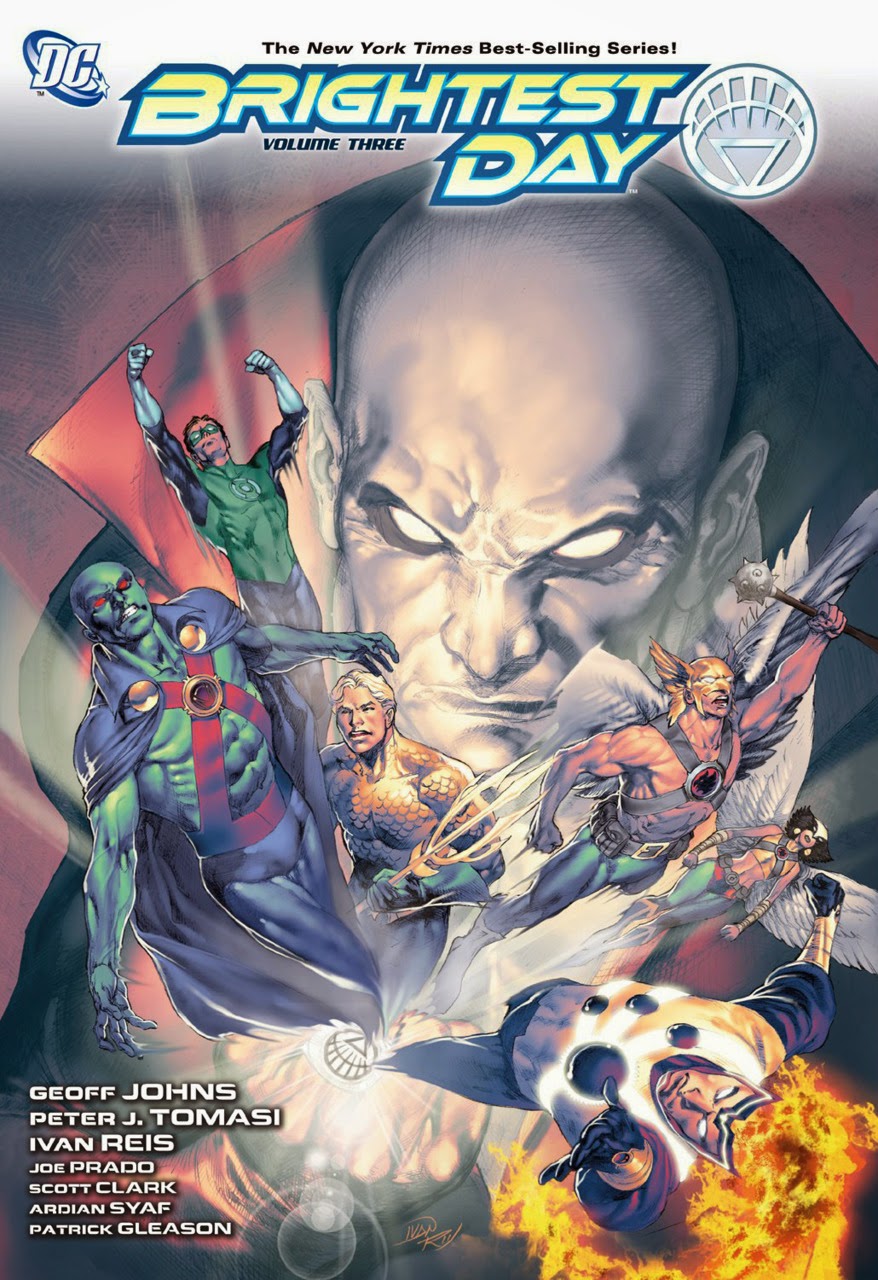 By the second chapter of Brightest Day Vol. 3, Deadman Boston Brand has already been usurped by the White Lantern and forced to seemingly kill his fellow heroes. Hawkman and Hawkgirl fall first, then Aquaman two issues later, the Martian Manhunter an issue after that, and Firestorm enters the mix right after. That is, in the concluding book, Brightest Day sets up its pins and knocks them down with alarming swiftness. If the earlier volumes seemed to plod along, to their detriment, but also give a good mix of stories to their benefit, the third volume's focus is more singular, and it's the most cohesive of all three books.

The Lantern states outright that its interest is not in the characters' conflicts -- the Aquawar, Firestorm vs. the villain Deathstorm, and so on -- but rather in the characters' emotional growth; as each character has an epiphany, the Lantern whisks them away. This unfolds in deus ex machinas, like the Lantern rescuing Firestorm Jason Rusch's father from the Deathstorm in the span of a word balloon, when Rusch and co-Firestorm Ronnie Raymond had spent the better part of a couple issues attempting the rescue themselves. The Lantern may not be invested in the story, per se, but the reader is, and these quick conclusions are disappointingly brusque.

Writers Geoff Johns and Peter Tomasi have explored life in all its contradictions in Brightest Day and we're meant to understand here that life is neither convenient nor fair -- as when Hawkman loses Hawkgirl and Dove loses Deadman, all for the purposes of the White Lantern -- but the reader might have cause to feel cheated. That the Deathstorm conflict and Martian Manhunter's fight with D'kay, among others, ultimately count for naught in the book's climax makes one wonder if Brightest Day couldn't have been shorter, or else what was the purpose of a number of storylines that simply fall by the wayside.

There are, of course, new DC Comics series now starring almost every character featured in Brightest Day. Whether Aquaman and Hawkman's stories follow directly from the events of Brightest Day remains to be seen, but we know that Firestorm's does not (explicitly, at least), and long-time Firestorm fans must be disappointed by the character's decades-long saga ending on a cliffhanger (or a strange Flashpoint reference, I'm not sure which). Brightest Day acts like it's another cog in the wheel; in the same way Blackest Night lead to Brightest Day and Sinestro Corps War lead to Blackest Night, so too does Brightest Day suggest more to come. Given that there's not more to come, at least for some iterations of these characters, I might have preferred more conclusion.

It's entirely possible I might be more over the moon about the end of Brightest Day if I hadn't already known about the appearances of Swamp Thing and John Constantine, or if I didn't know both characters now have DC Relaunch titles of their own. No doubt Swamp Thing's appearance in Brightest Day #23 was a breath-taking moment, and Constantine on the last page of the book equally shocking. Unfortunately, when you know what's coming, there's flash here but not much substance. The last page of Blackest Night featured the White Lantern, an ominous, mysterious image; a splash page of Constantine cursing is not really so exciting, when you're already over the excitement of Constantine's return, as Constantine actually doing something might be. (Jim Shooter's got it right that this is a tease, not a cliffhanger.)

Two related points: First, it would be a fallacy to say that all comics work the same in periodical and collected form; rather, some stories lend themselves to one and some to the other. The third volume of Brightest Day's single- or two-issue stories and its successive conclusions (of sorts) was probably much more satisfying in single issue form, where Aquaman's "Aquawar" unfolded over a month rather than sandwiched between the Hawkman and Manhunter wrap-ups. There's some business going around now about how spoilers enhance enjoyment of a story, but I'm skeptical of that -- I venture I'd be much more enthused about the end of Brightest Day if I hadn't known what was coming, and perhaps even didn't know that Swamp Thing and Constantine would each be appearing in loosely-related series following after. In this case, I think the Brightest Day series held more impact for the reader in original form than as a collection after the fact.

Second, despite knowing what was coming, I've been considering why Swamp Thing and John Constantine's appearances still caused me so such glee, when I've only had limited exposure to each. I'm a late-blooming fan of DC's supernatural characters -- Sandman, yes, but I wasn't much for Fate or Primal Force, not until Bill Willingham's Day of Vengeance and his Shadowpact series. Shadowpact, for the first time, made DC's magic fare accessible to me, perhaps largely because Willingham used Blue Devil and the lovable Detective Chimp and more traditional-type villains. Constantine and Swamp Thing, by inference only, seem more accessible supernatural characters of this type, grounded in Earthly horror and not Atlantean wizardry. That they are formerly of Vertigo also helps; Vertigo has a modernity that DC heroes have often lacked, and to bring that spirit into DC is something I soundly applaud. I can't attest to being a fan of these characters, but I'm glad they're here, story spoilers notwithstanding.

The third volume of Brightest Day is ultimately a sound read, and I did enjoy the characters' victories and feel sad at the tragedies within. It serves effectively as "Rebirth"-type story for the main characters, streamlining and defining especially Firestorm and Aquaman (the stand-out star of this series). These successes, however, only leaves the reader wanting more, and that's where the book fails. Brightest Day ends with the tag "The Beginning," when in fact this is really more of the end, and I'd have liked to see more acknowledgment of that in these pages.
Posted by John "Zanziber" Rogers at 6:00 AM
Email ThisBlogThis!Share to TwitterShare to FacebookShare to Pinterest
Labels: Reviews