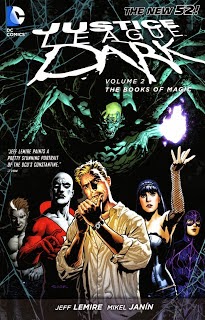 Second acts are tough, especially in the DC Comics New 52. Neither the second volumes of Green Arrow nor Red Lanterns improved over their first. Superman Vol. 2's creative team left with the end of that collection. So it is with great pleasure, though not much surprise, that I found Jeff Lemire's Justice League Dark Vol. 2: Books of Magic is a significant improvement over Peter Milligan's first trade, and one that clearly demonstrates how Justice League Dark can continue successfully into the future.

Lemire delivers a consistently excellent product on the horror comic Animal Man, so it's no shock that his supernatural-themed Justice League Dark should also be good. But what Lemire does early on that helps the book immeasurably is to pull it somewhat out of that "magic" realm. Whereas Milligan's book opened with the Justice League outclassed against a magical force, Lemire takes the supernatural Dark team and depicts them in a rather "regular" superhero mission, matching wits with long-time Justice League villain Felix Faust.

The biggest impediment to these supernatural team titles is that in depicting magic they tend toward the flowery, and instead Lemire makes the title immediately more accessible and familiar. There's even an unusual aspect of espionage action to this supernatural book; ARGUS's Steve Trevor recruits John Constantine to head a kind of "black ops" group of mystics, and a key sequence in the book takes place wholly within one of ARGUS's secret bases.

Second, not to be overlooked, Lemire benefits Dark by making it "cool." We saw a ragtag team in Justice League Dark Vol. 1, essentially lead by Madame Xanadu and with less well-known characters like Shade, the Changing Man and Mindwarp. Lemire wisely puts Constantine in the lead (after all, who's cooler than John Constantine?) and benches Xanadu for most of the issue, spotlighting instead more recognizable characters like Zatanna and Deadman. New member Black Orchid also isn't as well known, but Lemire and artist Mikel Janin fit her naturally with the team on a number of levels -- Orchid is visually interesting and more traditionally superheroic-looking than Shade, for instance; she stands in for the reader as the "skeptic," someone not as versed in magic as the rest of the team; but additionally, as we learn by the end of the book, magic is not so foreign to Black Orchid as she may pretend.

All of this serves to sweep the reader from a fight with Faust to the team's new headquarters, the House of Mystery, and then to a magic-fueled battle inside ARGUS's Black Room. Books like Dark, Shadowpact, Primal Force, the "Sentinels of Magic" stories and others have suffered in my opinion from being too esoteric and fantasy-driven in their magic superheroes; what Lemire presents here is a book that a fan of Justice League or Justice League of America could pick up, as well as fans of these magic characters, and and not be put off by too many pages spent on flowery incantations.

I also appreciated that even as Lemire's story is a break from Milligan's that came before, Lemire preserves what happened in the last volume and moreover, it matters. Constantine and company gained Steve Trevor's attention because of their earlier fight against Enchantress; moreover, Xanadu is still having the same apocalyptic visions that she had in Milligan's story, and Lemire further co-opts these as the doings of the story's villain. One can pick up this second volume without having to read the first, but I appreciated that the first still counts and that Lemire keeps the characters basically the same as they were before (something less true between the Dan Jurgens and Ann Nocenti Green Arrow books, for instance). It helps immeasurably that DC kept Janin on this title; I'm glad they didn't sweep the entire original team out, but kept Janin, whose pseudo-realistic style is just right for this title.

I worried in reading the first volume of Dark that John Constantine, newly released back to the DC Universe, came off toothless; he cracked wise and smoked a bunch of cigarettes, but wasn't in all the legendary bastard I'd been lead to expect. Lemire solves this too, whether it's Constantine telling Zatanna a pretty compelling lie in the beginning to gain her help, or Constantine snapping young Timothy Hunter's neck in the end (a ruse but entirely believable). I only paused a bit at Lemire's suggestion that Constantine truly (rather than just another of his cons) has feelings for Zatanna; obviously this doesn't keep him from using her to his own ends, but I felt it was perhaps a bit out of character for Constantine to "love" someone, and especially so early in this series.

Justice League Dark Vol. 2: Books of Magic ends on a cliffhanger, and just as one of my favorites, Frankenstein, joins the team, too. No question Jeff Lemire has won me back for a third volume, and it's this volume, more than Justice League, that has me excited for Trinity War, too. I don't know how this title will change when J. M. Dematteis comes on, but I'm eager for what Lemire does in the meantime.
Posted by John "Zanziber" Rogers at 6:00 AM
Email ThisBlogThis!Share to TwitterShare to FacebookShare to Pinterest
Labels: Reviews