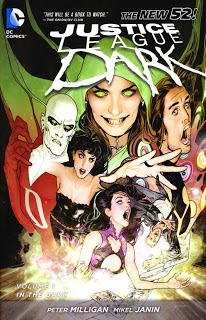 In DC Comics's announcement of the New 52 initiative, Justice League Dark emerged as one of the most compelling reasons for the reboot -- a title that would spearhead the reintegration of many of DC's classic supernatural characters from the Vertigo imprint into the DC Universe proper. No less, the book would be written by Peter Milligan, a long-time Vertigo writer with celebrated runs on Shade, the Changing Man and John Constantine's Hellblazer, both characters Milligan would write again in Dark.

The joy of a comic that includes Superman, Batman, Wonder Woman, Cyborg, and then also Constantine, Shade, Zatanna, and Deadman, among others, remains. And Justice League Dark: In the Dark's final cliffhanger and the fact that DC superstar writer Jeff Lemire comes on as writer in the next volume both warrant checking out this series' second collection. But Milligan's first arc on Dark is overlong and fails to effectively use the Dark characters, ending up more like "just another" team book than the site of Vertigo horror in the DC Universe.

In terms of where to find "the Vertigo" in Justice League Dark, Milligan brings it forth most clearly in the characters of Deadman and Shade. The each have a troubling relationship with the women in their lives, as Deadman tries to entice girlfriend Dove to have sex with a random man while Deadman possesses his body, and Shade has created his companion from the ether without telling her she's not "real." That the only way the book can show a character to be disturbed is to have them victimize a woman is problematic, but the result is that Milligan gives more depth to Deadman and Shade than the other characters in the book.

That Milligan even addresses Deadman's sexuality falls squarely on the Vertigo side of things. Milligan's conclusion that Deadman must essentially violate a person in order to be intimate is only logical, most likely the reason no other writer has approached it until now; to Milligan's credit, what he's done is to take an obvious but unseemly aspect of Deadman and bring it to light, thereby building on the character in a faithful way.

Later, Milligan mitigates it all by suggesting the Enchantress's dark magic spurred Deadman to sleaziness, though the character might be all the more interesting if left his own flaws. Either way, Deadman is a good example of how Milligan tries to present the darker side of DC Comics's dark characters here.

The rest of the characters receive far less spotlight. Milligan would seem to bank on John Constantine's reputation to make his impression in the book, since fabled louse Constantine does nothing untoward nor really terribly controversial in these pages. It becomes almost a running joke that the Justice League-level sorceress Zatanna's spells fail in this story, rendering her nearly useless. And Milligan brings back new character Mindwarp from Flashpoint: Secret Seven, though Mindwarp's role in the book is fairly minor.

Indeed, In the Dark's greatest problem is that the first five-issue arc consists almost entirely of the characters moving from place to place, maybe bantering, maybe fighting something, before they move again and repeat. The story's antagonist is apparent almost from the beginning, and so there's little suspense as the various characters are introduced and argue with one another, until enough issues go by that Milligan brings it all to a close.

That close, even, peters out -- for all the running around and worrying that the Dark characters do, ultimately Constantine speaks one spell by himself that ends the Enchantress's mad rampage. Similarly in the sixth issue epilogue, Deadman possesses Shade and suddenly Shade's wild golem disappears. That Milligan's focus is more on the characters than on the action isn't a detraction, but neither side has quite enough heft here.

Part of In the Dark's rooting around might be attributable to the fact that the final issue leads in to a four-part crossover with Joshua Fialkov's I, Vampire in the next volume. If Justice League Dark did have to mark time so Vampire could get in place alongside it, Dark was the worse for it. The main plot of In the Dark could certainly have been two or three issues instead, and then perhaps that extra space might have been used to convince the reader how the DC Universe's new Constantine and new Zatanna stand up to their old iterations.

Again, however, there's a simple joy in reading about a team that includes Constantine and Zatanna and Shade, and the fact that Jeff Lemire -- who wrote perhaps the best DC New 52 debut so far with Animal Man -- is taking over only portends good things for the book. Artist Mikel Janin does fine work throughout with a detailed, almost photo-realistic approach to the book's various decaying ghouls, and it's good news he's sticking around, too. Justice League Dark: In the Dark is not a strong debut for this much anticipated series, but there's evidence better things may be in store the next time around.