Deadpool Vol. 5: The Wedding of Deadpool 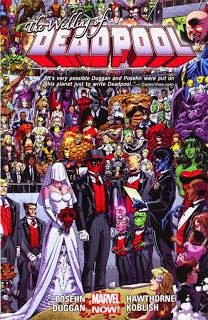 This is a weird trade -- not because of what’s in Deadpool Vol. 5: The Wedding of Deadpool, but rather in how it’s assembled. It collects issues the first Annual along with issues #26-28 ... but the Annual is also included in a later trade, this particular book starts with #27 and ends with #26, and the Annual came out before any of the issues published here. Since they’re in the book out of order, I’ll talk about them out of order.

The Annual was the first work for Marvel by Ben Acker and Ben Blacker of Thrilling Adventure Hour fame, and it simultaneously brings back a character while explaining away a format change. The previous volume of Deadpool by Daniel Way featured a second set of captions to go along with the traditional yellow boxes. The white boxes weren’t as funny, took up too much room on the page and often interrupted the story’s flow. Acker and Blacker reveal that this is because during an adventure, Deadpool and fellow immortal vigilante Madcap died and fused together; the white boxes were Madcap’s thoughts. This actually makes re-reading Way’s Deadpool a lot more worthwhile; it’s also reminiscent of Deadpool bodily merging with Cable in the Cable and Deadpool book.

Marvel built up Deadpool’s wedding as a big second-quarter event, introducing his new wife-to-be in the online-first Deadpool: Dracula’s Gauntlet. The opening of issue #27 provides the basics for the reader: her name is Shiklah and she’s a demon queen who can turn into a gorgeous human form. Wade saved her from becoming Dracula’s new wife. She’s not the most captivating of characters, but she has a strong identity and purpose apart from her husband and has an excuse to be elsewhere when Deadpool is on adventures. They even have similar problems with being pursued by enemies; she’s dodging vampires while Deadpool’s fending off attacks from ULTIMATUM. After an action-packed first part, the story transitions into some wedding hijinks as Deadpool forgot to get a minister.

Despite considering getting the Purifiers to run his wedding, Deadpool ends up being approached by Nightcrawler in one of his first appearances in another title since his resurrection. This allows Gerry Duggan and Brian Posehn to bring back the North Korean X-Men subplot and set up a meeting between Kurt and his Korean counterpart. In issue #28, this becomes the main plot of Deadpool and Shiklah’s honeymoon trip to Asia. The writers’ ability to weave their subplots together is really impressive; they’re not afraid to make callbacks to issues published years before. While the record-breaking cover doesn’t quite represent the wedding in the book, it’s still attended by the Avengers, the X-Men, and other major heroes. It’s a sign that they do appreciate Deadpool no matter how much he annoys them. There are some great cameos too, with the aforementioned Madcap, Big Bertha of the Great Lakes Avengers, and Bob, Agent of HYDRA all showing up. Blind Al is also seen ... although she doesn’t quite make it to the wedding. Weasel may be in one of the crowd scenes but I can’t be certain.

This is just the beginning of the nostalgia rush, as the rest of issue #27 is made up of ten stories by every writer of a Deadpool solo book. Duggan’s story bookends the conceit behind the stories: they’re all the other times Deadpool has had a wedding. All of them are false or exaggerated but they’re still fun. Posehn teams up with Scott Koblish to do an inventory short with Deadpool marrying Carol Danvers in Vegas in the '80s. Fabian Nicieza gets two stories, with one how Wade learned to love chimichangas and the other as part of the Cable and Deadpool run. (Rob Liefeld’s influence on Deadpool goes unacknowledged apart from the credits and it doesn’t affect the book at all.)

Mark Waid, who wrote the very first Deadpool mini-series, regales us with a fourth-wall-breaking tale which might also explain Wade’s comics awareness. Joe Kelly’s story is the best of the lot with a great use of captions and a heartbreaking ending. Christopher Priest teams with Niko Henrichon of Pride of Baghdad to tell another beautifully-drawn downer. Jimmy Palmiotti’s story is hectic like the rest of his run while Frank Tieri concentrates more on Deadpool’s time as part of Weapon X.

Gail Simone returns to the Agent X era to regale us with Wade’s wedding to Outlaw as well as the resolution of the shrunken Rhino plotline from that book. The last two, by Victor Gischler and Daniel Way, illustrate the weaknesses of their run: Gischler’s Savage Land story is overly salacious and Way’s is just goofy and awkward. Three of the stories involve Copycat, Deadpool’s first love interest, who it appears has returned to life and will hopefully return to the main book. The Wedding of Deadpool also includes a guide to identify the 236(!) individual characters on the cover.

Between the honeymoon and the Annual is issue #26, the best inventory issue. It sends Deadpool back to the '60s to save Nick Fury from a time-travelling Hitler. Cable gets involved and things don’t end well for the dictator. This is actually a prequel to issue #20 but ends up being much better. Cable is rarely used in the current run, so whenever Duggan, Posehn, and Koblish bring him out, hilarity always ensues.
Posted by John "Zanziber" Rogers at 6:00 AM
Email ThisBlogThis!Share to TwitterShare to FacebookShare to Pinterest
Labels: Reviews