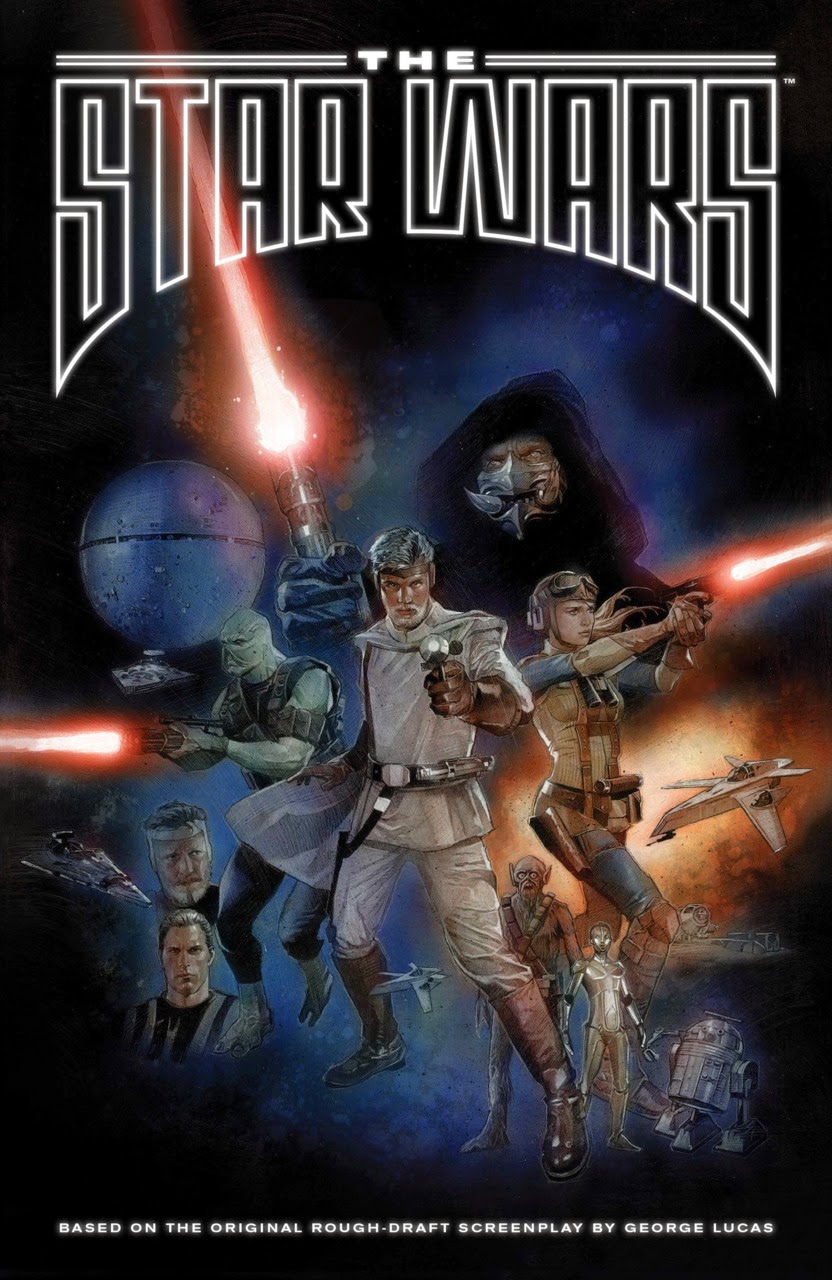 The Star Wars is a weird comic. I don’t necessarily mean that in a bad way, although the book has its far share of issues. I more mean that, as someone who’s seen the Star Wars movies an unhealthy number of times and has in the past been steeped in the Star Wars lore in and out of the movies themselves it’s very different.

The Star Wars is an adaptation of George Lucas’s first draft screenplay for what would, eventually become Star Wars the film. Interestingly, there are a handful of elements in the book that would also pop up in The Empire Strikes Back and Return of the Jedi as well, and there are even one or two visual designs that seem like they would be at home in the prequel trilogy, though whether those are just nods by the creative team that adapted the book or actual parts of the original script, I don’t know.

This being a weird version of Star Wars aside, how does The Star Wars work as a comic? It’s a mixed bag. The script by JW Rinzler is fine for the most part, but there’s a lot of stiff or clunky dialogue. Some of that dialogue feels right at home in the kind of pulpy, fantasy story that is being told, and really, more even than the movies, The Star Wars is fantasy, not sci-fi, through and through. It just happens to take place in space. That said, there were other times when the dialogue was inexcusably poor. When characters yell “for freedom!” it always comes off as goofy instead of quaint.

The story itself also has some issues, mostly in the last act. The book ends similarly to the movie in that the Death Star (although it isn’t given that name in the comic) is destroyed by a group of rebel starfighters, but Princess Leia and Jedi Annikin Starkiller, still on board the “space fortress,” make a harrowing escape during its destruction that doesn’t pay off. There’s also a Sith named Valorum (bonus points if you recognize the name) that switches sides and helps Annikin and Leia escape because the Imperials don’t fight with honor… or something. Another Sith had no problem showing up at the beginning of the story and killing Annikin’s kid brother, so Valorum’s change of heart doesn’t really make any sense.

And after the Death Star, or space fortress I guess, is destroyed, there’s literally a one page version of the “everyone gets medals!” scene at the end of Star Wars the movie and some wrap up text. And that’s it. It adds up to an ending that feels messy and unsatisfying. I don’t know how much of the blame for that falls at Rinzler’s feet or if it’s due to the original script, but a good adaptation should know how to work around that kind of stuff.

That isn’t to say that the book is all bad, however. The art provided by Mike Mayhew with colors by Rain Beredo is consistently great. It strikes a beautiful balance between a pencilled and painted look that actually reminded me a bit of Adam Hughes; a giant complement if you’re unfamiliar with his work. As a result, even when the story goes off the rails, the visuals keep you hooked. The art team also did a great job of balancing the familiar look of the movies with some of original concept designs and new visuals unique to this comic.

The Star Wars isn’t very successful on its own. The dialogue is borderline bad at times and the story almost completely falls apart at the end. Even the fantastic job the art team did on this book can’t entirely redeem it. However, The Star Wars is a must have for fans of Star Wars in general. It’s a really fascinating look at what could have been, even if in some cases you’re glad it ended up being pretty different.
Posted by John "Zanziber" Rogers at 7:39 AM
Email ThisBlogThis!Share to TwitterShare to FacebookShare to Pinterest
Labels: Reviews