Glory Volume 1: The Once and Future Destroyer 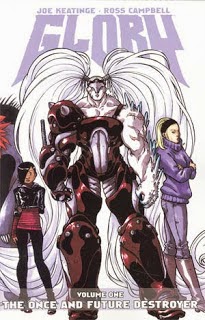 Title: Glory Volume 1: The Once and Future Destroyer

Despite the many flaws of Rob Liefeld’s work, he can at least take solace in the fact that his concepts have been turned into modern classics by more talented creators. Alan Moore used Supreme for a post-modern take on Superman, while more recently, Brandon Graham and a host of artists have transformed Prophet into a unique space epic. Joe Keatinge and Ross Campbell’s Glory, Vol. 1: The Once and Future Destroyer, another of the recent “Liefeld revivals,” provides a clever take on the concept of a warrior woman.

From the cover, you can immediately tell that the modern version of Glory is not a conventional heroine. Back when she was created, Glory was basically just a Wonder Woman copy in both her looks (white hair aside) and her origins (with the “twist” of being half-demon and half-Amazonian). She wore a skimpy red outfit and was often drawn in provocative poses. The new Glory is over eight feet of muscle with only the barest hints of curves. Her new outfit is essentially a red pair of overalls. Her hair, while still stark white, is now in a pair of long ponytails, giving her a surprisingly girlish look. Compared to other highly muscular superheroines, like She-Hulk and Power Girl, Glory is highly unique.

Glory’s new look is now more consistent with her new personality. Keatinge has altered her backstory, changing her parentage from mystical to alien. Normally, I would be against such a radical revamping of a character, but Glory was such a paper cut-out of a character in the first place that there was really nothing to lose. The new origin allows Glory to differentiate herself from Wonder Woman, and it also gives Campbell an opportunity to draw unique character designs, such as Glory’s “ugly cute” assistant Henry and various horrific monsters. However, Glory’s past adventures still happened, leaving her as one of the few World War II-era superheroes of the Image universe. This was a wise move, as it allows her interactions with Supreme to remain canon.

In the wider scheme of the book, Glory isn’t the central character. That role falls to Riley Barnes, a journalist and Glory super-fan investigating what happened to her disappeared idol. She is linked to Glory by mysterious dreams and a destiny that unfolds in a shocking fast-forward look into the future. (I was hoping that this was the same future in which Prophet takes place, but unfortunately, the dates don’t seem to match up.) It takes a little time to warm up to Riley, who starts out as a simple audience surrogate but who eventually becomes a key ally. It’s a welcome transformation to see Riley become an effective supporting character, even if she isn’t quite ready to become a battle-hardened warrior.

There’s another major human in Glory’s orbit: Gloria West, with whom Glory once shared a body during Alan Moore’s very brief run with the character. Exactly what happened to split them up has yet to be revealed, but Gloria serves as a mother figure to both Riley and Glory. She too joins the fight later on, a trait that really endeared her to me. It’s clear from the beginning that something terrible has happened to Glory, who is fighting the evil influences in her genetics. A few key flashbacks show that quite a bit of Glory’s “Image edginess” and anger issues can be traced back to her evil father, Silverfall. All the same, we get a revelation about Silverfall and his motives that makes it unclear whether his aim to abduct Glory is an evil plot or just the actions of a caring father.

Even with all of Keatinge’s changes to Glory’s character, it’s Campbell who really makes the book shine. There’s no cheesecake art or lustful, spine-shattering “boobs and butt” poses -- a nearly impossible feat for a book where the three leads are all female. Even Birds of Prey and Captain Marvel can’t avoid some "fan service," but the characters of Glory have been designed to be almost aggressively “anti-fan-service.” Campbell does have a bit of a problem with drawing Riley cross-eyed, and this, along with a bit too yellow of a color palette,  makes her look like an Asian caricature at some points, but it’s a flaw that gets worked out as the story goes on.

There’s quite a bit of gore, and while Invincible has desensitized me to Image’s love of blood and guts, there are a few scenes that actually use violence effectively. This is especially true with the flashbacks to Glory’s time with Supreme and the flash-forwards to a dark future. It helps that we’re following Riley, who is as shocked as the audience is at all of the violence going on around her.

Keatinge and Campbell’s book is part of a broader trend of Image’s newer books to have stronger writing and better art. It’s an impressive change for a company which many (myself included) once derided for the quality of its work. They still have to improve their ability to meet deadlines, but Glory doesn’t fall prey to that issue.

For only ten dollars, you get six issues in Glory: The Once and Future Destroyer, making it almost a must-buy in a world where $25 Marvel hardcovers contain only five issues. Despite the association with Liefeld, the Glory contained within is almost entirely a new character, keeping only the good parts of her old self and reinventing the rest.
Posted by John "Zanziber" Rogers at 6:39 AM
Email ThisBlogThis!Share to TwitterShare to FacebookShare to Pinterest
Labels: Reviews