Maus: A Survivor's Tale: Book I: My Father Bleeds History 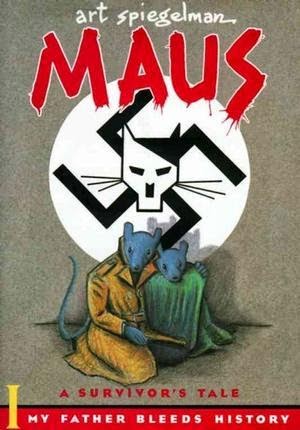 Maus: A Survivors Tale, My Father Bleeds History, by Art Spiegelman is a classic account of a young man’s survival of and endurance throughout the beginning years of the Holocaust. The narrator, Artie, retells his father’s tale of his experiences during the Holocaust as a Jew through this graphic novel. Artie's father, Vladek Spiegelman is the main character in this well written page turner. Although it is not written in the typical form of a novel, it has the power to transform even the most classic reader into an avid graphic novel lover. Spiegelman moves his story through themes that all young readers can draw on. While doing this it also shows artisanship and a master of the language.

During the events Vladek is explaining to his son, Poland was just beginning to feel the grasp of the Nazi’s hands. He saw his first Swastika while taking his first wife, Anja, to a sanitarium. The story began with tales of German cruelty. “It was many, many such stories. Synagogues burned, Jews beaten with no reason, whole towns pushing out all Jews. Each story was worse than the other”. Eventually these acts lead to the mass murder of Jews across the continent. First, Vladek fought for his business, then it ended with him fighting for his freedom and life in Auschwitz. While ending with almost all of the characters dying. “My whole family is gone, Grandma, Grandpa, Momma, Poppa, Tosha, Bibi, my Richiev”! It portrays the hardships of each character, the loss of friendship through such difficult times, and the progression of worsening conditions. The Jewish people are portrayed as mice while the Germans are portrayed as cats. This only emphasizes the complicated submissive-dominate relationship between the two sides.

This novel is not just a story, it is a look into the psychological difficulties related to such events and the turmoil felt by millions of people during and after the Holocaust. The collection best portrays the power of family and the eventual importance of self preservation. While emphasizing these, the story also leaves the reader with an understanding of the importance of interpersonal relationships. Vladek remarried after his first wife, Anja committed suicide in 1968. This left him to find a new wife, Mala who is seen several times throughout the graphic novel. Everytime she is in the novel, Artie experiences the disjointness with his father and his second wife due to the effects of the past. Mala draws on Vladek’s inability to let go of physical items, “He drives me crazy! He won’t even let me throw out the plastic pitcher he took from his hospital room last year! He is more attached to things than people”!

Maus is an ideal novel to use in a classroom studying the Holocaust because it is a nonfiction piece that grasps the reader's attention and forces them to be thrown into the story. Readers must pay attention to the text while also focusing on the pictures as well in order to understand the text as a whole. Sometimes the readers may have to remind themselves that the Germans and the Poles are not actual animals. And because they are drawn as animals, strangely readers may feel more empathy for them because they are always exposed to the killing of humans in movies and on television which makes them immune to it. However, many people find it sadder when an animal dies in a movie because they are cute and cuddly. Not to mention, the relationship between cat and mice is one that is familiar to readers of all ages. But, due to the graphic nature of the novel, it may be only appropriate for students in high school who are studying the Holocaust who may want to do something different than The Diary of Anne Frank.
Posted by John "Zanziber" Rogers at 6:00 AM
Email ThisBlogThis!Share to TwitterShare to FacebookShare to Pinterest
Labels: Reviews