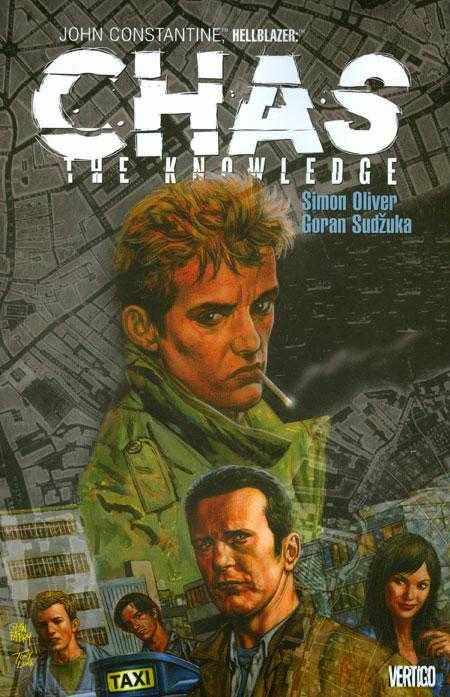 The title character, Francis "Chas" Chandler, holds a fairly unique place in John Constantine's life: where most who know the magus for any length of time die -- or worse -- Chas survives. He's one of the few constants in Constantine's life, along with cigarettes and booze. For many years, Chas, a taxi-driver by trade, has been on the periphery of all the weird stuff his friend is always getting caught up in, frequently playing chauffeur. On the whole, though, Chas' life is ordinary, run of the mill. He carries fares, has an average marriage and otherwise is just part of the everyday fabric of London's life.

Chas' story opens with him dropping Constantine and a sexy young woman at the airport so they can hightail it for fun and sun in Ibiza. With his trouble-magnet friend off on vacation, Chas expects nothing more than average days working the London streets and maybe a pint or two at the local pub. But fate isn't that kind, and when an old chum's son goes missing and something old, evil and hungry awakens in the city, it's Chas who has to step up in place of Constantine and keep London from losing its very soul. The "knowledge" of the title is something known to all London cabbies, but turns out to be very much more, potent magic passed down through the ages in the most mundane bits of information.

Writer Simon Oliver (Gen13) mixes this supernatural plotline -- which has Chas feeling overwhelmed and in over his head -- with a glimpse at Chas' uncertainty about his own middle-aged life. His relationship with his wife is strained, at best (they're certainly not running off to frolic in Ibiza any time soon); his city is edging towards bland dullness and he can't even seem to do right by his friend's son. So when a lovely American steps into his cab, things start to go topsy-turvy and Chas is at somewhat of a loss. He must come to grips not only with saving London, but also the direction his life's going.

If any character in the Hellblazer storyline deserves a moment in the sun, it's Chas. He's put with a lot of crap from Constantine -- and because of him -- over the years, and it's nice to finally see an arc centered on him. Chas is a simple bloke, but not a boring one, and it's easy to see why Constantine relies on him. Oliver does a good job in juxtaposing and blending the two disparate parts of the story, and Goran Sudzuka's art is a good fit for John Constantine's world, making for a satisfying read.

An amusing aside: although Chas is a part of Glen Fabry's fantastic cover illustration for the volume, he's overshadowed by Constantine, who dominates the middle of the image. Poor Chas, even in his own series he can't get any respect! Fitting, though, given the shadow Constantine tends to cast over anyone who lingers near him for long.
Posted by John "Zanziber" Rogers at 6:00 AM
Email ThisBlogThis!Share to TwitterShare to FacebookShare to Pinterest
Labels: Reviews