Last year (2014), my hometown of Salem, Oregon hosted its first comic con. Even though it was held during Mothers Day weekend, it had a good enough showing that a 2nd event was planned for 2015. Last year I came in as strictly a consumer with an agenda of getting some autographs, having a sketch cover done and buying stuff along with taking in everything. This year, I went specifically to take in everything and let you know how the 2nd annual event has changed under its new management.

To start, this year the event is utilizing the entirety of the Jackman-Long building at the Oregon State Fairgrounds. Last year, the event only utilized maybe 2/3 of the building. The floor plan was greatly improved from the previous year as well and it had a feel of a comic con. 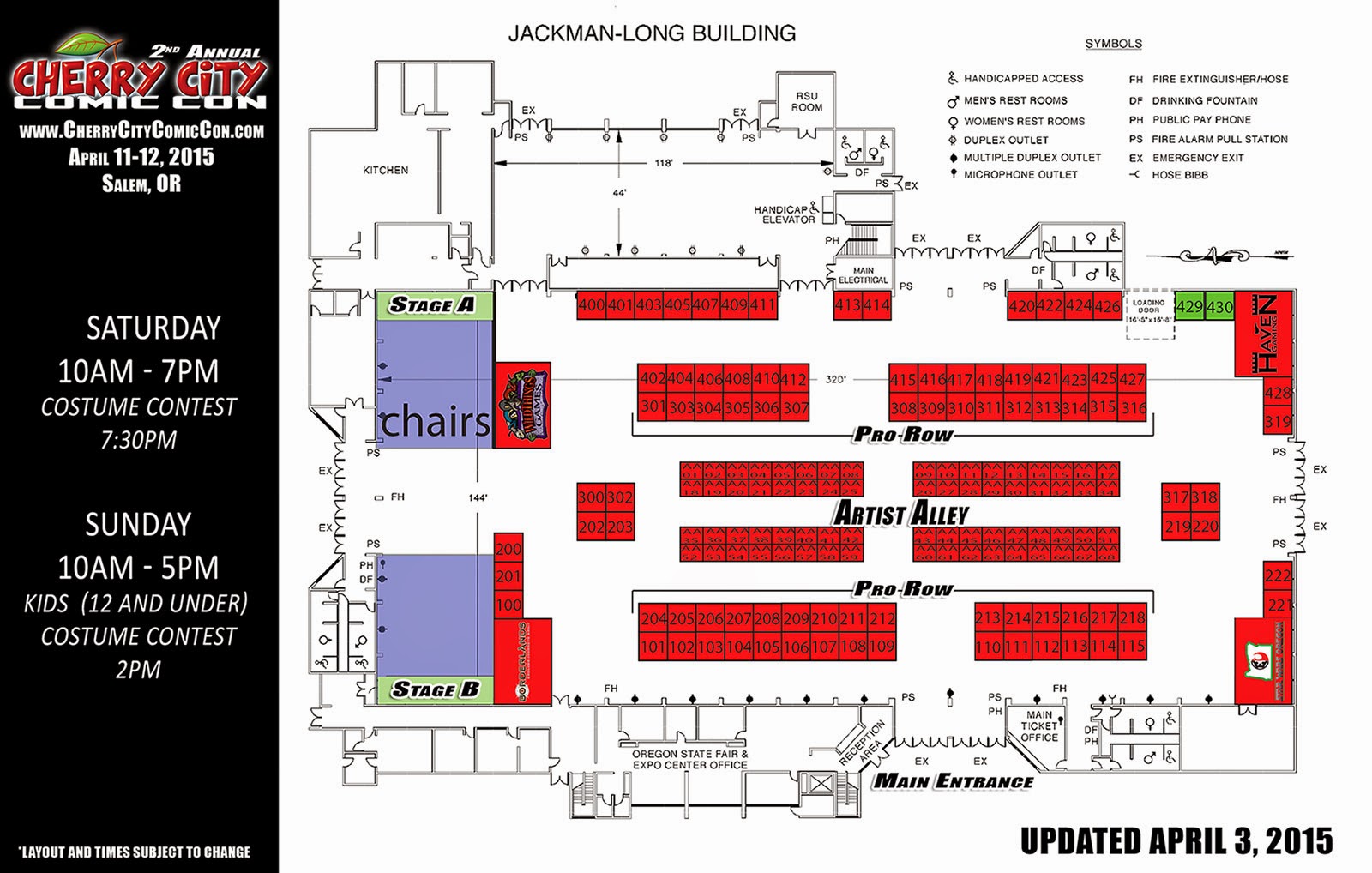 When I arrived shortly after 10am on Saturday, there were 2 fairly long lines. The lines were an obvious distinction between those who had paper tickets and those that were either purchasing or had them waiting at will call.

After waiting in line for 30-45 minutes, a dark-haired lady with a Cherry City Comic Con "STAFF" shirt came out and told those in line that if they had tickets at will call, they could get in the shorter line. When those of us who moved to the new will call line got up to the door, the staff there indicated that they did not have the will call list and could therefore not give us entrance to the event.

Needless to say this little SNAFU upset several people and the staffers were trying to rectify the situation. That is when I saw the organizer from last years event, Mark Martin, in a "STAFF" shirt telling others what to do. This initially upset me because I... along with several others... were informed that he was not a part of the event due to his PR issues in the past. (For further insight as to what I'm referring to, please check out my original comic con schedule for 2015 I posted in January HERE.)


I put my personal feelings aside... got my media pass and wristbands... and went into the event to enjoy.

The 2nd annual event also brought us celebrity guests such as Michael Jai White, Honky Tonk Man and Naomi Grossman. This elevated the legitimacy of Cherry City Comic Con from the last year when there were no media celebrities.

My initial reaction to the show floor was a positive one. They set everything up more like a comic con rather than trying to fill space; something I felt that was done for the 2014 event. This setup allowed for a natural flow through the event. My only issue was the placement of the e-cig/vape vendor next to the entrance of the food area, which also was the only are where you could easily find a place to sit down for a moments peace/rest from walking around. I had to walk through a veritable wall of fog when I went past them.

While I am not against the idea of "vaping", but when you have a setup like that right in front of a high traffic area, I don't think it was a good placement choice. While a single "flavor" of the vapes might be a pleasant smell, the combination of probably 4-5 of them nearly had me choking on the "safe" vapor.

I didn't let this deter my enjoyment from the rest of the event.

My first priority was to connect with my friends who were vendors or guests for the event, so I made the circuit.

First on my list was my pal Tony who owns and operates Tony's Kingdom of Comics and Collectibles. Tony has been the biggest supporter for Comic Book Covers 4 Cancer as he has donated at least 90% of the blank covers we've used to raise $$ for cancer research. Without him, #CBC4C would not be as successful as it has been.

Next stop were a pair of crafty friends "Kitty" and Kristel. Due to the issues from the holiday bazaar, they were upgraded to a corner set of tables. They have a great setup and tons of wonderful creations!

Several years ago I met Adam Gallardo while I was working at The Book Bin in Salem. I have been a fan ever since and now he's the one who works at The Book Bin. If he ever retires from writing, he has a fallback career as a sign-maker as you can see the makeshift sign he had on his table. Such a good writer and a very humble person. He informed me that he currently working on a new project, so keep an eye on what Adam's going to come-up with next.

My next stop was another stop along the trail of wonderful artists who have contributed to #CBC4C in the form of the artist Robert "Floydman" Sumner from Planet F Studios. Floyd has a great style that people love. I now wish I had taken a photo of his original series Star Trek cast cards that he had matted and framed together.

Continuing my trek of artists who have/are contributing to #CBC4C, I came to Randy Emberlin. As my regular reader know, Randy is the artist who originally inspired me to try my hand at comic book inking. He a great artist and wonderful to talk to. He told me that he was getting a lot of people who were interested in the cover he was doing for #CBC4C and he wanted to continue to display it and ink it as well. To see the finished work, go to the #CBC4C Facebook page. I'll have a scan of it in our Finished Covers album.

One of our latest contributing artists to #CBC4C is Randy Kintz. I've been admiring his work online for quite some time, and it was good to finally meet the man behind the art. I always take pleasure in meeting the various artists who have helped, or are willing to help, make #CBC4C successful. We shared some memories about his Larry Hama meetings and my missing him a few years ago when he had the flu and couldn't make it to Emerald City Comic Con. Thankfully, he's scheduled to come to Rose City Comic Con this year. (I already have my application for a media pass filled-out a ready to send.)

I originally met Shua Kreger at the First Wednesday event held back in February. I was introduced to him by his brother and independent comic book publisher (Warrior Innkeeper Creative), Benjamin. Love his work and I appreciate that he can now be counted among the contributing artists for #CBC4C as well. Shua also has a comic that Warrior Innkeeper Creative publishes called Super Vampyre Bunny. For those of you who don't have any Warrior Innkeeper Creative comics available in your area, I know that Benjamin is working to get the digital editions made available through Comixology. When that happens, I will make sure to share it through my Twitter feed (ZanziberPoV).

Another new contributing artists to #CBC4C and AnnMaré Grove and Shawn Cruz from Corrosive Comics. AnnMaré happens to be the daughter of Tony and is also the artist who has ever had the chance to put ink to my skin. (Only 1 tattoo as of this writing... though I hope to change that.) Another thing I can thank Tony for is introducing me to these two. The covers that they're donating are great and you should check them out once I have them posted on the #CBC4C Facebook page. I look forward to seeing more great art come out from this pair as well as the rest of the Corrosive Comics team.

One of the first contributing artists to #CBC4C and his daughter Ashley were also representing Ryan Alonzo's work at Cherry City Comic Con. It was great to finally meet face-to-face and I was fortunate enough to pick-up one of the Undertow complete sets that he had available for sale. I hope we can team-up again for another cover or two.

I've known "Spekle" for a while, and I know she's a great artist. Teamed with her friend Anna they form Battle Ready Artists. As we were talking, I hope to possibly get them to do a cover for #CBC4C. With the current popularity of comic book variant covers from Skottie Young, I think something similar to that Spider-Man you see pictured would do well to help raise $$ for cancer research as well as promoting these wonderful artists.

Last year, Haven Gaming had a large contribution to the gaming events and demo's of various games. This year I didn't see that. I also saw a bigger area for Haven, Wild Things Games and newcomer to this years event Borderlands Games. I really hope for a larger gaming appearance for next years event. It was unfortunately that Cherry City Comic Con opened on International Tabletop Day. I know that there is a strong Magic: The Gathering and Warhammer presence in the area and I can't help but feel that if there were some connected events that included these, and other popular games, that there would be an extra level of attendance.

At the beginning of 2015, I wasn't sure that Cherry City would even be able to grace us with another event. Under the new management, they not only made a huge return, but also got it all done within 4 months time! Kudos! I can't wait to see what they can come-up with when they give themselves more time to schedule.

A special "THANK YOU!" to John Roach who helped make this happen and afforded me with my press pass. Hope to see you again next year!