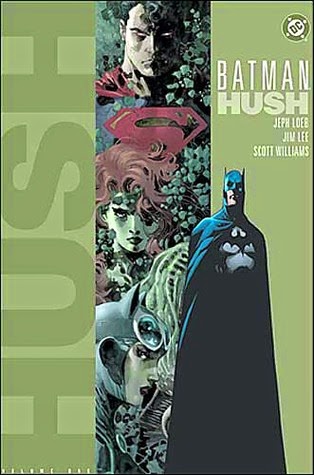 A light, easygoing read that is one part mystery and one part soap opera, Loeb delivers with his usual flair for drama and character insight. All the right parts and pieces necessary for a drawn-out, slowly unraveling revelation are there; yet the first half of this story arc is curiously lacking in real suspense, while the rather lightweight plot feels more like Loeb is going through the motions of telling a story that is too contrived to be very engaging.

The story opens with Batman rescuing a young boy from the clutches of Killer Croc, a villain who doesn't usually have enough brains to pull off a complicated stunt like kidnapping. Batman rescues the boy but suffers grave injury: his bat-line is cut midflight, sending him plummeting to the streets below. He recovers with the help of Tommy Elliot, a childhood friend from Bruce Wayne's past who just happens to be a rather brilliant surgeon. Elliot's character is introduced to the Batman mythos through a series of well-placed flashbacks, which is one of the things Loeb manages to get right.

Batman assumes that there must be someone behind Croc pulling the strings, and his assumption is dead-on. After visiting Croc in prison, the trail of clues Batman follows leads him to Catwoman, Poison Ivy, a night at the opera and a rather cliched showdown in Metropolis with Superman. It quickly develops that there is indeed a villain hiding from the shadows, working out a scheme against the Batman.

While beautiful to look at, there is a lack of real substance in the story, which is slow to start and is additionally hampered by a plot line that has by now become a familiar staple in the Bat-universe; namely, that some unknown villain has a vendetta against Bruce Wayne/Batman and is masterminding a complicated plot to destroy him a piece at a time by going after the people he cares about.

It might have been intriguing if it hadn't been the exact same predominant theme in the yearlong Murderer/Fugitive crossover story arc, as well as being the central theme of the eight-part miniseries, Batman: Family, which immediately followed. Both of these stories took place right before Hush with hardly a break in the pattern. The rather striking resemblance between the plotlines for each maxiseries might be reason enough why the story feels so flat. While an entertaining return to the days of simple, pure fun that brings to mind the Batman of the '70s and early '80s, the theme of a villain trying to bring down both Batman and Bruce Wayne through a series of sneak attacks that are meant to cripple his spirit and break his will is a rather shopworn concept, and has been since the days of Bane.

Even by itself, though, Hush is nowhere near as gripping as Loeb's earlier, excellent work in The Long Halloween or its sequel, Dark Victory, which featured complex plots paired with avant avant-garde style art that perfectly matched the pacing of both stories. The art in Hush is perhaps part of the reason why it's so hard to take seriously: Jim Lee's style, while visually lush and stunning, does not seem well suited to Gotham's gritty soul but is married instead to places like Metropolis, where Lee's ability to showcase the heroic aspects of a superbeing's anatomy and the huge skyscrapers of the city is more at home. There's a very sexual element to his art; he draws Batman's boots, Poison Ivy's clinging vines and Catwoman's strategically placed whip very, very well. While enticing, it's such a theme in both the cover art and throughout the series that it has a feel of late-night, soft-core cable porn and is not necessarily helpful to the plotline, which unfolds at the speed of molasses being poured.

The characters, including yet another new character from Bruce Wayne's past, are well done if somewhat one-dimensional. The internal dialogue of Batman has a somewhat generic quality that doesn't really let us into his mind or motives very well, and a long-anticipated romantic scene between him and Catwoman feels very contrived, more of a letdown than a surcease from the overt sexual tension that has always coursed between the pair.

There are some wonderful moments in Hush, including a scene with Bruce and his friend Tommy looking up in the sky at a younger Green Lantern (now Sentinel) doing battle with the bad guys. It recalls the earlier days of old-fashioned comic book superheros to which this story seems to be a homage, with its rather standard superhero scripting and setup fight scenes. It's not what one would expect of Loeb in terms of writing but, overall, Hush is a welcome return to the pre-Miller days of Batman as a more humane, less complicated human being. While somewhat shallow, there's a definite feel that this Batman is more sane and less twisted than he has been in recent years, and that, more than the slow pacing that keeps the story from truly advancing, is reason enough to enjoy one of the better Batmans we have had the pleasure of reading in a long time.

Lee's artwork, rich in hues and color and detail, are a good if not entirely perfect fit to this series. The panel work is sometimes too choppy to follow but, taken as a whole, is stunningly beautiful and one of the more well-illustrated Batman stories. The artwork alone is worth the price, and the story does manage to generate a degree of curiosity, just enough to make you wonder what happens next. Hush is definitely worth a look.
Posted by John "Zanziber" Rogers at 6:00 AM
Email ThisBlogThis!Share to TwitterShare to FacebookShare to Pinterest
Labels: Reviews