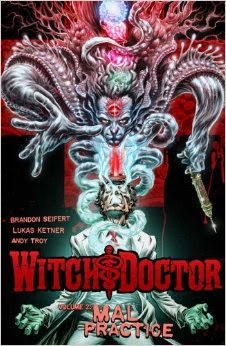 Brandon Seifert and Lukas Ketner’s Lovercraftian Horror-cum-medical drama is every bit as funny, inventive, and engrossing in the second trade as it was in the first. For those unfamiliar, Witch Doctor stars supernatural physician Vincent Morrow, former army paramedic Eric Gast, and anaethesiologist/demonic killing machine Penny Dreadful, as they treat possessions, curses, and demonic rituals with the same medical methodology that Gregory House treats biological illness. To Morrow and his assistants, they represent a sickness caused by pathologies (represented by the ghosts and ghoulies we all know and love) assaulting or feeding off of a person’s spiritual immune system, better known as their soul.

The adventures collected here are no less fun and creative than before. Right off the bat, Morrow meets a supernatural pathologist attempting to graft the mummified kidney of an Egyptian death god onto a human host in hopes of reviving him. Later on, there’s an awesome homage to Fantastic Voyage as the good doctor astraly projects himself into his own body in an attempt to treat his own illness. The quick wit, well-thought out analogies to traditional biology, and Ketner’s gorgeous art make me want to go back and re-read the whole thing again just from mentioning it.

Mal Practice isn’t all lighthearted horror-adventure, though. In this volume, Seifert  hints at unexplored depths for many of his supporting characters. Though only present in a panel or two, he does an excellent job at showing that Eric’s time on the battlefield is not completely behind him, adding a new dimension to his actions that wasn’t there before. I won’t spoil too much, but the development for Penny is particularly interesting, tying her more intrinsically into the shadow cast over the book by the potential for imminent Cthuloid doomsday.

It’s also worth mentioning that Seifert has REALLY done his research here. In the second trade of the series, he starts delving into the even more obscure monster mythos, including creatures who harken back to legends of Baba Yaga and the Strigoi of Russian and Romanian lore. It’s really, really cool how he manages to mold them to fit within Morrow’s mystical medical model while maintaining the spirit of the original source material. On the back of this trade, Publishers’ Weekly describes Witch Doctor as reading “a bit like a mashup of Doctor Who and Lovecraft”, and I couldn’t agree more. The precarious balance between levity, darkness, and science fiction that the creators strike here make it a super-enjoyable read for anyone who digs horror.
Posted by John "Zanziber" Rogers at 6:00 AM
Email ThisBlogThis!Share to TwitterShare to FacebookShare to Pinterest
Labels: Reviews