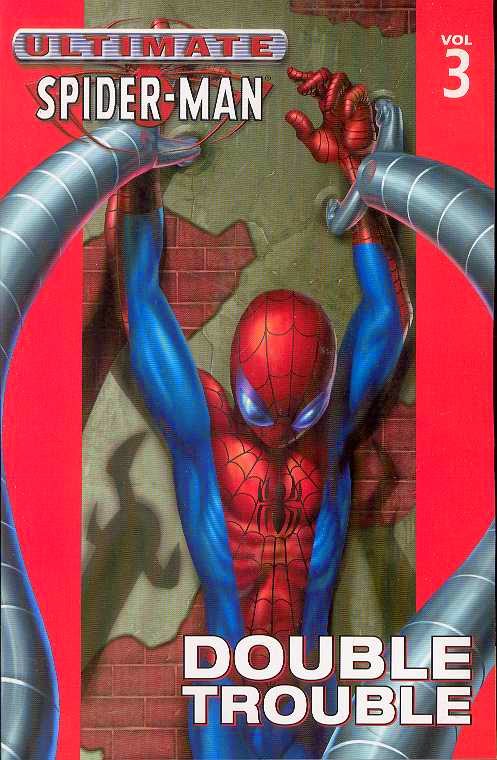 After Marvel’s problems of the mid 1990s, the company came back swinging, and one new concept was the remodeling and modernizing of their core characters for the new youth culture. The ‘Ultimate’ imprint abandoned the monumental continuity that had been Marvel’s greatest asset and the company’s major characters were given a separate universe to play in and makeovers to appeal to a contemporary, 21st century audience.

Collecting issues #14-21 of the ultra-updated Ultimate Arachnid, this volume amps up the angst with the newly modified Doctor Octopus and the Australian TV star Kraven the Hunter, each setting their sinister sights on the spindly neophyte superhero: One for revenge and the other for publicity and a movie contract.

The convoluted silliness of the original Spider-Man is just beginning to creep into these tales, but quite frankly, that’s unavoidable if you’re producing soap-opera super-heroics. For the moment however there’s still Peter’s developing relationship with drop-dead-gorgeous girl-next-door Mary Jane, the introduction of stunning – and possibly psychotic – bad-girl Gwen Stacy, loads and loads of glossy action and a running stream of people who might have deduced Spider-Man’s secret identity…

Frantic fun with a sharp edge to it, this version of Spider-Man is very similar to the movies and that must surely be a benefit to all those converts from celluloid to paper adventuring.
Posted by John "Zanziber" Rogers at 6:00 AM
Email ThisBlogThis!Share to TwitterShare to FacebookShare to Pinterest
Labels: Reviews