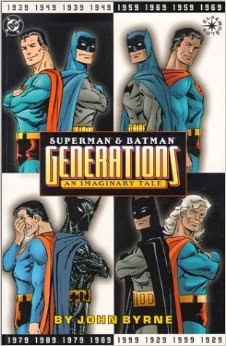 Working on the biggest guns in any company’s publishing stable is like being King Canute. You get the major gig, make your irrevocable, industry-shaking refit of said star-vehicle and then as time passes, watch it get inevitably changed or as with DC in current times changed back to suit the restless drive of the fickle fans.

After Crisis on Infinite Earths the myriad alternate Earths that had housed different eras of DC heroes as well as providing handy accommodation for the company’s acquisitions such as Fawcett’s Marvel Family and retinue or the Charlton Action Heroes line had been amalgamated into one bulky, homogenous whole, and the company took the opportunity to retrofit their major stars into the bargain.

Batman got darker, Wonder Woman was culturally re-cast and Superman had all the charming Mort Weisinger/Murray Boltinoff/Julie Schwartz additions and contributions to the original Siegel & Shuster paraphernalia jettisoned by revamp architect John Byrne. Out went the friendship with the Caped Crusader, the entire career as Superboy and all the tenuous, wondrous baggage of fifty spectacular years.

And then he decided to bring it all back…

In the four-issue Prestige format miniseries Superman & Batman: Generations, An Imaginary Tale published under DC’s non-continuity “Elseworlds” imprint in 1999, Byrne posited a world where the Man of Steel and the Caped Crusader began just as they had in the dog-days of the 1930s, and by sampling all the eradicated material prior to Crisis, explored how the pair would have fared had they aged like us relatively real people.

Written with obvious affection and referencing the magnificent alternate-continuity flights of fancy dubbed “Imaginary Stories”, but with a more mature modern sensibility the saga progressed in decade-wide jumps that followed the family and friends of the World’s Finest Heroes in an epic struggle spanning the years 1939 to 1999, with a punchy postscript set in 2919 but revealing a secret origin in 1929.

Beginning with ‘The Vigilantes’ where two new mystery-men, Superman and Batman first meet to defeat the mad scientist Ultra-Humanite at the New York Word’s Fair, jumping to ‘Family Matters’ in 1949 where the Joker and Luthor kidnap Clark Kent’s wife Lois, the ‘Strange Days’ of 1959 where aging Dark Knight and Metropolis Marvel battle Bat-Mite, Mr. Mxyzptlk and a host of weird aliens and monsters whilst their children prepare to succeed them or tragically fall the turning point comes with the ‘Changing Times’ of 1969.

Now elder statesmen of the heroic community Batman and Superman watch their children deal with such complex issues as corrupt US President Nixon, the Vietnam War and massive social unrest, only to lose one of their own to the ageless madness of the Joker.

‘Twilight of the Gods’ in 1979 introduced the eco-despot Ra’s Al Ghul to the saga as triumph and tragedy continued to dog the heroes’ descendents and one of their oldest foes struck his most telling blow, whilst ‘Crime and Punishment’ a decade later found the revenge-crazed Superman a disgraced and hunted felon for taking the law into his own hands, with the epic proper ending in 1999 with ‘Beginnings and Endings’ as the fragmented survivors of the twin heroic dynasties reunited after years at odds.

The epilogue ‘1929’, using the magic of comic-books leapt into the 30th century to reveal the actual first meeting of Superman and Batman, a rather saccharine conclusion that was clearly meant to presage the inescapable sequel…

Complex and professional yet somehow inadequate and unfulfilling, the time-girdling circularity and touchy-feely happy-ending is strongly reminiscent of Robert Heinlein’s later Lazarus Long novels (but lacking the satirical bite), as Byrne focused far too hard on adding everything Silver-Aged-and-the-Kitchen-Sink to the mix, but for all that this is still a hugely readable piece of sweetened fluff, beautifully engaging and thoroughly engrossing, and might well act as a gateway tale for new readers and young fans to try the older material for themselves.
Posted by John "Zanziber" Rogers at 6:00 AM
Email ThisBlogThis!Share to TwitterShare to FacebookShare to Pinterest
Labels: Reviews