Zatanna: Shades of the Past 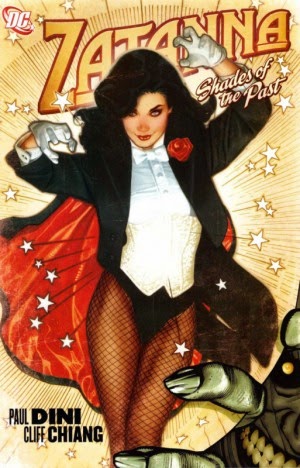 Title: Zatanna: Shades of the Past

Shades of the Past is the second trade paperback finishing off Paul Dini’s run on Zatanna, as well as the finale of the book before the big New 52 relaunch.  Sadly, this was not one of the books to be relaunched either in neither the first wave nor any of the subsequent ones.  It is quite a shame as well as she is a character with so much potential.  Currently though you can find her in Justice League Dark for all new adventures.

I found this particular volume better than the first.  There was more action in it which kept the story moving at a bit of a quicker pace and the stories themselves were more interesting.  Also, it felt like Dini himself got a better handle on the character and was more comfortable writing her as the series progressed.  Compared to the first volume which I looked at earlier, it was miles ahead better than the first.  Not to say that the first one was terrible, but if I were to re-read them, I would definitely go for this one.

The best story dealt with a possessed marionette or more accurately a man transformed into one by Zatanna’s father Zatara.  It was a good blend of story and action with just the right atmosphere to accompany it.  It was fun, and creepy (talking dolls!) and it had Zatara – one of the best characters ever.  It is not often we get to see Zatara in a comic and when it happens, it is usually pretty awesome.  The other stories were good, but this one was the best by far.  Good stuff all around.

Overall, it was a very solid ‘second’ chapter of the ongoing series.  Again, it would have been nice to see where Dini would have taken us if the New 52 had never come along.
Posted by John "Zanziber" Rogers at 6:00 AM
Email ThisBlogThis!Share to TwitterShare to FacebookShare to Pinterest
Labels: Reviews