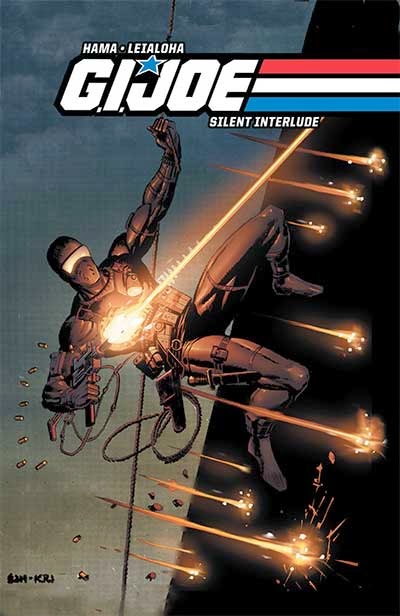 Way back in 1984, when Marvel Comics held the license to publish comic books based on the ridiculously popular G.I. Joe toy line and animated series that Hasbro had unleashed upon the public, it was pretty much universally agreed upon by pre-pubescent boys the world over that Snake Eye’s was the coolest character in the history of the universe. And yeah, those comics that Marvel was pumping out every month? They were pretty fun. They were able to expand on what was established in the TV series and provide fertile minds with plenty of ideas for action figure adventures of their own undertaking.

When issue #21 hit shelves, however, it was a whole different story and fans witnessed then what would go on to be widely considered the coolest story to have ever been told during Marvel’s run with franchise. Not only did it focus on Snake Eye’s pretty much entirely, but the whole thing was done without a single word balloon. No dialogue! It made sense, given that Snake Eye’s doesn’t speak, but still…. no dialogue!

The story was simple enough and fit right in with the continuity established in the twenty issues prior though, like issue #20, it was a standalone story. Written and penciled by Larry Hama and inked by Steve Leiahola with colors by George Roussos, the splash page shows us Stormshadow flying on a glider to Cobra headquarters with Scarlet in tow. He’s holding her captive, much to the delight of Cobra Commander (featured here in his best uniform, the hooded version!). As Scarlet is taken to a holding cell on the lower level of the base, a green air force plane flies overhead. Snake Eye’s jumps out, knowing full well that Scarlet is there and that Stormshadow is going to rough her up a bit.

Destro is monitoring the surveillance system and is alerted to the presence of an intruder. As Snake Eye’s lands on top of the base, Scarlet uses a hair clip to try and get out of her shackles. She succeeds and dupes Stormshadow, bravely making her way out of the cell and into the base itself. Snake Eye’s takes out countless Cobra grunts, ninja style, but then must confront some of Stormshadow’s ninja troops before taking on Stormshadow himself. Will Snake Eye’s and Scarlet make it out of Cobra headquarters alive or will Stormshadow’s take them both out once and for all?

Of course, we all know the answer to that but in 1984, the suspense for younger readers delving into this issue for the first time was pretty real. This comic broke the rules – it left it up to us to fill in the blanks but gave us enough info through clever panel layout and facial expressions that we had no trouble doing that. It offered up everything that we could ask for in a G.I. Joe comic of the era: ninjas, hand to hand combat, great locations, and yes, even some character development (there’s no way that this adventure didn’t go on to solidify Snake Eyes’ relationship with his lovely red-headed associate!). It was mind-blowing when it hit stands and it remains a superb example of visual storytelling to this day.

So in addition to the original comic, presented in a newly restored edition scanned from the original artwork, we get some pretty great bonus features too. First up is an introduction by Mark Bellomo that precedes Silent Interlude and offers up some great history as to how and why this issue came to be. See, the regular creative team had fallen behind and rather than skip an issue, Marvel kept an inventory on hand of single issue stories to keep the gravy train rolling. We also learn about the importance of Larry Hama’s work on the series at this point, not only as a penciller but as a writer and editor as well and how his personal want to try to tell a story completely without words eventually lead to this issue’s birth. We also learn how Hama’s visit to the animation house working on the cartoon inspired the idea for this issue and the perfect setting for the story to take place in and after that, how Hama went back to his New York City apartment and put the whole thing together over a remarkably quick three day stretch. Oddly enough, after this issue went to press Marvel got letters from kids claiming their copy was misprinted, because all the words were missing. The essay then goes on to (rightly) make the case for the influence and importance of this issue and Hama’s work. It’s a fascinating behind the scenes story and one well worth reading BEFORE sampling the comic itself.

IDW has also provided all of Larry Hama’s breakdowns for the issue, and though they weren’t able to be scanned from the original pages (the splash page is inked, the others are just pencils), this black and white un-inked and uncolored version allows us to further appreciate Hama’s fantastic layout and design skills employed in this issue. It’s rough and a little sketchy looking but anyone who enjoyed the issue will relish being able to see what went into getting it made.

This is followed by a second text piece, simply titled Issue Notes, that give us plenty of welcome background information on Snake Eye’s and how the character was created and evolved over the run, leading to his becoming arguably the most popular character in the series. We get a similar rundown for Stormshadow and plenty of quotes from Hama as to what he was going for with his work on this series add plenty of interesting historical context here. There are also some continuity notes that might answer a few questions regarding how their stories play out, some notes on the vehicles used in this issue and a small list of corrections that were made from the original version.

From there, IDW presents issue #19 of their series, G.I. Joe Origins. Written and laid out by Hama with finished pencils from Joe Benitez, inks by Victor Llamas and colors by J. Brown, this is a fun follow up story to the original issue from the eighties and once again, Hama does it all without a single word of dialogue. When the story begins, Snake Eye’s is jumping out of a personal carrier. His parachute lands him safely in a deeply wooded area where he sees a wolf caught in a barbed wire fence. He frees the wolf which triggers an alarm at a nearby installation. Enemy forces arrive via snowmobile but he takes them out quickly and uses the snowmobile to get to the base where those inside are planning to take down the plane he jumped out of. A battle ensues, the enemy helicopter gets airborne and Snake Eye’s destroys what he needs to destroy before fleeing the base. Enemy soldiers give chase, but you just know Snake Eye’s is going to win the day.

This is a fun take on what made the original so involving but it never quite reaches the same level of intensity. Still, it’s well drawn and once again very well laid out. The use of color here is strong and there are a couple of really striking panels that impress. Hama also does a great job of tying the ending into the opening with a neat twist that somehow feels completely appropriate.

Closing out this hardcover collection is a reproduction cover of the original issue’s piece illustrated by Ashely Wood for Hasbro’s line of G.I. Joe 25th Anniversary toys. All in all, this is a really thorough, comprehensive and lovingly put together document that presents the original story in all its remastered glory along with a nice companion piece and, almost as importantly, a whole lot of text documenting the history and influence of the comic.