Trekker: The Train To Avalon Bay 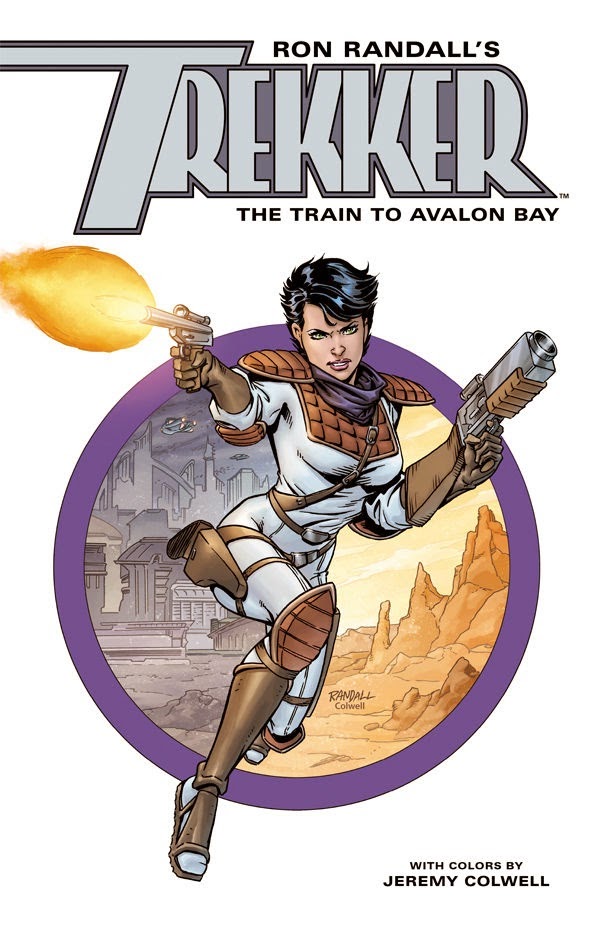 When I first met Ron Randall at the 2013 Stumptown Comics fest, I had not hear of Trekker before. He was selling copies of B&W Trekker ashcan along with copies of the Trekker issue published by Image Comics.

I originally didn't think too much about it as I was raised on Marvel and DC titles with superheroes and G.I. Joe. I'm glad I read those issues I picked-up because now I am a big Trekker and Ron Randall fan!

Ron Randall’s Trekker: The Train To Avalon Bay is an fantastic read.  An all-new story featuring Randall’s character, Mercy St. Clair, who made her debut during the height of the indie comic boon of the late 80’s in the pages of the original Dark Horse Presents.

Known as a Trekker, she is a strong willed, tough-as-nails, bounty hunter and is pretty much everything you could ever want from a sci-fi heroine.

A stand out comic back in the day and a breath of relief for those looking for a comic story where the female main character doesn’t rely on skimpy costumes and her feminine wiles to get what she wants.

It still rings true today, more than ever.

That isn’t to say she isn’t sexy or succeeds in her missions. She is highly trained and as deadly as she is beautiful.

The Train To Avalon Bay does not disappoint.

Full of action and a very taut, well-told story. I found this to be one of the most emotional and vulnerable stories Randall has told so far featuring Mercy. You really get to see a more sensitive side of her, when her friend, whom she is on vacation with, is put in the line of danger as a train they are on is attacked.

Picking up sometime after the tragic events depicted in the last story, The Train To Avalon Bay opens on a gorgeous action splash page as Mercy is about to take down a known thug she is after. The bounty for which she is planning on upgrading her equipment and weaponry. That is until her dear friend, Molly, convinces Mercy that she needs a break and drags her on vacation with her. While boarding the train Mercy spots three men, whom she marks as feds and a possible witness. She has second thoughts about the trip but Molly is insistent and they begin their train journey to Avalon Bay. Things are not as they seem as action, intrigue, and danger all explode in brilliantly written and drawn panels.

Ron Randall is no stranger to action and his art just keeps getting better and better with every book he puts out. His handle of dynamic panel composition and fast-paced story telling gives the reader the feel of being in the action and you feel every bullet, hit, and hard right hook. I found myself riveted and needing to turn the pages faster and faster as the story went on.  His absolute mastery comes from his ability to write well-rounded, fully developed characters you care about.

The Train To Avalon Bay is no exception.

As I mentioned earlier this is the most emotional I have seen Mercy in a long time. She still retains the badassery you expect from her, however, now that it is her dear friend is caught up in her world Mercy starts letting emotion and flawed judgement cloud her process and more than a few times it almost costs her and Molly their lives.

I can not recommend this book highly enough, especially for anyone looking for a really strong female led comic that is smart and well-written. Ron Randall has really outdone himself and I must say, for a series that started as a black & white title, the new colorist, Jeremy Colwell, really gets the Trekker world and how Ron inks his books and doesn’t let the colors get in the way of the art. It enhances it. Subtle and muted and never distracting I really love this collaboration.

Finally, anyone who picks this up will be treated to an extra cool crossover story that began as a online motion-style comic called City Of The Dead it features the artwork of both Ron Randall and Karl Kesel. It is a “silent” story featuring a team-up of sorts with Randall’s Trekker and Kesel’s Johnny Zombie. It is fun and beautiful to see. Along with the extra story there is a pin-up section featuring some amazing indy comic talent and their take on Mercy and her adventures. Featured are, Mark Shultz, Steve Leiber, Karl Kesel, Rich Ellis, Coleen Coover and a bunch more.

I highly recommend picking-up some Trekker, though don't start with this trade if you want to follow the complete story. Pick-up and read the Trekker Omnibus first. After you read that, you'll want to pick-up Train to Avalon Bay.
Posted by John "Zanziber" Rogers at 6:00 AM
Email ThisBlogThis!Share to TwitterShare to FacebookShare to Pinterest
Labels: Reviews