Ghost Volume. 1: In the Smoke and Din 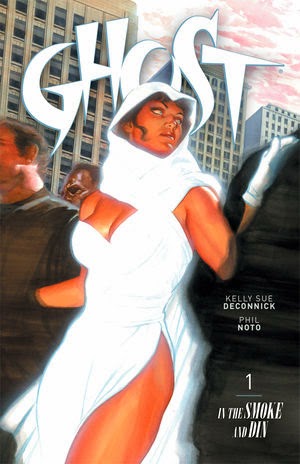 Title: Ghost Volume. 1: In the Smoke and Din

As part of Dark Horse’s superhero revival, Phil Noto and Kelly Sue DeConnick were tasked with reviving this old property. Given their skills, it was a no brainer the book would be interesting. However, in an industry drowning in superhero universes, their real job is too make the book good enough to justify its existence.

One warm night in Chicago’s Resurrection Cemetery, paranormal investigators Vaughn and Tommy accidentally summon a beautiful transparent woman who may or may not be the legendary Resurrection Mary. Their search for her true identity uncovers a dark, hidden history of the city and a deadly alliance between political corruption and demonic science! In the middle of it all stands Ghost, a woman trapped between two worlds!

“Ghost” has a classic premise at its heart: Being the only person who walk between two worlds, usually to maintain a balance or bring peace. Ghost Rider does it. John Savage did it in “Brave New World.” Neo did it in The Matrix. Shoot, Jesus did it in the New Testament. The trope exists because it has appeal and potential, but when a story exists among a saturation of similar plots, its success relies more on execution than on originality. As such, this review will be a bit more nit-picky than usual.

This first volume collects issues zero through four of the miniseries. Issue zero, which was serialized in three parts in the pages of “Dark Horse Presents”, is narrated by Vaughn, one of the paranormal investigators mentioned in the solicitation. The other four issues are narrated by Ghost. Read issue to issue, this change was minor, made narrative sense, and was easy to forget. Read in a collection, it stands out in a bad way. Through Vaughn’s inner monologue and personal troubles, he starts the series in the lead role. Then, just as you get invested in him, Ghost takes over and the guy you like most is suddenly bumped to supporting cast. Sure, he’s still there, but he’s only important so much as he impacts Ghost’s quest to find out who she is, and his problems are only as important so much as they impede said quest. While it is a given Ghost is the star of a book called “Ghost”, the trade would read easier if the narration switch occurred between volumes.

The central mystery is well orchestrated, and the various clues all hold up to multiple readings. There are a few things that seem mighty convenient – like how Tommy got his machine in the first place. The good news is how all of them are open for explanation and expansion in future issues, and not so awkward as to just be inexplicable. The only part of the story which is truly puzzling is in the first chapter. Two men come to kill Vaughn and Tommy, and one of said goons dies. The second goon seems to vanish from the scene and existence, as he is never mentioned again by anyone.

Noto’s pencils fall on the left of center on the minimalist to detailed spectrum, and hover back and forth between neat and sketchy. Backgrounds are plain if they’re included, but he usually opts for just a solid color backdrop. Most of his characters are distinct, although in the final act all the men are wearing tuxedos and the only way to tell Vaughn apart from the villain is a curl in his hair. Noto’s line work lends itself to expressive faces, but the blocky style he uses for coloring gives his panels a static look usually associated with photo referenced art. For some reason, he will occasionally leave the pupil out of someones eyes, which can give them a creepy look which seems inappropriate to the situation.

The five chapters in this volume work together to present a full story, resolving the main mystery to satisfaction and bringing subplots to a point where they aren’t so much dangling as they are pointing the direction for the next part of the series. When the ongoing series begins, it will have a clear mission.
Posted by John "Zanziber" Rogers at 6:00 AM
Email ThisBlogThis!Share to TwitterShare to FacebookShare to Pinterest
Labels: Reviews