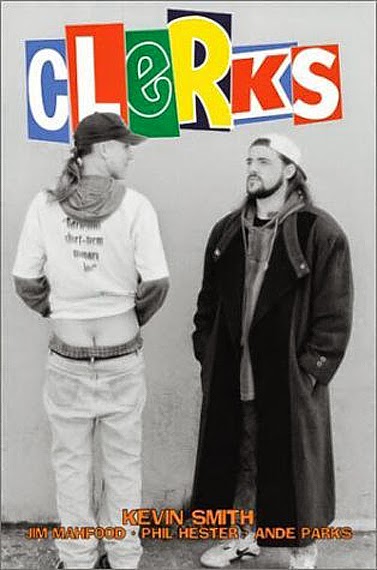 Based off the cult movie of the same name it collects the three issues released in trade paperback form.

If you haven't heard of the movie, I don't blame you; it's one of those that have grown through word of mouth and a rabid fanatic fan base. The story is pretty simple, it's the story of two young men who are stuck in dead end jobs, which pay poorly and have long and unsociable hours. There is no big adventure or life changing story to it, it's about there lives and how they just get by with what they do, never motivating themselves to change for anything better.

Dante - Works at the Quick Stop, very depressed with his job, the lack of money he makes, the customers who come in the store and he finds generally very annoying. Taken advantage of quite a bit, whether it is by Randal, the owners of the Quick Stop, even customers.

Randal - Works next door to the Quick Stop at RST Video. He is lazy and spends more time in the Quick Stop talking to Dante rather than dealing with customers at RST who get very annoyed that the store seems to be shut most of the time. Randal deals with them by being rude, ignoring them and telling them deals going on at the rival video store.

Jay - Foul-mouthed, loud, rude, obnoxious, abusive, pot dealer who hangs out at the Quick Stop all day looking for trade. He is in his twenties but acts like he's twelve.

Silent Bob - Jay's 'Hetro-Life-Mate' complete opposite of Jay. He's called Silent Bob for a reason, as he doesn't say much usually expressing him opinion with facial expressions. Hangs out the Quick Stop with Jay selling pot. He is much more sensible and intelligent than Jay.

It starts with Randal looking at the toys (action figures) down at the local comic book store. He's amazed at the price they sell for and so he drags Dante into the world of Star Wars action figure selling.

Meanwhile Jay is not pleased that people aren't buying weed because there spending there money on Star Wars figures, so with Silent Bob decides to go do something about it.

It's Christmas time, a time of good will. So Dante decides to visit his old girlfriend Caitlin in the mental hospital (you see why she's there in the film). While Randal is sure Saint Nick, is next door in the quick stop. Plus Dante is smug as he's about to win a bet with Randal he made 15 years ago - that Randal would still be wearing his Montley Crew jacket he got for Christmas 15 years ago? But will Randal manage to get his hands on a replacement?

Here we see the bit where Dante and Randal going to the funeral (in the film it shows them driving there, then a '10 minutes later' tag appears on screen with some people chasing them out the funeral parlour). So we see Dante paying his respects to his old girlfriend Julie Dwyer while Randal is just there for the fun of it?! It's all a bit awkward for Dante as Julies parents caught them in a compromising position and Dante would do anything to not get noticed, but he drops his car keys in the coffin, down her skirt... whoops!

Part of the appeal of these is that they are written by Clerks Director/Writer/Actor Kevin Smith so you feel the characters are staying true to themselves rather than feeling like fan-fiction which is what seems to happen with other well known franchises that get a comic series made.

This is done in a thick black and white style giving it the feeling of the movie (which was done in black and white). The first two comics are drawn by Jim Mahfood and have a more cartoonish style where as the lost scene was penciled by Phil Hester and inked by Ande Parks is drawn in a more 'serious' style, looking pretty much like the two main characters in the film

I'll also point out that all the characters seen in Clerks Dante, Randal, Jay and Silent Bob all look like their characters from the movie. Also Steve Dave and Walt the Fanboy (who make numerous cameos in Smith films) also look like the actors who play them. The only character I would say who looks different is Caitlin. Whether this is because of payment of image rights I don't know.

If you've seen Clerks, you'll know it's has very vulgar language and descriptions - this has not been toned down in the comic book. So it's not suitable for young people, maybe 16+

I really enjoyed these stories, especially the first two that inspired me so much that when I first read them I spent many months doing drawings copying Jim Mahfood style.

I always really enjoyed the Clerks film thinking Dante and Randal where the two best and most 'real' characters Kevin Smith had come up with and was begging for more stories about the life of Dante and Randal. I guess Smith felt the same otherwise he wouldn't have made Clerks II.

The best stories was definitely the first it was so funny hearing Randal pitch to Dante why getting in the business of Star Wars figures was such a good idea while Dante thought it was joke that a movie that had been out for 20 years made 100 million at the cinema.

The second one was pretty good and made reference to the Clerks movie with Caitlin. To be fair you don't need to have seen the Clerks movie to enjoy this story (especially as it refers in the dialogue what happened to Caitlin) I hadn't actually seen the film till after I read this. I was quite pleased with this one as it lets Jay and Silent Bob take a backseat, only appearing on a couple of pages and you get to see Dante and Randal carry a fun compelling story.

The third is easily the worst of the three I can't say I care it's a 'lost scene' or not. It just goes over the top with Randal behaving like a dick at a funeral (I can't really believe even he would do that? I know through the film you see him act like that, but I still felt it was something no one would do at a funeral). However the gross-out-humor in this was quite amusing and the Alyssa Jones cameo (you know the lesbian in Chasing Amy) was quite good "Why do you smell of shoe polish?"

My only disappointment was that Smith didn't continue doing more Clerks stories and went where the money was with 'Chasing Dogma' and 'Bluntman and Chronic' comics instead, which in my opinion never quite reached the laughs that this book gives you.
Posted by John "Zanziber" Rogers at 6:00 AM
Email ThisBlogThis!Share to TwitterShare to FacebookShare to Pinterest
Labels: Reviews