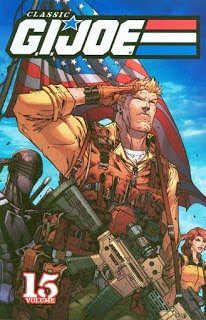 Phil Gosier is the artist for the bulk of this book, and he completely sucks ass. My tastes are admittedly “Western” when it comes to comic book art. I disliked Manga back when it was called Japanimation. Manga is like Punk Rock to me. I like the things that inspired them, and the things that were perhaps inspired by them, I'm just not a huge fan of the genres themselves. Gosier draws everything in typical garish '90s fashion, with everyone looking like they are on steroids. Horrible.

Issue 152 is a commemorative issue of the 30th anniversary of G.I. Joe, telling the story of original Joe. Hama should have gotten lots of mileage out of this concept, but he was abruptly taken off of the book after this issue. 153 is a complete piece of shit Terminator ripoff, with this latest generation of Cobra B.A.T.S. looking a lot like something from the second film. Issue 154 starred Roadblock in a godawful, cringe-inducing story. Finishing this book was like chewing chalk while hearing someone scratch their nails on a chalkboard.

Issue 155 was a touching, heartfelt goodbye by Larry Hama. It's a shame that he didn't get more of a heads up that the series was being cancelled, as I'm sure that he would've given the Joes one helluva sendoff. Hama's writing was most certainly a fish out of water in this volume, a writer who excelled at action packed war comics in an era when editorial didn't want an action packed war comic. He leaned on ridiculous meteor missions and other nonsense as the title limped through it's final year. G.I. Joe was decommissioned at the end, and would remain so for a number of years. There were a few companies who published the series in the Aughts (Devil's Due, etc.), but it was IDW who put them back on the map with Larry Hama scripting again. They even picked up the original Marvel continuity and numbering.

As usual for this line, IDW has, in their infinite wisdom, omitted several things from this collection. There were seven pin-up pages in Issue 150 which were not included here. There were six character profile pages in Issue 152, none of which are included here. The letters pages from issue 155 had a farewell from Larry Hama which would have made a nice addition to this book. All that I can say is that Marvel would've included it if this were their collected edition.
Posted by John "Zanziber" Rogers at 6:00 AM
Email ThisBlogThis!Share to TwitterShare to FacebookShare to Pinterest
Labels: Reviews