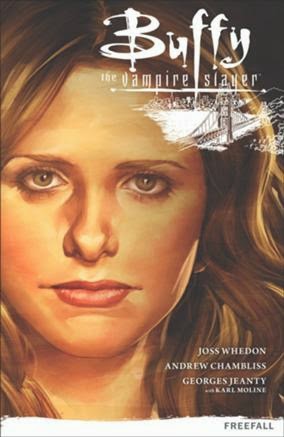 Volume 1 contains the first five issues of Season 9 proper, out of an anticipated total of twenty-five (not including the upcoming minis starring Willow and Spike or the concurrent Angel & Faith series). Issues 1-4 comprise the Freefall arc, scripted by Joss Whedon and Andrew Chambliss with pencils by series artist Georges Jeanty.

Here we see Buffy dealing with the aftermath of Season 8. The Seed has been destroyed, effectively eradicating magic from the world. Among other things, this means that vampires sired after that point (dubbed “zompires” by the gang) are feral and uncontrollable. Buffy also meets a mysterious stranger named Severin, who is draining the energy from zompires. All of that is well and good, but more importantly, Buffy is back to her roots, stabbing vamps in dark alleys while trying to make ends meet.

Gone are the large-scale operations of Season 8, replaced by more of the genuine heart and relationships that have always made the franchise great. After season 8 was finished, Joss Whedon admitted that while the it was an over-all success, they lost track of Buffy’s core in their excitement over not being limited by an effects budget.

Season 9‘s path is definitely reflective of this understanding. The first issue really sealed this with its humorous perspective on Buffy’s personal life. There’s even an “in” joke referencing the fourth season episode The Initiative, in which Spike tries to bite Willow and finds he can’t perform.

The fifth issue in this volume is the one-shot Slayer Interrupted, scripted again by Chambliss with pencils from Fray artist Karl Moline. Re-reading this issue, I noticed some hints at more recent revelations that didn’t register initially. Issue 5 also leads into Willow’s spin-off story, slated to kick off later this year. As if all that wasn’t enough, this collection also contains the short Magical Mystery Tour featuring the Beetles story scripted by the wonderful Jane Espenson.

This humorous and slightly bizarre story is a nice bit of icing on the cake for this collection. So if you’re a fan of the Buffy mythos, you’re going to want to buy this volume. It’s a great start to a very promising season for Buffy and the whole Scooby Gang!
Posted by John "Zanziber" Rogers at 6:00 AM
Email ThisBlogThis!Share to TwitterShare to FacebookShare to Pinterest
Labels: Reviews