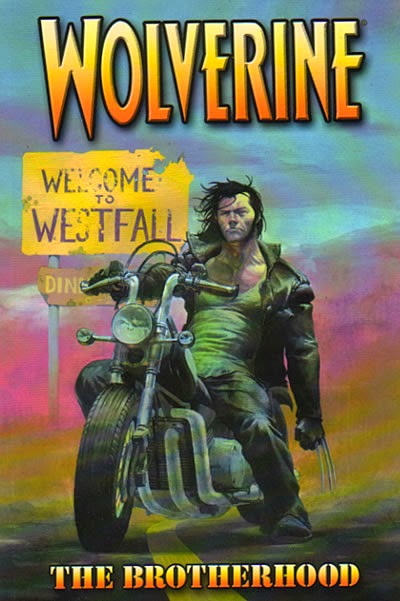 Wolverine, a brutish, surly loner, is the most interesting X-Man. Lucy, the teenaged waitress in the diner he frequents, nicknames him "Mean Man," but because she senses Wolverine is more sympathetic than he looks, suspects he has superhuman powers and knows she needs protection from the gun-toting, macho cult that's chasing her, she tentatively approaches him for help.

After Lucy is murdered, Wolverine pursues the killers into backwoods Oregon. This is basically a revenge-driven, tough-guy detective story, except that this vengeance-seeker's body repairs itself after terrible wounds and extrudes enormous claws before hand-to-hand combat. Wolverine's investigation parallels the work of ATF agent Cass Lathrop, who's also on the trail of the cult for firearms violations, and she can accomplish some things that he can't. But Wolverine (and readers) know that no authority can be trusted; besides, Wolverine's ability to slash a bad guy to bits is more satisfying to observe than Lathrop's professional approach.

In the first few stories, Robertson and Palmer's artwork emphasizes Wolverine's taciturn, Neanderthal nature. In the last chapter, however, they depict Wolverine letting his guard down in a bar full of other mutants, as he ponders what he's done and whether he's really human or just a talented, somewhat evolved beast. Rucka nicely scripts this discussion. In the same chapter, Lathrop has a dream that reveals her uncertainty as to whether she wants to arrest Wolverine or sleep with him. It's this ambivalent attitude by other people and by Wolverine himself that makes him so fascinating, and this book effectively maintains the tension.
Posted by John "Zanziber" Rogers at 6:00 AM
Email ThisBlogThis!Share to TwitterShare to FacebookShare to Pinterest
Labels: Reviews