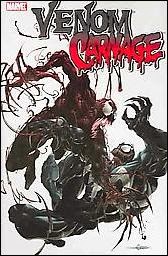 It's no secret that the Black Cat is one of my favorite Spider-Man character. I don't really have any kind of rational basis for this; it's probably just because I think she looks cool and she vaguely reminds me of Gwen Raiden from Angel, who I thought was equally awesome. So it shouldn't be a surprise that I'm constantly frustrated with what comic book artists do to her. There's actually no reason whatsoever for her to have been in Venom vs Carnage at all, and while added Black Cat is clearly a good thing, she really, really feels superfluous here.

And that's before you even take into account the fact that the artist has done some, er, creative re-imagining of her costume (she's wearing a skintight black catsuit already; how could you possibly feel any need to sex that up further?) and then completely forgot how to draw anatomy. It's not only the Cat that suffers from that last one, though - I desperately, desperately need to know what he did with Spider-Man's nose. It's creeping me out.

The good news, though, is that while Clayton Crain totally can't draw people, he can draw some pretty cool gloopy alien symbiotes. The fact that their anatomy doesn't have to be based on any kind of reality probably helps. Carnage, Venom, and indeed Toxin look properly weird, with fangy mouths, pumped up muscles and trailing squiggly bits falling off them, and though it's occasionally hard to tell what's going on in the symbiote battles, it usually looks stunning.

You might have noticed the mention of Toxin back there, and this book is about his origins. See, alien symbiotes reproduce in a slightly unusual way, and it's apparently time for Carnage to give birth. This new offspring, though, will be the 1,000th of the symbiote line, and while Venom wants to train it up, Carnage just wants to kill it. That's where the "vs" part of the title comes in, though Venom and Carnage don't spend all that long fighting each other, so it's maybe a bit of a misnomer.

Carnage's baby ends up bonding with a New York policeman to become Toxin, and then Spider-Man turns up to get involved with the fight. There's a bit of a story peeking through (if you think it's odd that I started off talking about the art before moving onto the story, you should take a look at this book, you'll see why) as Toxin and his human host struggle to come to terms with what they are and whether a normal life is possible any more, but it's soon back to flailing alien symbiote limbs again.

It's all kind of a mess. There's not enough story to make it worthwhile - and the dialogue is bloody dreadful - and the art is alternately very good and very bad, depending on whether there are people on the page or not, which isn't really a ringing endorsement. And... it's silly, but the childish part of me just wanted this to be a story about Venom and Carnage fighting one another. Like the cover image, only for a hundred pages. Ultimately, I can only conclude that this was a disappointment.
Posted by John "Zanziber" Rogers at 6:00 AM
Email ThisBlogThis!Share to TwitterShare to FacebookShare to Pinterest
Labels: Reviews