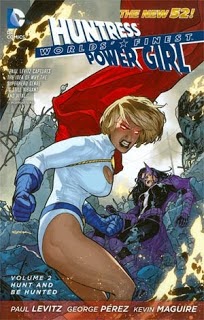 The book's first two chapters are essentially an excuse to put Huntress and Robin Damian Wayne on the same page, and they're likely the best of the book. Levitz could have gone the route of many writers when Damian guest-stars, positing Robin as a foul-mouthed kid who shows up or is shown up by the title character. Instead, Levitz digs deeper into this idea of Earth 2 as a parallel earth, to the point where Damian is nearly able to discern Huntress's origins solely by the similarities between their fighting styles during their initial tiff. The sequence is subtle and organic, and ought prove a good model for how other DC heroes might react when they finally meet their Earth 2 counterparts.

Supergirl/Power Girl team-ups have a reputation for the gratuitous (see Supergirl: Candor, for instance), but when Levitz parallel's Huntress's "not-brother" relationship with Damian against Power Girl's reluctance to reach out to her counterpart, it seems a potentially interesting meeting, indeed (it's coming, but I think in the Supergirl title and not under Levitz's pen). As I've said, I think Levitz "gets" this Power Girl and Huntress pretty well; Power Girl's statement late in the book is interesting that, while Huntress Helena Wayne had a debutante ball, Superman kept his Power Girl nee Supergirl hidden as a "secret" weapon, and that some of Power Girl's outlandishness now is a reaction to that. I'd be curious to see how much of this dissonance with her past factors into Power Girl's mixed feelings about "our" Supergirl now.

Hunt or Be Hunted gets a little wonky, however, around the point that Huntress and Damian track down Apokoliptian werewolves that happen to be regularly stealing money from Bruce Wayne -- why, we never find out, and ditto how this couldn't possibly have come to the attention of the Dark Knight himself. Each of the next four issues mainly involve a long fight scene -- Power Girl battles a dictator's forces before she captures the dictator; Huntress brawls with armored troops before she discovers they're supposedly working for Michael "Mister Terrific" Holt; Huntress breaks into Holt's offices twice and fends off his security both times, only to find that Holt is seemingly alive (while readers know he's actually marooned on Earth 2), something that's apparently public knowledge since "Holt" is participating a tech convention. The action, as in the first volume, isn't an end to itself that forwards the plot; instead it simply fills pages from revelation to revelation in the book.

The scene in which Huntress mourns Damian's death-between-the-pages in Batman, Inc. is moving enough, and Levitz uses well the fact that Damian is essentially Huntress's first "Earth 1 friend." The book does ramp up at the first mention of Holt, since again readers know Holt is on Earth 2 and so a storyline about him will likely have larger implications than just for the Worlds' Finest title (though Levitz shoehorning everything from the first volume's villain Hakkou to the werewolves to the gun-smugglers, etc. all to "Holt" stretches the bounds of sense more than a little). When Levitz finally reveals the faux-Holt as New God Desaad, Worlds' Finest only with its twelfth issue finally seems to be getting to its point. Learning more about the New 52 Desaad is enough to entice me to pick up the next volume, but I feel sure Levitz could have reached the same place in considerably less time or at least with more intrigue.

Artist Kevin Maguire, of Justice League International fame, presents himself well as always, especially on those aforementioned initial Damian issues; modern coloring helps to enhance the nice roundness of Maguire's lines. Equally legendary artist George Perez doesn't fare as well in the book, inked first by Maguire such that Perez's lines seem too dark, and later also by Phil Jimenez (no slouch either), whose style would seem to go well with Perez's but also emerges too dark. Toward the end the book takes on a bevy of fill-in artists, both well-known and not, and while no style is grossly different than another, it contributes to the sense of the book not hitting its marks when the art seems to be coming together piecemeal.

I recalled my ambivalence about the first volume of this title when I started reading Worlds' Finest Vol. 2: Hunt and Be Hunted, and I hoped that the second volume might impress me more when the first one didn't. Unfortunately, the second volume is more of the same -- good characters but a plot that mostly spins its wheels with only the occasional movement. The rub is that the cliffhanger in this one is enticing enough to keep going, but I'll probably be slower to grab the next volume of Worlds' Finest than I was this one.
Posted by John "Zanziber" Rogers at 6:00 AM
Email ThisBlogThis!Share to TwitterShare to FacebookShare to Pinterest
Labels: Reviews