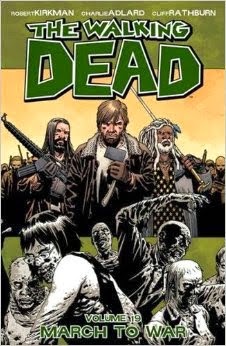 The world we knew is gone. The world of commerce and frivolous necessity has been replaced by a world of survival and responsibility. An epidemic of apocalyptic proportions has swept the globe, causing the dead to rise and feed on the living. In a matter of months society has crumbled: no government, no grocery stores, no mail delivery, no cable TV. In a world ruled by the dead, the survivors are forced to finally start living. Rick. Ezekiel. Gregory. Negan. Each man holds the fate of their community in their hands... and WAR is on the horizon!

Rick and his crew are mourning the death of Glenn. Especially Maggie who has decided to stay on the Hilltop. Rick being Rick refuses to take it laying down and has joined forces with Jesus from the Hilltop and Ezekiel with the tiger. Yes the tiger.

This installment was overall really good. I enjoyed the interaction between Michonne and Ezekiel. It is nice to see that Michonne has a softer side. She is human and sometimes Rick forgets that as he forces her to pick up her sword once again to kill for him.

I respect Carl more and more after every single volume. He continues to prove how important he is to the crew. He may have pissed of Neegan but he basically showed everyone that Neegan can be easily affected. Carl is such a pivotal character and I am mad that they water him down so much on the show. But I digress, the novel was beautifully illustrated as usual. Seeing the death of so many characters and Andrea come so close to dying really brings Rick to the point that it is truly time to destroy Neegan.

The story ends on a cliff hanger as they are finally going to go to war. I really thought this novel would have the actual war but sadly we will not see the true war until the next volume, Vol. 20 All Out War Pt 1. The fact that it is a part one makes me concerned with how many people will walk away from this one. The original group only contains Rick, Carl, Maggie, and Michonne.
Posted by John "Zanziber" Rogers at 6:00 AM
Email ThisBlogThis!Share to TwitterShare to FacebookShare to Pinterest
Labels: Reviews