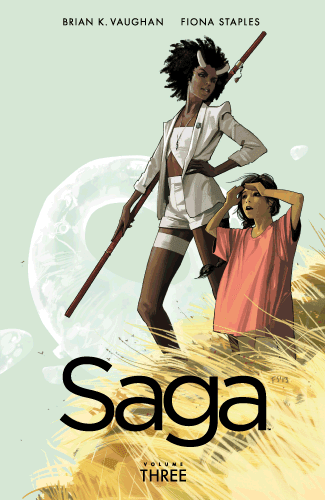 What else is there to say about scribe Brian K. Vaughan’s and artist Fiona Staples’ Saga that hasn’t been said before? It’s great and you should be reading it. Period. At this point, the only major dispute regarding its quality comes when people argue whether or not an issue is great or merely really good.

But in all seriousness, few ongoing comics thoroughly hold readers in such rapt attention, dying to get their hands on the next installment. With the release of the series’ third volume, Vaughan and Staples show no signs of a slump and, what’s more, this collection finds them augmenting the world with dangerous new locales and intriguing characters.

The bulk of this latest storyline takes place primarily on planet Quietus, where fugitive family Alana, Marko and baby Hazel arrive to seek out D. Oswald Heist, author of the trashy novel/subversive manifesto that inspired the pair’s coupling and subsequent run from the law. Along with Marko’s recently widowed mother Klara and ghost babysitter Izabel, the group takes some time to debrief after the pandemonium of the previous arc.

Saga Volume 3 is less frantic than Volume 2, which frequently darted back and forth in time to provide various slivers of background information. If the third volume contains any kind of ongoing throughline, it comes with the introduction of Upsher and Doff, a pair of journalists investigating the “kidnapping” of Alana. The more the two interview those associated with Alana, however, the more it becomes obvious that the former soldier/renegade mother left of her own accord, despite what the government says. It’s a nice sci-fi take on an All the President’s Men type storyline, albeit if Woodward and Bernstein were also gay alien lovers.

Meanwhile, a secondary storyline follows hitman The Will as he travels alongside Marko’s ex-fiancée, Gwendolyn, and a newly-freed child sex slave who the two rescued from a sex tourism planet. The trio arrives on a new world where The Will is visited, Gaius Baltar/Number Six-style, by a vision of his deceased arachnoid lover, The Stalk. All the while, he, Gwendolyn and the slave girl (dubbed Sophie) inevitably become an awkward surrogate family. It’s only here that the story somewhat stumbles. Toward the end of the trade, Gwendolyn mentions how The Will is “the man I love,” yet ultimately their relationship never feels developed enough to justify a romance, nor the delivery of such a strong statement.

This nitpick aside, it’s truly incredible how, in less than 20 issues, Vaughan and Staples have thoroughly crafted a massive alternate world that’s, at once, unquestionably and bizarrely alien yet still hilariously parallels our own. It’s the type of universe where people can have horns, wings or a single eye, but items such as laundry machines and board games are still widely used. In one of the volume’s funnier moments, Upsher and Doff come face-to-face with an assassin who poisons them. When they ask why she (and her badass dog) didn’t merely slit their throats, the assassin responds, “The only journalists that deserve killing are sports writers.”

Saga’s predilection toward wanderlust and fun is matched only by its moments of heartbreaking drama. The previous volume saw the introduction and development of Barr, Marko’s kindly father, only to witness him pass away in one of the series’ most devastating climaxes to date. This volume sees both the abrupt death of one beloved character and the severe crippling of another. It’s Vaughan’s own way of saying that, despite the occasional flippant tone that the characters take, this is still a dangerous world, and no one — not even our central couple — is safe.
Posted by John "Zanziber" Rogers at 6:00 AM
Email ThisBlogThis!Share to TwitterShare to FacebookShare to Pinterest
Labels: Reviews