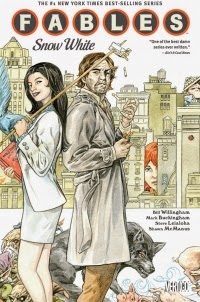 Bill Willingham gives us another installment of his nigh-legendary series in Fables, Vol. 19. Before this trade paperback continues the story of the exiled “Fables” in Fabletown, NY, the first third of this edition features the collected back-up stories of Bufkin, the flying monkey with no wings and Lily, his miniature-sized girlfriend.

The collected back-up stories are illustrated by Shawn McManus. His slightly-cartoonish style works well for Bufkin’s revolution in Oz. Couple that with Willingham’s writing, and this self-contained story masterfully transitions from a revolutionary war against a tyrant, into an adventurous love story that follows the odd-couple of Bufkin and Lily until their beautiful end.

I found myself wanting to read more about the duo as their story came to a fitting conclusion. If this edition of Fables only contained this story, I would have been satisfied!

The second two-thirds returns us to the ongoing story of Fabletown. The “Snow White” story-arc finds Bigby (Big Bad Wolf) leaving town in a mystic car to try and find his and Snow White’s lost cubs. Snow White is not able to grieve for long, however, because a mysterious intruder in Castle Dark threatens to destroy her marriage to Bigby.

This story takes quite a bit of time to take off. After the emotional story of Bufkin and Lily, I found myself not caring too much about the lost children and mysterious interloper in Castle Dark.

But (and that’s a huge “but”), as series artist Mark Buckingham’s very grounded art style melds with Willingham’s tale, I found myself gripped with the struggle that was unfolding. I was sucked into the lives of the characters and I’m not sure when that happened. (I went back and looked too!)
Posted by John "Zanziber" Rogers at 6:00 AM
Email ThisBlogThis!Share to TwitterShare to FacebookShare to Pinterest
Labels: Reviews