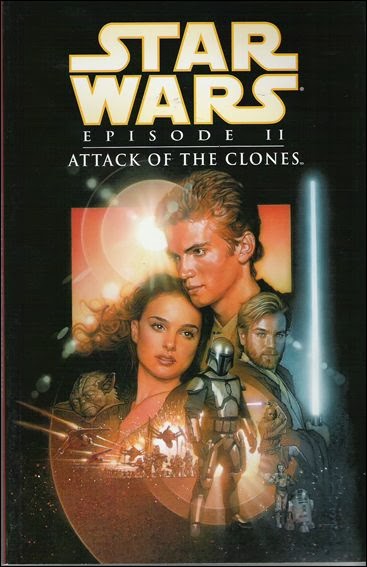 It's a fairly straight forward, faithful translation of the movie to comics, with not too much left out for space reasons...but, there's nothing much added, either. Obviously, when you read an adaptation of a movie, you want it to stay true to the movie, but sometimes it can be nice to get an "expanded" version, either by including extra scenes, or using richer, more textured text captions to add nuances, or introspection.

Funnily, when I first reviewed this, I commented that action scenes were truncated -- which I suppose is true compared to how action-heavy the movie was. But re-reading this recently (and immediately on the heels of re-reading the Phantom Menace adaptation, in which the talky scenes were most definitely emphasized over the action) I'd almost make the opposite complaint: the action scenes and fights go on too long, consuming series of pages. And though they might be exciting in a live action movie, in a comic (where the action is often a bit hard to follow) they can just feel over-long and unexciting.

The notion of text captions have largely fallen out of favor with modern comics practitioners, preferring a straight cinematic style of comic storytelling to one with a toe still in a literary stream. But here, writer Gilroy does in fact employ captions... quite a bit. But it's generally there just to clarify a scene or an action ("Landing on the Reek's back, Anakin takes control of the beast.") Although that's welcome when the scene is otherwise muddled, it also means the captions tend to be rather flatly written, as if Gilroy includes them as a necessary evil, rather than because he was putting any effort into crafting them. Indeed, it can often feel like heavy handed captions to a children's picture book, as opposed to passages told with literary flourish, meant to give us insight into a scene and the emotions.

Ironically, even with these purely serviceable captions, some of the action scenes still remain confusingly staged if you haven't seen the movie for a while (as I hadn't when I read this). How much that lies with the script, the artist's composition, or just the trickiness of trying to recreate cinematic action in still panels, I'm not sure. I suspect each contributes its own flaws.

The art by Jan Duursema (no stranger to Star Wars as I think she even drew some comics back when Marvel published the comics) is solid enough, and with Ray Kryssing's inks, and the brooding colors, tends to try for a bit more sombre mood than did the movie. Of course, doing a visual adaptation of a movie/TV show can be tricky, as there tends to be a lot of talking heads and people just standing around stiffly. But though the art is decent, it can also be a bit undynamic. She does a decent enough job evoking the actors...with the exception maybe being Natalie Portman (perhaps a reflection of the fact that Portman's features tend to be, I dunno, unblemished for lack of a better word -- an artist can't exactly emphasize distinctive lines or creases because she doesn't really have any).

Interestingly, although the art is in many respects more detailed than the art employed in The Phantom Menace, I think I found the simpler style in that earlier adaptation more appealing.

But, ultimately, I'm not quite sure how to review this -- it was faithful to the material and competently drawn. But, I'll admit, it didn't fully hold my interest. That may be a problem with the adaptation but, I suspect, it's also a problem with the source material. I tend to be a Star Wars fan...who tends to like the idea of the Star Wars movies more than I do some of the movies themselves. In fact, the story in the comic picks up during the sequence when Obi Wan is investigating and goes to the clone planet...precisely where I recall finding the movie becoming more intriguing, as a "plot" began to emerge. But in both versions, it's a fairly brief interlude.

Despite this "mystery", and the potential for emotional drama in the blossoming romance, I recollect this as the weakest of the three prequel movies...perhaps explaining why this is the least compelling of the three comic book adaptations.

Bottom line: a competent, but perhaps uninspired translation of the movie.
Posted by John "Zanziber" Rogers at 6:00 AM
Email ThisBlogThis!Share to TwitterShare to FacebookShare to Pinterest
Labels: Reviews