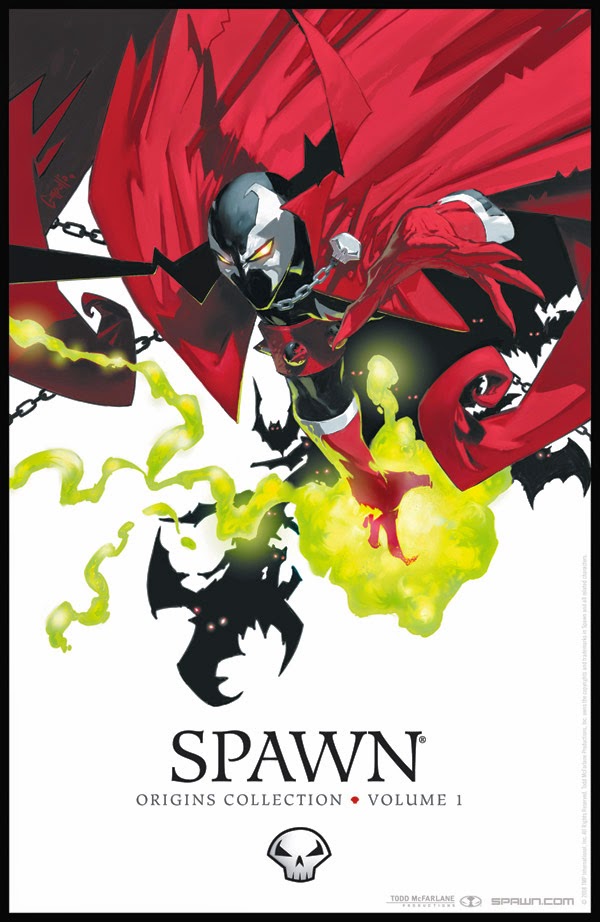 Taking us back to the earliest days of one of the most important superheroes in recent memory, Spawn Origins Collection Volume 1 shows us a comic very much in its developing stage, trying to figure out what it wants to do and how to go about doing it. The six issues presented here widely vary in quality, from the fantastic Justice to the wretched Payback, but serve as an excellent time machine if nothing else. For all its flaws, Volume 1 is a great trip back through time showcasing enough of Spawn's potential to be an enjoyable, if not overwhelmingly great read.

Spawn is shown to be a sympathetic man trapped in an undesirable situation due to his love for his wife and a bad deal with (literally) the devil. We spend this comic getting to know him, and this, along with his frequent interactions with the Violator, a shapeshifting fiend capable of ripping the hearts out of his victims, form the core developments for the first arc of this book, a four part storyline entitled Questions. We are also introduced to Sam and Twitch, two unorthodox police detectives who will likely end up serving as Spawn's version of Commissioner Jim Gordon sometime in the next few issues. They are working on many of the same things as Spawn in this comic, but the two entities have only brief contact. They also provide some of the only enjoyable banter in the entire book. Unfortunately, for as intriguing as Spawn is and as solid as the Sam and Twitch duo are, they can't salvage a mediocre opening arc that can't quite figure out where it wants to take the character and what kind of tone to set.

In the Questions arc, we see many of the problems that lead to this identity crisis in the early Spawn comics. This gruesome and dark story is undercut by villains who talk in ridiculous rhymes, cheesy and totally unoriginal catchphrases being shouted at one another during any kind of combat, and a mildly unsatisfying story that sees Spawn lamenting the fact that he is only able to take human form as a white male, among other things. Spawn, formerly an African American named Al Simmons, travels to the house of his widowed wife to see what she has been up to for the last six years. The whole incident of Spawn in "whiteface" is totally laughable (more for the writing than the concept-Spawn makes plenty of coy comments about his true identity when interacting with his former family that felt totally out of place) when it should have been the perfect opportunity to really give this character a tragic back story. He is still a very tragic figure, but this scene represented an enormous opportunity lost in making the character even better.

That doesn't mean that everything is bad though. The Violator has his moments of awe inspiring power, the problem is that he should just shut up and demonstrate them. Additionally, Spawn has plenty of mysterious elements to his origin and former life at this stage that will serve as good fodder for future episodes and help to give him some depth that the angst ridden script otherwise fails to provide. The addition of the power clock quandary, the use of Spawn's powers brings him that much closer to a second death, also leads to a very interesting moral dilemma, though he will likely find a permanent solution to it sooner rather than later. Other than that though, this is a comic that can't figure out if it wasn't to be a gritty, quasi-Biblical series not dissimilar to Batman or a more light hearted and fun comic with lots of catchphrases and a hero that is more style than substance, and the overall quality matches this.

Rounding out the collection are two less crucial stories that give us a feel for Spawn's ongoing struggle to cope with his powers and new life. First up is the highlight of the collection, "Justice," that deals with Billy Kincaid, a child murderer newly released from prison. Kincaid is an incredibly simplistic, possibly mentally disabled character, but the questions that he stirs in both Spawn and Sam and Twitch make this comic an excellent example of what this series could be. His release causes many people to question what justice and the law really mean, and Spawn of course has a personal connection to the case with his wife's daughter at potential risk for being dismembered and glued to a wall. Kincaid isn't a terribly difficult character to hate, but a particularly disgusting scene where he murders a young girl then severs her fingers manages to do the job quite nicely. This is quite a shocking scene that definitely pushes the comic more towards the mature and gritty, so in that regard this issue works wonderfully to start to set the tone for the series to come. After some deliberation and careful hunting, Spawn finally gives the killer his comeuppance in a thoroughly satisfying way, and this issue marks the first time that Spawn truly feels like a comic with potential.

The follow up, part one of an arc known as Payback, is an abysmal story that definitely shows its age. In this book, the mob in New York suspects Spawn of being the murderer responsible for ripping out the hearts of many of their crime bosses. To this end, they hire a Sicilian cyborg named Overt-Kill to track down Spawn and kill him. Overt-Kill has a cringe worthy design straight out of the worst comics of the 90s. Lots of shiny, sharp angles to his suit, a cheesy cybernetic eye, and enormous guns make this character feel like something out of an X-men comic or something....he just does not fit into what the Spawn series has been doing thus far and with the way this comic ends, with Spawn stocking up on huge weapons of his own, I'm sure we will see more terrible shootouts between these two in the next volume.
This is the villain in the Payback arc.

The artwork, much like the rest of the story, suffers mightily from an identity crisis. While the story calls for copious amounts of blood, horrifying underworld figures, and a hideously scarred protagonist in a beaten down city, the coloring couldn't tell a more different story. Though most of the cityscape shots are darker and definitely akin to something straight out of Gotham City, particularly in the Payback arc, most other things aren't. Many of the interiors are incredibly bright, and characters are colored with an often unyielding degree of brightness (Spawn being the exception to this rule, of course.) Satan is colored in a near blinding white-yellow color with lots of similarly colored flames surrounding him, a design far too bright for the usual imagery associated with hell, and too light for a character supposed to be the supreme bad guy of this book. Spawn looks pretty good in most panels, with his iconic costume being colored quite vibrantly, but other than that and some decent coloring on the gory stuff, this book is quite sub-par where colors are concerned.

On the other hand, the pencils are quite nice. There is a fantastic amount of detail packed in to this book, and though it isn't the most intricate comic ever conceived, it certainly gets the job done in this crucial department. Every page is packed with detail and although this does occasional lead to pages that are a bit disorganized and poorly planned, this book is a fine example of Todd McFarlane's prowess with the pen. There are a few uneven moments here too: characters are sometimes given comically exaggerated expressions, and the battle scenes are more often than not a complete mess, but Spawn's iconic design is almost worth the price of admission alone.

One last note on the art though is the often overlooked but quite important feature that is typically pointed out only when it is done wrong: the lettering. This book is no exception, as for some reason the letters are all over the place in terms of style. Underlined letters, blue font, red font, bloody lettering,  this book is a mish mash of various font styles and worst of all, it is near impossible to figure out what most of them are supposed to represent. What does blue font even signify? How is an underlined word any different from a bold or all caps one? The lettering was just a bit too gaudy for my tastes and felt like someone experimenting with fonts for the very first time.

Even though this is a very mixed comic, this is something that pretty much every comic book fan should at least thumb through or be aware of. Spawn is a crucial series in the history of comic books, being one of the first indie titles to make it big, reinventing the action figure/sculpture game, and becoming the epitome of cool during the mid to late '90s. Additionally, the presentation in the Origins collection is top notch with a few insightful forewords, a cover gallery, and a few preliminary sketches all printed on high quality paper.
Posted by John "Zanziber" Rogers at 6:00 AM
Email ThisBlogThis!Share to TwitterShare to FacebookShare to Pinterest
Labels: Reviews