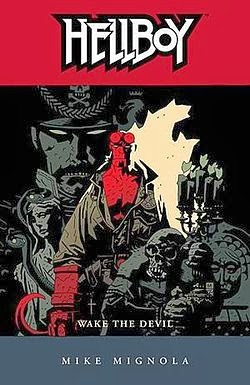 Wake the Devil collects the second major Hellboy story -- a five issue mini-series. And is the second trade in the Hellboy collection. Though that's rather problematic, as in between the first mini-series, Seed of Destruction, and this, were a couple of short stories and one shots, which this story makes passing reference to...but for page count reasons don't get reprinted until the third Hellboy trade volume!

The wholly original aspect of the story is that Hellboy and the Bureau of Paranormal Research and Defense investigate a murder at a curio shop that seems to involve the stealing of the corpse of one Vladimir Giurescu -- a man whose legend dates back to the Napoleonic wars and was rumored to be a vampire. Possibly even the inspiration for Dracula. So Hellboy and friends head off to Romania to investigate and, if necessary, prevent Giurescu's resurrection, the group splitting up to seek out different likely spots, with Hellboy alone coming upon the dead nobleman's castle.

How this ties into the previous tales is that the theft of Giurescu's body was performed by the same cabal of ex-Nazis whose occult ambitions first resulted in Hellboy coming to earth -- a cabal led by the resurrected Rasputin, still determined to use Hellboy to bring about the apocalypse. As such, there are characters running about, and cryptic references, that will have greater resonance if you've read the previous tales.

At the same time, a lot is explained as you go...and still more, part of the mood of Hellboy is its very obliqueness. The series' appeal is that Mignola isn't just some guy who developed his love of horror and dark fantasy from Stephen King novels and Hammer horror films, but a guy clearly well versed in the real thing -- ancient legends, myths and fairytales. And Hellboy is steeped in that sense of folklore and fairy tale, of interventionist god-like beings, all combining for a certain dreamlike ambiance, where not everything has a rational explanation. Yet it holds together well enough that it doesn't just feel like lazy storytelling by a guy unable to put his imagery into a coherent pattern. Indeed, when you reach the end of the tale, Hellboy even remarks he's not sure what happened, that he "was right in the middle of things, and I think I only saw the tip of the iceberg". Yet the reader actually has a better grasp of what transpired, because we were privy to scenes and conversations Hellboy wasn't.

At the same time, there is a sense the story kind of wandered away with itself -- or was dragged in a different direction (Mignola acknowledges as much in an afterward). Giurescu, which is what/who the story seemed to be about, kind of gets sidelined into being a secondary plot as Rasputin and his plans for the apocalypse retake center stage. Mignola remarks this was his most ambitious project (at least, at that point) and if all the threads and characters don't fully coalesce into a natural whole, that very complexity adds to the enjoyment while reading, justifying the five issues and keeping you turning the pages, cutting from one agenda to another, one set of characters to another.

And, of course, a huge appeal of the Hellboy stories is Mignola's art -- craggy and deceptively simplistic in a way, yet astonishing in the mood and environments he can evoke with just a few lines, a few brush strokes. Artfully rendered with thick, spooky shadows, and often deadpan characters (kind of evoking the low-key tone of TV's The X-Files). Hellboy's adventures take place against deliberately traditional, gothic environments, such as here, much of the action taking place in a deserted European castle -- or in the seemingly cathedralesque caverns beneath the castle (a recurring trick in Hellboy stories is floors caving in depositing the characters in subterranean caverns). And he captures an almost cinematic language by cutting away to close-ups of statuary or fresco's, that add to the sense of mood, and place -- and slow building tension, as if even the inanimate is sentient.

Mignola's writing isn't maybe terribly heavy on the angst or emotion (unlike the motion picture) yet nonetheless does nicely capture personalities and a sense of camaraderie and relationships, with even the villains having some nuance, different agendas and personalities. His writing is good -- not always realistic, deliberately so, by evoking a folkloric feel as otherworldly creatures utter cryptic pronouncements. Some of the exchanges between Rasputin and his followers are deliberately evocative of Biblical conversations between Jesus and his disciples -- sacrilegious? Maybe, but not really. It just further adds to a sense of resonance, and of apocalyptic grandeur, Rasputin the dark priest of his own religion.

Yet there's also some nice, human exchanges, and witty -- if very deadpan -- quips and dry observations.

And, of course, with all the mood, the creeping horror, this is still a comic book about a red skinned demon paranormal investigator, so there are also comic book-style action scenes, and smashing through walls!

Wake the Devil is a thoroughly effective installment in the Hellboy saga (even the title has multiple meanings), but though readable on its own, ideally isn't the best volume to start with, evolving as it does from Seed of Destruction. Indeed, though both sagas tell their own story, they also form a combined epic (a sense further emphasized because the 2003 movie essentially combined scenes and ideas from both mini-series into a single story). And since Rasputin and the Nazis don't really recur for a while, there's a greater sense of temporary closure to the themes as well (even if there are a few -- minor -- dangling bits, like a sequence involving a homunculus!)
Posted by John "Zanziber" Rogers at 6:00 AM
Email ThisBlogThis!Share to TwitterShare to FacebookShare to Pinterest
Labels: Reviews