Hellboy: The Chained Coffin and Others 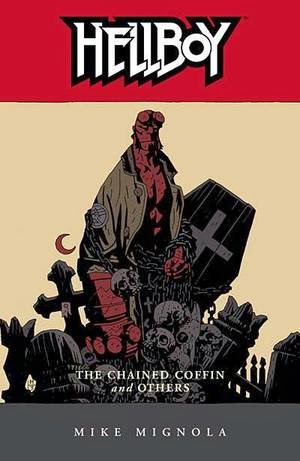 Title: Hellboy: The Chained Coffin and Others

There's something weirdly undiscrimnatory about the Hellboy trades I've read. That is, if I were to read five Batman trades, or Spider-Man, I'd expect some good ones, and some not-so-good ones. Yet with Hellboy, I'll admit -- I tend to like them all. I liked them after a first reading, and enjoyed them even more after a second (more forgiving of any flaws).

With that being said, if you were looking for a good sampler/starter trade of Hellboy, The Chained Coffin and Others is probably a good nominee. Many of the Hellboy trades collect single, long form stories, originally published as mini-series. Whereas The Chained Coffin is one of a few that collect a variety of stories between a single cover, which is why it makes a nice sampler. And the variety allows for different tones and feels.

The longest piece was first published as a two issue mini-series, "Almost Colossus", and stands out as a particularly strong tale. Though it follows on the heels of a sub-plot in the previous trade -- Wake the Devil -- it still is reasonably self-contained. Hellboy's colleague, Liz Sherman, is in a semi-coma after essentially having her life force stolen to reanimate a homunculus, and Hellboy and Kate Corrigian scour the Romanian countryside trying to capture the creature -- unaware another, more sinister presence also seeks the wayward homunculus. I'd commented before that both the strength, and the short coming, of Mignola's writing/art is a certain deadpan style, eschewing the more obvious emotion of the motion picture. Yet here he seems to have mastered that low-key style, so that there's actually some powerful, deep emotional undercurrents, even as it's handled in a quiet, unobtrusive way. Scenes of Abe Sapian standing vigil by Liz's hospital room are quite touching. And the homunculus is given more depth and sympathy than as simply the monster of the week.

Because of its length, Almost Colossus acts as the center piece of the collection, and harkens to the long form stories fans are accustomed to from the longer Hellboy mini-series.

Yet almost as long is the moody, spooky one-shot, "Wolves of St. August", and there are some other "feature length" (ie: comic book length) tales, such as "The Corpse" and "Christmas Underground", as well as some tasty little short pieces, including the title story, "The Chained Coffin" which, given its length (10 pgs.) might seem an odd choice for the title...but is significant as it shines some light on Hellboy's murky origin.

Part of the appeal of Mignola's writing is that he doesn't just write a quirky horror series inspired by the latest cinematic scare fest. Rather, Mignola is clearly a student of traditional folklore and legends, steeping Hellboy in a tone and style that is actually quite different from the average 20th/21st Century pop horror series. And that becomes even more explicit here than in the earlier tradess, as in his various commentaries introducing the stories, Mignola frequently alludes to the actual folk tales that inspired the stories, how some stories he had wanted to adapt for years (presumably before he'd even created Hellboy) while with others he set out to write a Hellboy story, and searched around for a folk tale to provide inspiration.

As such, there is often a dreamlike sense to the Hellboy stories, where logic can be rather tenuous. Yet instead of just seeming like a narratively confused mess, it adds to the richness, the sense of ineffability. Partly because it does seem so evocative of the logic and narrative rhythm of folk tales. Yet with all that being said, the stories do generally hold together -- I don't want to leave the impression they don't. It's more in the little asides that there is a certain surrealism...the way skeletons will offer warnings, unbidden, or animals will start speaking, as though in a dream.

Of course, much of the success of the series is that it's all about the mood, which is why the dreamlike narrative flow suits the stories. You open a Hellboy story and it's like your slipping into a vivid dream, rich in mood and atmosphere. And an enormous part of that is Mignola's art, which is almost breathtaking in his ability to evoke a sense of place, of gothic castles and lonely, midnight draped open fields, all with some deceptively simple line work. And it's all wrapped in deep shadows, adding to the sense of spookiness...yet also adding a comforting warmth, strangely enough. In all this he's aided by the colors, which with a penchant toward sombre hues and earth tones captures the sense of darkness, without going overboard and making it just visually dull and murky. And by contrast, we have the bright read Hellboy at the center of it, fairly glowing like a stained glass portrait.

It's all a little creepy and scary, sure, but it's also fun and inviting.

After all, in addition to the scary stuff, the creeping mood, the portentous utterings of otherworldly beings -- there is a nice contrast with Hellboy's deadpan wisecracks, and his gruff but good-hearted phlegmaticness dealing with things he's seen before. In The Wolves of St. August, when asked if he's seen anything like it before...he casually rattles off a series of previous incidents. And part of the humor of Hellboy is precisely that his comebacks and wisecracks can be lame, making them funnier in the context, calling monsters, "you horrible thing!" It's funny precisely because he doesn't always have the perfect retort waiting on his tongue.

Hellboy is long lived, and the Bureau of Paranormal Research and Defense, though a US organization, seems to operate globally, so in a collection like this Mignola can play up that, as the stories take place in various locales, and various times (from 1961 to 1994) -- not that it's necessary to the narratives, but adds to the sense of filling in the holes in Hellboy's exploits.

In addition to Almost Colossus, probably the best of the tales here is The Corpse, in which Hellboy must find a final burial place for an animated corpse, yet being turned away at every likely spot. Inspired by a real Irish folk tale, it's a story where the very minimalism of the premise adds to the elegance of the narrative, mixing a spooky darkness, with the humor of Hellboy's nonchalance. And even a kind of melancholy ambivalence, as the story involves Hellboy bargaining to rescue a human baby from fairies, but once this is accomplished, a fairy tells him the age of the fairies is almost gone, leaving the reader with a certain melancholy, as the "monsters" become more sympathetic.

Wolves of St. August is also memorable. Though, admittedly, a lot of the climaxes to the stories can be just big fight scenes, rather than anything that clever -- Hellboy just tougher than his opponents.

Some of the stories are maybe little more than fillers. But as a collection, a sample of Hellboy, with some long, well plotted pieces, with shorter, mood-heavy vignettes, it's a nice tome to have. And though making some references to other Hellboy adventures, overall it is among the most cleanly self-contained of the trades.
Posted by John "Zanziber" Rogers at 6:00 AM
Email ThisBlogThis!Share to TwitterShare to FacebookShare to Pinterest
Labels: Reviews