Batman Vol. 1: The Court of Owls 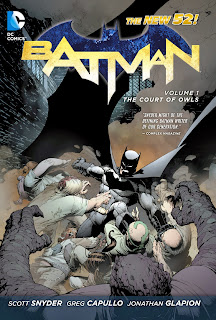 Batman: The Court of Owls is a deconstruction of Batman and Bruce Wayne’s vision of Gotham City. The DC Relaunch provided a landscape in which writers and artists had a way to completely recreate characters and the DC Universe as a whole into their vision. Scott Snyder doesn’t exactly do this. The Court of Owls works as both a perfect starting place for new readers to comics as well as experienced readers who have kept up through the Grant Morrison saga and Snyder’s work on Detective Comics. Characters created and explored during that time period are even featured in the opening pages of this book, so it’s not a title that completely ignores its past, which, whether on purpose or not, parallels the concept of this book. And this book is quite simply a masterpiece.

In Court of Owls, Scott Snyder tells a story of how the past of Gotham City, a past unbeknownst to The Batman, has come to haunt The Dark Knight in a way that no one, other than Snyder, could have ever imagined.

Batman has come back to the cape and cowl after being thrown through the time stream in Return of Bruce Wayne and recent excursions across the globe with Batman Incorporated, and has made his triumphant return to Gotham City. With the brighter, more positive attitude that accompanied recent events, Bruce Wayne and Batman look to the future as a way of turning away from the shroud of darkness that has been covering his city for so long, a future that expands and grows the city to new levels. Unfortunately for The Batman, things aren’t as easy as he would have hoped when he discovers that the oft-whispered name of The Owls comes to be more of a reality than an urban legend, and they are after Bruce Wayne.

Scott Snyder is one of the handful of writers who truly knows Batman. He’s in love with the character, and you can completely tell that this is a story that he’s wanted to write for quite some time. While the theme of Gotham being darker and haunted by something that Bruce is unaware of, I can’t recall a storyline in which it’s explored that Batman ultimately has no control over the fate of Gotham City, and while I’m sure that, ultimately, Batman will save the day and come out on top, that’s definitely not how it feels in this comic. In this comic, Batman is taken to the depths of the city and is shown the power of The Court of Owls. Bruce Wayne is led to believe that those in his inner circle have betrayed him, which drives Wayne to the point of questioning every single motive of those to whom he is close. Snyder does an excellent job of building Batman up to a state that we haven’t seen lately as a quiet and reserved, yet powerful character to a point where he cracks and is placed in a weakened, vulnerable state. And that’s where the key to Snyder’s story is – character work.

As I said earlier, Snyder knows Batman. Snyder has the voice of both Wayne and Batman down to a science. In Court of Owls, he manages to nail the recent, lighter characterization in Batman Incorporated while also incorporating the Batman of Hush, No Man’s Land, and Batman Year One. The detective aspect of Batman is also here because Snyder writes an incredible mystery. Pages are constantly turned when Batman discovers the DNA of a killer who has struck Gotham, which is revealed at the end of the first issue, but that’s only the start of it. Clues start popping up as to the whys, hows, and whos of The Owls that have controlled Gotham City for so long, and it’s on par with any great mystery comic out there. As a single volume story, though, it doesn’t work for me.

That’s not to say that this volume doesn’t work at all, however, because it absolutely does. Batman starts off strong as a character, is faced with a terrible situation, adjusts his mentality and drive, and ultimately comes out the victor, which is how a comic book story arc should play out. It’s just impossible to look at this volume as anything more than a segment of the grand plan which plays out through issues 8-11, so if you’re reading this book, you’re probably going to feel a little cheated that it’s not the whole thing. The comic ends with an incredibly dramatic moment which leads to a huge question mark in regards to one of Batman’s closest allies and a cliffhanger plagues the final pages of the volume, which is something I can’t stand with a collected edition. Because, when you’re buying a book like this, typically you expect some finality to the story that won’t make you want to wait until DC decides to collect the final part. You aren’t getting the entirety of the story, which is unfortunate, because in my opinion, you need the second half to truly appreciate the first.

While the writing is certainly enough to get someone to absolutely love this comic, I’d be remiss if I didn’t talk about the comic’s other half composed by penciler Greg Capullo, inker Jonathan Glapion, and colorist FCO. First and foremost, whenever is group works together, they bring the best out of each other, which is evidenced in books like Haunt, but more so within the pages of Batman. They have a chemistry that makes the entire comic feel like something special just by looking at it, which it is. Capullo has a kinetic energy to his pencils that makes the still images jump off the pages with movement that is as exciting as it is clean and beautiful, while the colors of FCO enhance the comic’s beauty. Where Glapion’s talent comes in, however, is with his heavy inks that set the dark tone and mood that Snyder is crafting with The Owls. And the way these two work together sums up the pace and story of The Court of Owls, it’s an action/adventure thrill ride that also lends itself to deeper thought with a looming darkness that constantly feels like it is about to strike.

Although I would prefer an oversized edition that collects the entirety of this team’s run, all of the creators truly work together to create a magic book that is absolutely worthy to be the first chapter of Batman in the new DC universe. I think it’s deserving of a future Absolute Edition, don’t you?
Posted by John "Zanziber" Rogers at 6:00 AM
Email ThisBlogThis!Share to TwitterShare to FacebookShare to Pinterest
Labels: Reviews