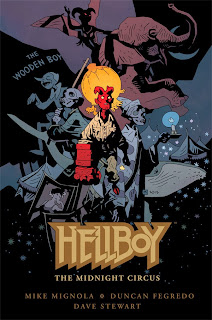 People rejoice, for the great team behind some impossibly great Hellboy stories are reunited for an original graphic novel. Indeed, Mike Mignola, Duncan Fegredo and Dave Stewart, those behind such stories as Hellboy: The Wild Hunt and The Storm and The Fury are back as they try to tell an original story featuring a much younger Hellboy, one with perhaps a tiny bit of innocence still left in him. While it may be particularly great for fans of the beast of the apocalypse, is it perhaps something that readers unaware of the mythos of the series might enjoy? More importantly, is it good?

It is my belief that the answer to both these questions would be in the positive, as Mignola is able to mix childlike sensitivities, a feeling of horror and the Hellboy mythos flawlessly without alienating any of these aspects in favor of the others.

Speaking about each of those aspects, the childlike sense of wonders comes directly from the point-of-view of the titular character, Hellboy himself. In this story, though, readers are treated to a much younger protagonist. Gone is the tough supernatural detective, replaced by a character much more akin to the younger self readers grew to love from stories such as Pancakes. The innocence of Hellboy is not only a particularly refreshing take on the character, but it is also what propels much of the story forward. His fears and his sense of wonders plays a huge part in the atmosphere of the story, magnifying everything as it passes right through the emotions of the character.

It is a blessing then that he is written very well, with a certain sense of mischief, of adventure and a desire to be part of something. Like a lot of children, Hellboy simply doesn’t know any better and gets in trouble, which is the highlight of the story as things he doesn’t understand begin to gravitate toward him. Despite his wishes and what he’d like to be, the story plays a huge part on developing certain traits of his. Being part excitable and gullible, it is a wonder to see him get excited about his favorite comic book, Lobster Johnson or when he is being attacked by monkeys and all sort of beasts in the circus. As the point-of-view for the horror and the marvels of this weird world created by Mike Mignola, the younger Hellboy works like a charm.

What also works very well is the much more horrific aspect of the tale. Playing with some of the more classical tropes of what people might attach in terms of fright to a circus, Mignola adds some other things of his own to the regular horrors connected with the concept. We do have the animals, the helpers and the like to rely upon for the fearful elements, but Mignola weaves in demons, illusions, crazy dreamscapes and some fables in his story that adds quite a lot in terms of concepts. Weaving in the mythology built around his character to the mix, Mignola does so without destroying the effects some of the elements may have on the readers. Fans might get a bit more from this story knowing who Astaroth is, but the key concepts around the character are clear enough for the non-initiated to be aware of just what kind of person he is.

Perhaps the only element that is weaker than the rest is the story itself, though, as it doesn’t accomplish much except perhaps add a bit of mythology for Mignola to use in the current Hellboy series. The general elements and the progression is fairly standard as far as plotting goes, with the story handled in the same manner as a child tale, which is part of its charm, yet it doesn’t do much in terms of complexity. It’s the classic tale of a child running away, only to learn the lesson that he shouldn’t have done so in the first place. The direct reference to Pinocchio is quite apt in the story itself, considering that angle, yet the strength of this graphic novel doesn’t lay in the basic plot behind it, but in its execution. There are a few twists here and there that fans of the Mignolaverse may get more of a kick out than other readers, but they aren’t exactly clear-cut in the narrative. They don’t retract anything, yet not everyone can exactly gets all the references. It’s strong work, yet not necessarily for the occasional readers.

The strongest aspect of this whole thing, though, is the art by Duncan Fegredo. In this graphic novel, he uses a good number of different styles, conveying a certain sense of wonder on one side with a more traditional Mignola approach on the other. The circus scenes have a different design, with the lines being a mix between Fegredo’s approach to storytelling and Mignola’s, with some unfinished lines combined with complete ones. There is also a certain opaque sense of details when dealing with the circus elements, enhancing the otherworldly sensation in the pages and panels dealing with this setting. The other style is much closer to the rougher, but also very fitting approach of Mike Mignola, with a certain focalization on rougher lines and shadows. The character designs, expressions and poses are all top-notch, with their reactions being very fitting for each new twists or concepts thrown in the story. The backgrounds, needless to say, are simply gorgeous as it becomes clear that this graphic novel took a lot of work from Fegredo. They are striking, memorable and full of life as close to none of them are lifeless, making the pages brimming with details without becoming chaotic or simply unfocused. Fegredo understand the strength of empty spaces in terms of storytelling, as he is able to balance things out in order to use them without making the pages look empty as well. The story flow is good, the panel sequencing is great and much of what is found there is good. This is an excellent display of Fegredo’s talent.

It is also a display of why Dave Stewart won a good number of Eisner awards, as the colorization fits the tone and the style in an excellent manner. Stewart use a vast number of colors to great effects, with most pages showing a different style to add to the marvellous aspects of the script. The invocation in the circus, the belly of the whale, the discovery of the circus, the hellish landscapes, the library scenes and a variety of others showcase a very different palette each time, creating a rich visual diversity that simply add so much to the tale. Contrasts are visible everywhere, enhancing the focus on certain elements, yet are done without brushing away other elements. It’s excellent work from Stewart, plain and simple.

Combining horror, a sense of child-like wonder with a subtle touch of Mignola’s own mythology, this graphic novel simply astounds on many levels, the strongest being the art of Duncan Fegredo and Dave Stewart, which can only be summarized as breathtaking. In simpler terms, it’s a beautiful and impossible strong piece of work from everyone involved.
Posted by John "Zanziber" Rogers at 6:00 AM
Email ThisBlogThis!Share to TwitterShare to FacebookShare to Pinterest
Labels: Reviews