Azrael: Angel in the Dark 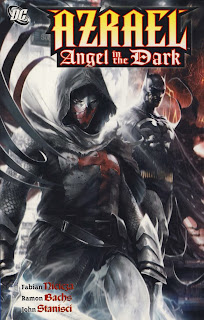 Title: Azrael: Angel in the Dark

Some people seem adamantly against superhero comics or characters touching on certain real-life issues in stories. For instance, Greg Rucka and Judd Winick are two writers who’ve caught flack in the past for telling stories involving gay characters and the persecution they sometimes face. Personally, I think it all depends on how you portray the issue, and whether you come off as preachy.

In Azrael: Angel in the Dark, Michael Lane is a soldier of the cross, tasked with carrying out God’s justice. But what does being God’s Dark Knight actually mean? Our new Azrael is presented with several conflicts that test his merit, both as a person and as a hero. To an extent, how he fares is up to the reader to decide. But keep in mind, this book implies that the Suit of Sorrows (which Azrael wears as his armor) will one day drive Michael Lane insane.

I really want to give this book to a Catholic minister, just to see what his/her reaction is. At the end of the first issue, we see an image of Lane being CRUCIFIED. I’m not a heavily religious person, and that surprised me. I can only imagine how a devout Roman Catholic would feel.

The book also touches on the Israel/Palestine conflict. Lane is a war veteran, having served in Iran. In the third issue, he protects a Palestinian who has been savagely beaten in a heavily Jewish area of Gotham. Then, he and his former batallion-mates confront another fellow soldier who’s been killing Muslims in Gotham City. Lane has to decide whether this man deserves to live or not. The decision he makes is a bit surprising.

We also get appearances by Batman & Robin, Huntress and Ragman. Solicitations advertise Azrael as “a crusader forever linked to Batman’s destiny.” (But do they mean the Dick Grayson Batman, or the Bruce Wayne one?) Batman is also featured on this book’s cover, presumably to boost sales from casual readers. I’m really hoping this book doesn’t go the way of Gotham Central and get cancelled in the midst of its prime. I’m really enjoying this series, if for no other reason than it’s not afraid to be in that religious realm. But at the same time, it’s not preachy. Best I can tell, Azrael’s adventures are never intended to be anything but fantasy. Still, some of them make you ask moralistic questions of yourself, and that’s pretty cool.
Posted by John "Zanziber" Rogers at 6:00 AM
Email ThisBlogThis!Share to TwitterShare to FacebookShare to Pinterest
Labels: Reviews