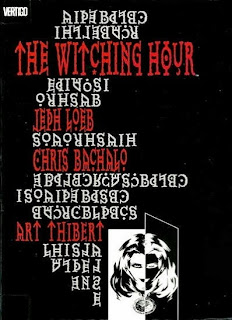 The original title the Witching Hour was a quirky, highly readable anthology comic from DC’s 1970s horror/mystery stable, with the early issues particularly memorable due to some extremely tasty contributions from arch-stylist Alex Toth. The pithy, spooky, mordantly ironic yarns were recounted by three iconic hosts representing the Wiccan concept of maiden, mother and crone and nominally based on the Weird sisters from Macbeth: namely Cynthia, Mildred and Mordred. The series ran from 1969 to 1978.

In 1999, with the company’s Vertigo imprint successfully reinventing the horror comic month by month, a number of old properties were given the proverbial fresh spin and Jeph Loeb and Chris Bachalo produced a delightfully dark, character-driven mystery yarn as a three issue prestige-format miniseries, promptly collected in a volume that unjustly vanished with nary a ripple of comment. Hopefully this time out it will garner some better press and attention…

In Manhattan, vivacious, exotic Amanda Collins visits a disparate, desperate selection of characters, daring them to trade-in their pasts and seize new futures. Dispensing blank business-cards and new realities to the lost, lonely and dangerous with but a wish, she seems the epitome of wild chance and missed opportunities, but Amanda too is a prisoner of the past, with a sorcerous heritage reaching back to 1660 and a romantic clash between Christian propriety and pagan license.

As other mysterious mystics also enfold fate-touched mortals in some enigmatic grand scheme – are they Amanda’s coven comrades or opponents in some grand game? – a centuries old debt is assessed… and perhaps repaid…

Vague as that sounds, it is all you need for this complex, intriguing, savage, seductive, sexy and additively arcane experiment in sequential story-telling. The connections linking Amanda to her own past, her witchy companions and all the apparent innocents who accept her highly suspicious offer are deliberately obscure; thus the tale unfolds on a multitude of levels and the reader actually has to engage the brain to divine the hidden secrets of the Witching Hour.

Bachalo’s art is magic of the purely pictorial kind: as light and airy as clouds and deeply, densely, information-packed like a favorite grimoire. The section collecting his design sketches are sleek and pretty, everything an art-lover could want to see.

This is a book that washes over you like a wave, all mood and moment, and will offer a rare challenge for adult readers tired of being spoon-fed their fiction-fix.
Posted by John "Zanziber" Rogers at 6:00 AM
Email ThisBlogThis!Share to TwitterShare to FacebookShare to Pinterest
Labels: Reviews