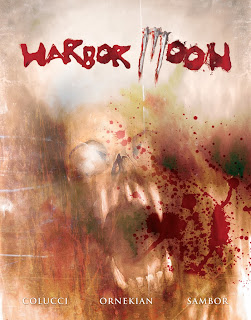 When Ryan Colucci tweeted that he'd send signed copies of Harbor Moon for only $10, I couldn't resist answering the call. I don't regret adding this graphic novel to my collection at all. It takes an old story (werewolves versus hunters), and gives it a modern flair and flavor.

Yes, this is a werewolf story, and I’m really not that interested in traditional monster stories – that’s just the way I am, man! However, this is an interesting comic for a few different reasons – Colucci spins it just enough to make it entertaining, if not a completely unique take on werewolves, and the art is quite cool. In the story, a man named Timothy Vance ends up in the town of Harbor Moon, Maine, looking for his father, who invited him to the town but was then killed under mysterious circumstances. Vance finds that the townspeople, like any good townspeople in weird towns in horror stories, aren’t particularly friendly to outsiders and not interested in helping him out – the sheriff simply lies to him about the presence in town of any O’Callaghans (his father’s name). We know this has something to do with werewolves, but we’re not sure what it is. Colucci does a nice job at hinting around at what’s going on and dropping enough hints before revealing the true reasons things are happening – unlike long-running serials where one sometimes wonders if the writers have worked everything out before they start dropping clues, Colucci has to wrap everything up in one book, and he does a nice job balancing the need to explain things to us with the need to tantalize us with a mystery.

I don’t want to give too much away about the story, but the writers manage to take very familiar werewolf tropes and twist them just enough – the werewolves are just people, for instance, both good and bad, even in monster form – that it’s not too annoying. What Colucci and Ornekian do well is give us characters who work pretty well even if they’re not monsters – Timothy is searching for his family roots; Sheriff Sullivan and his son, Patrick, are trying to protect their secrets, even if they might go about it in an extreme way; Kristen, the love interest in the story, wants to trust Timothy but knows she might not be able to. The villains in the story are cardboard characters, which hurts the book just a little, as the book isn’t really too much about the villains, so it’s not too big a deal. Stories are more interesting when the villains are compelling, but for this book, Patrick is kind of the villain, and Colucci and Ornekian do a decent job with him. The book moves along well as Colucci and Ornekian drive the plot nicely, and while it doesn’t rise too far above a standard werewolf tale, the writers make a good try and change things up enough to make it at least interesting.

Sambor is an interesting artist, and he seems heavily influenced  by Ben Templesmith; but his figure work isn’t as strong. He definitely does better with “set pieces,” I suppose – posed drawings of single people where he can take his time a bit. When he gets into characters interacting with each other, he struggles a bit more, but it’s not like the art is awful or anything. As I read through this, I was expecting the inevitable showdown between the werewolves and the villains to not come off well, but it’s better than I thought it would be … although there are some issues. Sambor draws the wolves very well, which helps the big showdown, but because he uses a lot of “special effects” (blurring, electrical effects, blood splatter), because the coloring on the book is naturally a bit darker, and because Sambor’s male characters look very similar, it’s often hard to tell what’s going on. On the one hand, that’s kind of neat, because it’s a messy, quick battle, but on the other hand, it’s hard to tell what’s going on!

Harbor Moon isn’t a great comic, but it’s a very entertaining book, especially if you’re inclined to like horror.
Posted by John "Zanziber" Rogers at 6:00 AM
Email ThisBlogThis!Share to TwitterShare to FacebookShare to Pinterest
Labels: Reviews