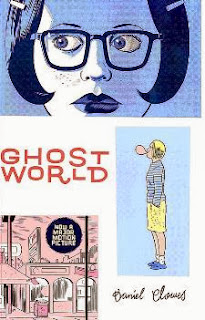 The relationship between comics and Hollywood has always been a difficult one. Comic adaptations of movies are often slapdash and careless. While movie-makers are prone to taking liberties with characters, bending them to their own needs and alienating fans in favor of the mass market. Which is one reason why it was so refreshing that, while adapting Ghost World for the silver screen, director Terry Zwigoff involved creator Daniel Clowes in making of the movie. Having said that, we maintain that it’s always best to consume the original version before the copy, so catch the graphic novel first if you haven’t already seen the film.

Ghost World is the story of two teenage girls, struggling to leave the childish things of their past behind but finding the alien landscape of adulthood to be strange and unforgiving. The girls are superbly realised, surrounded as they are by a host of caricatures – the extremist teenager who rebels against liberalism, the shy young boy who finds himself at the wrong end of the girls’ sexual frustrations, the parents who can’t do the right thing and a supporting cast of assorted weirdoes.

Clowes’ artwork is black and white, but adds green as the go-between. At first this seems a bit strange, as the black on white would be more than sufficient, though the extra colour adds a subtlety of depth that shades the world with a ghostly and atmospheric hue, brining the teenagers’ world alive.

This book is a fascinating insight into the mind of the disenfranchised youngster, and anyone who can remember being there will probably understand the journey the girls are going on. Insecurity, anxiety, frustration and inevitability are mixed with friendship, love, independence and fun. It’s a heady mix that Clowes captures wonderfully with poignant dialogue and drawing that’s very easy on the eye.
Posted by John "Zanziber" Rogers at 6:00 AM
Email ThisBlogThis!Share to TwitterShare to FacebookShare to Pinterest
Labels: Reviews