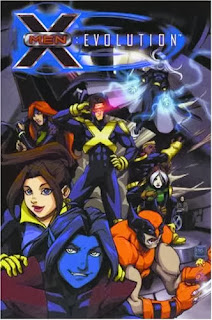 The X-Men have had so many incarnations and character shifts over the years that they would make soap opera writers jealous. It can be confusing beyond belief to try to disentangle as a newbie, as any can tell you, especially all those intrigued viewers of the recent movies who now want to get in on the story. My friends, I wish you luck.

One of the most fun by far, however, is the recent cartoon X-Men: Evolution, speculating on the teenhood of many of our favorite X-Men under the care of Professor Xavier. The cartoon has gained a large audience of both kids and adults alike — deservedly so, given its smart dialog, streamlined animation, and true to character storylines and issues. It seems ridiculous that their teen years weren’t explored before — when were any of us not an outcast of some kind in high school? This graphic novel takes one step further back from the cartoon and shows us the origin of the show’s arrangements, tracing Xavier’s discovery of all of the mutants we’ve come to know and love on the show. The artwork, though certainly in the style of the cartoon, has more detail and shading and works well. The story, though
Posted by John "Zanziber" Rogers at 6:00 AM
Email ThisBlogThis!Share to TwitterShare to FacebookShare to Pinterest
Labels: Reviews