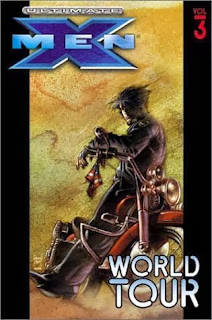 Before the X-Men leave on a globetrotting mission to spread their message of human/mutant fellowship, Charles Xavier feels the need to pontificate on the subject, at length, in writing. Yawn.

Then the team is off to London to spread their message in person and, if need be, break a few heads. That becomes necessary more quickly than expected when the psycho son of Xavier and mutant researcher Dr. Moira McTaggert breaks free of captivity in Scotland and begins inhabiting the bodies of passersby or, as the mood strikes, killing them.

Turns out Xavier hasn't been a very good father.

Meanwhile, Cyclops and Marvel Girl get some squeeze time in St. Petersburg as they seek out the missing Colossus, who has returned home for a bit of "normality" in his life. Ha! Doesn't he realize a submarine is lying at the bottom of the ocean in need of his assistance??

Xavier decides to disband the X-Men. And Gambit makes a solo appearance.

World Tour is an action-packed chapter in the Ultimate X-Men series, but it continues to fall short of its potential. The spark that has made other books in the Ultimate line so exciting has yet to burst into flame.
Posted by John "Zanziber" Rogers at 6:00 AM
Email ThisBlogThis!Share to TwitterShare to FacebookShare to Pinterest
Labels: Reviews